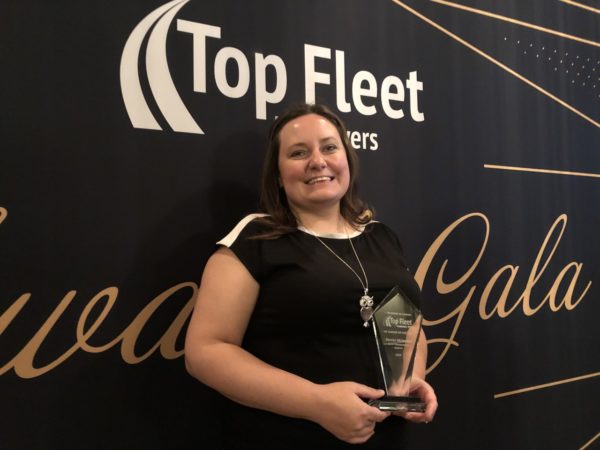 Caron Transportation Systems’ Denise McJannet has been named HR Leader of the Year.

“This is a huge honor. I’m grateful to the company I work for and my team,” the fleet’s HR manager said when accepting the award, noting that Caron is committed to changing the image of drivers. “If I hear the word ‘truck driver’, it’s a swear word at our company. They’re ‘professional drivers’ – and that is something that we preach, that is something that we try to do. And in my opinion, HR needs to be a partner with operations, and not try to put roadblocks in their way. How can we solve their problems?”

“Known for her open, collaborative leadership style, she makes positive contributions to the company and the industry as a whole,” said Ross Reimer of Reimer and Associates, when presenting the honor. In addition to spearheading changes to her company’s driver orientation program and supporting mentorships, McJannet also played a leading role in the Women Building Futures program that will train women as drivers, he said.

Sixty-three fleets were recognized as Top Fleet Employers this year, following a process that measures HR practices against industry-specific benchmarks known as standards of excellence. Information is gathered through online applications and employee surveys.

Several other HR awards were presented through the gala.

The Top Private Fleet Award went to Trailer Wizards of Mississauga, Ont., while One for Freight of Milton, Ont. received the Top Small Fleet Award. The Top Medium Fleet award went to Q-Line Trucking of Saskatoon, while Manitoba-headquartered Bison Transport was recognized as the Top Large Fleet. Each had previously earned the same honors during the program’s six-year history.

The Achievement of Excellence for Workplace Mental Health was awarded to Joseph Haulage Canada. Its Gear Down Campaign encourages all employees to learn about mental health and take part in mental health activities.

XTL Transport earned the Achievement of Excellence for Women in the Workplace.

“We are honored to recognize employers who work year-round to provide great workplaces for all their employees,” said Angela Splinter, CEO, Trucking HR Canada. “With fleets under pressure to attract and recruit workers, being a Top Fleet Employer certainly helps these fleets stand out from the crowd.”