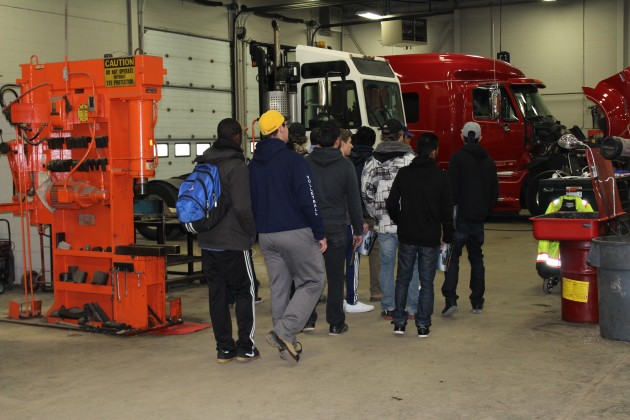 Students taking a tour at Carrier Centers in Woostock, Ont.

WOODSTOCK, Ont. – On Dec. 8, Carrier Centers, a truck dealership in Woodstock, Ont., hosted an open house for high school students in an effort to get the teenagers exposed to the different career options in the dealership and the transportation industry.

Carrier Centers teamed up with Conestoga College (that offers the truck and coach –  International Technical Educational Program [ITEP]) to put the event on from 10 a.m. to 2 p.m. The day involved seminars and presentations from different members of the dealership’s staff and the college took time to explain details of the ITEP program and how affordable the college was. The dealership also fed the students for the day and made sure to put a larger focus on the parts department when the students got a tour of the place.

According to John Werkhoven, vice-president of service for Carrier Centers the day was a major success as they saw students from high schools in Brampton and London, Ont.

“I didn’t think it would be attended like this,” he said days after the event. “I was ye of little faith, but our marketing department worked very well with the college and there was 80 students who attended.”

Out of the 80 students who attended, Werkhoven said that about 20% of them were “keenly interested” in the topics discussed that day.

“I think it’s a good ratio because the reality is, there is a huge shortage for skilled staff regardless of what trade you’re in,” he said. “And we need people to see that it’s a viable and good way to make a living…and that you don’t just have to go to university to make good money.”

Werkhoven said that though the dealership plans on doing these open house events for students at least once a year, he hopes that eventually parents of high school students will push their children into the trades.

“The big thing is how do we get the parents to understand that is a valuable job?” he said. “The trades are almost like an afterthought…mechanics are not just grease monkeys and that (stereotype) has been around for 30+ years…and it’s a fallacy. It’s wrong. To be a tradesperson is something to be proud of because you’re helping the country and the economy and it’s nice to take something that’s broken and be able to fix it…If you do a good job and you do your best, you will never be out of work. Now how many places can say that? Why don’t (more people) consider trades? Because mechanics are getting upwards of $40/hour now and that’s a good living.”

Werkhoven said that local high schools in Woodstock on planning on attending the next open house in January and that he is excited about these future “career days” within the dealership. 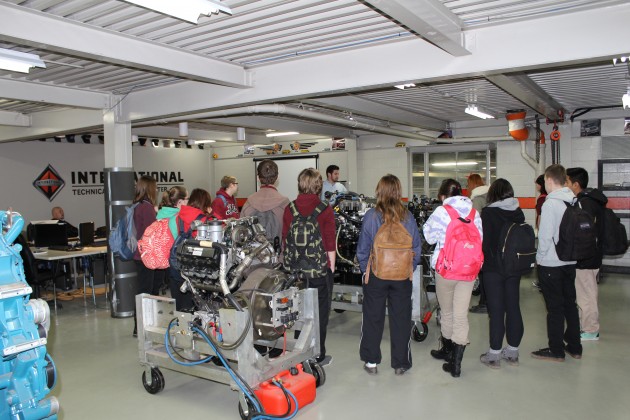 “We have to get to the young people before they make a decision that might not be their best decision,” he said. “They don’t know the alternatives and it was nice to see the fire in some kids’ eyes that day… because once you have your licence and that hangs on a wall, no one can take it away from you. I’ve never been unemployed. I’ll be 56 next week and I started when I was 17.”

The ITEP program at Conestoga is offered through a partnership with International Trucks and promises that graduates will be well-versed in general and specific trade-related academics, safety training and will have the necessary technical skills needed in the truck and coach trade specific to International equipment.

“Thanks to the ITEP program, we are going to employ one of the students who’s almost done,” added Werkhoven. “It’s a young lady we’re hiring and she’ll be working in our London location. She’s very excited to join, and we’re pleased with her.”