TORONTO, Ont. — The Canadian trucking industry is in the midst of a cultural and demographic evolution. The good ol’ boys who grew up on the farm and could dismantle an engine and transmission with their hands are getting older and retiring, and young people aren’t seeing the allure of the open highway.

Attempts to draw women to the trucking industry have been largely unsuccessful to date, but immigrants have eagerly stepped up into the role as a viable way to generate a steady income soon after arriving in their new country. South Asian drivers represent by far the fastest-growing segment of the industry, especially in metro areas such as Toronto, where 53.9% of drivers are now of South Asian descent.

These demographic changes will come as no surprise to anyone who’s been in the trucking industry for more than a few years. However, these observations to date have largely anecdotal in nature. Just how deep into Canada’s trucking industry have South Asian drivers extended their roots? Why aren’t more women pursuing a truck driving career? What has become of the old-school Canadian trucker? How are fleets adapting to the rapidly changing driver demographic?

To answer these questions, and help the industry better understand the demographic changes that are occurring within the industry, Truck News – along with sister Newcom Media publications Truck West, Today’s Trucking, Transport Routier, and Road Today – is launching an unprecedented, multi-month series on The Changing Face of Trucking.

We have comprehensively analyzed Canadian census data to identify and confirm employment trends. These will be broken down in each of our respective magazines based on the geographic area they serve. Truck News will focus primarily on Ontario and provinces east. The statistical breakdown will be complemented with feature articles, news stories, and personality and fleet profiles, that examine issues related to the changing demographics in the Canadian trucking industry and highlight the contributions of the many ethnicities that comprise the industry today.

We will not shy away from the touchier subjects, including racism in trucking, and how to effectively and sensitively integrate minority drivers into your business. But to launch this series, we will first look in detail at the data.

Where are the women?
Women make up nearly half of Canada’s workforce, yet their representation on the front lines of the trucking industry is a woeful 3-4%. This despite ramped up efforts over the last decade to draw more women to the industry. The U.S.-based Women in Trucking Association was launched in 2007 to raise the profile of women working in the trucking industry, and to better educate women about the career opportunities that exist. 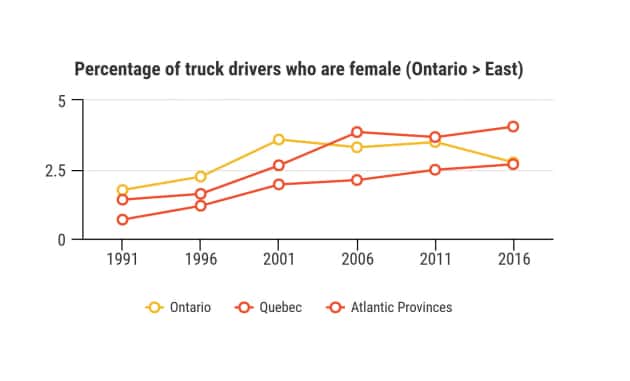 It was joined by the Women’s Trucking Federation of Canada, which aimed to create a support network for women in the trucking industry, as well as to expand the employment of women in trucking. But as of the last census report in 2016, there was little movement on this front.

Looking at Eastern Canada data, only the Atlantic provinces have steadily grown the percentage of women working as truck drivers, albeit at a slow pace. Ontario actually saw a decrease from the 2011 and 2016 census years, while Quebec leads the way with women making up more than 4%.

David Brown, a recruiter for Courtice, Ont.-based CCT Auto-Trans, says his company has made efforts to recruit women drivers – with little success.

“We are canvassing for women drivers as we speak, but have had no response,” he told Truck News. It’s a demographic he’d like to see better represented in the industry.

“They are better drivers and more compatible to the customers,” he contended. “Women are not given enough opportunity to prove themselves in this industry.”
Shelley Uvanile-Hesch, CEO of the Women’s Trucking Federation of Canada, is more optimistic.

“While the numbers (of women in trucking) seem low, let’s take a moment to celebrate the fact that the number continues to grow,” she said.
Uvanile-Hesch would like to see teachers, guidance counsellors, parents and other influencers keep an open mind about the opportunities the trucking industry presents to women.

“There are still career influencers who discourage women from entering the professional driver occupation,” she said. “The more we do to educate women, support employers, and inform the public through positive media promoting the successes, the more women we will see coming to trucking for their place at the wheel.” 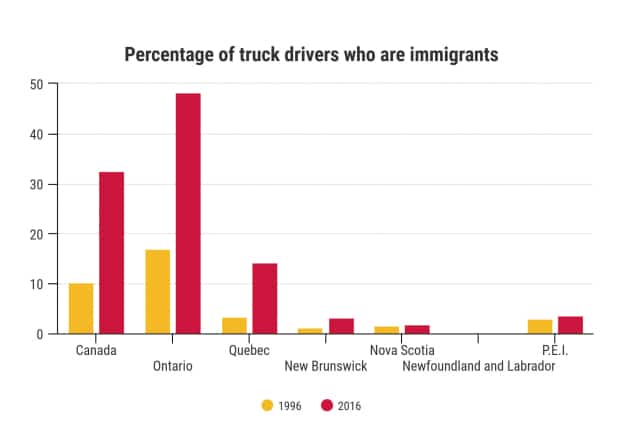 “The exponential growth of South Asians in the trucking industry as seen in the last 20 years is not surprising and has many reasons,” he said. “During this period, there has been an increased flow of immigrants arriving from South Asia – especially India – due to welcoming immigration policies, family reunification, and of late through international students.”

He said many of these immigrants do not have their educational credentials recognized here in Canada, and turn to trucking, where they can quickly begin earning an income.

“The ongoing shortage of qualified workforce and changing demographics also are contributing factors,” he explained.

He said most South Asian immigrants gravitate towards the suburbs of Toronto and Vancouver, where they are welcomed by a supportive community. These areas also host a large number of freight-related businesses, Gupta noted, which “further attracts the newcomers to join the trucking and logistics industry.”

But most importantly, these newcomers to Canada see the trucking industry as an opportunity to fulfill their dreams of achieving a better life.

“The trucking sector provides a decent income level to start with, and thus fulfills the Canadian dream,” said Gupta.

“With ample emotional and financial support from extended families, peers, cultural and religious groups, the South Asian community has been able to make the best and creative use of the opportunities. This ultimately has made them a force to be reckoned with, (and to make) a significant contribution to Canada’s trucking industry.”

Visible minorities in general – not only South Asians – continue to make up a greater proportion of Canada’s driving force. This is especially true in Ontario, where in 2016, 35.3% of truck drivers identified as a visual minority. This was up sharply from 10 years earlier when only 4.67% did so.

With the influx of immigrants to the trucking industry comes greater diversity in languages spoken. In 2016, 20.5% of Ontario truck drivers listed Punjabi as their primary language.

Immigration has been the Canadian trucking industry’s top source of new drivers. In 1996, only 10.2% of Canadian truck drivers were immigrants, but this climbed to 32.5% by 2016.

This was even higher in Ontario, with immigrants making up 48.2% of the driving population as of the latest census in 2016.

As with visual minorities, immigrants to Canada still make up a very small percentage of the trucking industry in Atlantic Canada. TN

More coverage from Newcom Media’s deep dive into The Changing Face of Trucking can be found on pages 17-19, and in the coming issues of our entire family of trucking publications.