“We’re definitely going to have electric vehicles. It’s going to be there,” he said during a media briefing at the Texas A&M Transportation Institute.

These same vehicles, though, will have lubrication needs of their own.

Thermal fluids will be needed to cool electric motors, inverters, and motor windings, and to support battery thermal management. Specialized process oils will be needed to protect battery membranes, too. There will be greases to lubricate electric motor, wheel and steering bearings, and the transmission lubes for reduction gears and differentials.

There are also conductivity issues to consider when copper wires and fluids mix. “Not everything is going to be coated,” Brown said. And transmissions in electric vehicles will turn at higher rates, requiring improved controls against foam. 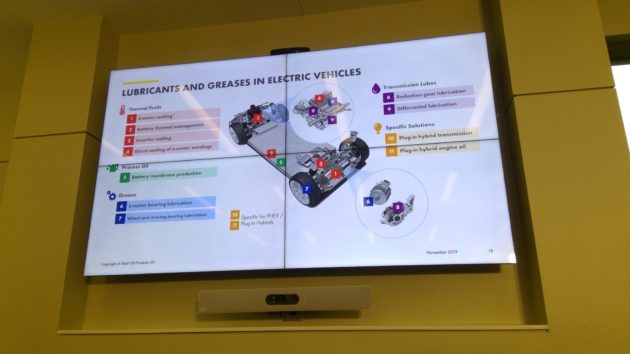 As important as electrification will be, Shell believes the battle against CO2 emissions will also require more than one energy source.

Oil and coal are still abundant and practical fuel sources, he observed, referring to the infrastructure that’s already in place to transform them into energy. Even electric vehicles need infrastructure support because today’s grid couldn’t handle everyone plugging into an electric car. A grid capable of doing that is still expected to be decades away.

Shell itself is taking a broad-based approach to energy. It’s building retail sites for hydrogen, and investing in conventional and advanced biofuels alike. In terms of electrification it is investing in slow and fast-charging stations for electric vehicles, while also supplying compressed natural gas (CNG) and liquefied natural gas (LNG). It’s one of the pioneers in gas-to-liquid (GTL) fuel as well as nature-based solutions.

None of them will be a “silver bullet,” Brown stressed, referring to the drive to reduce CO2 emissions. “The best way to do that is to invest in all of them.”

“Natural gas is pretty available globally,” he said as an example.

Existing resources could offer more than 230 years of the fuel at current production rates, Shell projects. And gas-fired power plants emit about half the carbon dioxide of their coal-fired counterparts. 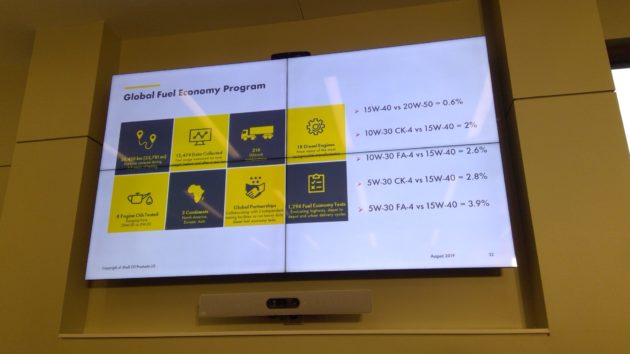 Over the last 2-1/2 years, Shell has compared eight engine oils ranging from 20W-50 to 0W-20, in markets around the world. And it has seen differences in the different oil weights through evaluations in on-highway, depot-to-depot, and urban delivery cycles.

Major OEMs already recommend a 10W-30 CK-4 oil for their engines, Brown said. Trucks around the world are collectively leaving billions of dollars in fuel savings on the table if they don’t use it.

Reaching for the Starship

Hotel loads were powered with a roof-mounted solar panels, while 6×2 axle configurations reduce weight and friction. Low rolling resistance wide-base tires and automatic inflation systems improved rolling resistance in their own right. And an active grille cooling system closed when cooling was not needed, to improve air flow.

It hauled 39,900 lb. of reef material between California and Florida.

“We’re going to do more. We think there’s more to be done with this truck. We are going to make some improvements,” Brown said, referring to another demonstration run planned in 2020. “We still think there’s some story for the Starship Initiative.”