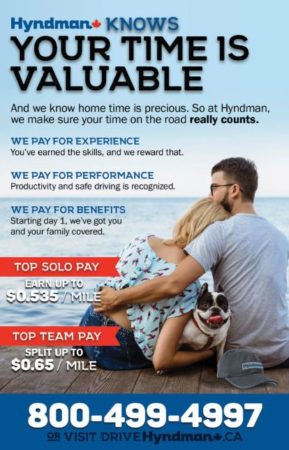 Those were the days: A Hyndman recruitment ad from 2017.

Justice Glenn A. Hainey’s ruling came Thursday, just days after Celadon agreed to the receivership, following a motion by a lawyer representing Hyndman’s former employees, who are owed more than $2.3 million.

Last week Hainey had barred Celadon from selling Hyndman’s assets, and on Monday he ruled that “no cash can leave the Canadian company” before a receiver is appointed.

Hyndman’s headquarters in Ayr, Ont., is valued at $12 million.

Lawyer Andrew J. Hatnay said Thursday the court has yet to appoint a representative counsel to the employees.

He has called the judge’s decisions “very helpful to Canadian employees and creditors”.

Hundreds of Hyndman employees have been exploring their options since early December, when the company shut down without warning after Celadon filed for Chapter 11 bankruptcy protection in the U.S.

Hatnay is representing more than 250 of the 400 former employees. KSV Advisory provides restructuring services to distressed companies. Executives at KSV were not immediately available for comment.