ATLANTA, GA – Seven trucks have proven that 10 miles per US gallon (23.5 liters per 100 kilometers) is possible using technologies on the road today.

Trucks participating in the North American Council of Freight Efficiency’s Run on Less demonstration rolled into the Georgia World Congress Center just in time for the opening of the first annual North American Commercial Vehicle Show on Sunday, having logged about 80,600 kilometers since starting their journey September 6, and achieving an average of 10.1 miles per gallon (23.5 liters per 100 kilometers) during the cumulative 99 days of driving. 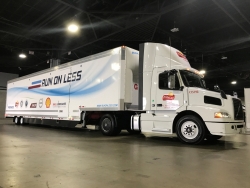 According to NACFE, if the 1.7 million trucks on the road in North America achieved the same level of efficiency as those on the run, they would save US $24.3 billion per year, keeping 98 million tons of carbon dioxide out of the atmosphere.

From large fleets like PepsiCo’s Frito-Lay division to a single owner-operator in Albert Transport, NACFE operations lead Mike Roeth said the aim of the run was to be as real as possible, with real trucks, on real routes, carrying real freight. The trucks conducted their daily business, in a live environment, in all kinds of conditions. Roeth noted that all of the trucks faced either hurricane Harvey or Irma during the run.

The fleets were asked to participate with fuel-efficient trucks and technologies they already used and trusted. Roeth said the fuel-efficiency test it wasn’t strictly a challenge to hit the best miles per gallon, meaning some of the fleets decided not to use technologies they had tried in the past but wouldn’t use or recommend again. All the technology used is commercially available now. 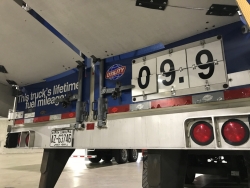 Owner-operator Henry Albert said it was an honor being chosen for the run. Since buying his current truck in March 2017, Albert says he’s been asked to perform numerous demonstration runs, which lowers his overall lifetime fuel mileage average to 9.9 mpg (23.76 liters per 100 kilometers), but he was happy to have three weeks of actual freight hauling during Run on Less, to bring his “A-game” to the fuel-efficiency drive. Even so, driving through Hurricane Harvey was business as usual.

“It’s just another day driving,” he said. “The load’s gotta’ go. You go until it’s a problem.”

Data for the trucks was provided by Geotab telematics devices to Yunsu Park, an analyst with Run on Less, who combined the real-time information with scale tickets and fuel reports the drivers provided, as well as weather data, to create an accurate picture of how the trucks were doing and what affected fuel economy.

While other telematics companies have reported recently that an approximate 30-35% of trucks contain tested devices currently, Park says the t number is sure to skyrocket with the coming Electronic Logging Device mandate, and the data fleets will be able to get their hands on will be valuable in the fight for fuel efficiency.

“You make decisions with data, not with emotions,” Park said, noting that the data companies have at their fingertips through telematics devices make it possible for them to see where they can maximize efforts to save the greatest amount of energy.

Run on Less will produce a report on the event that will be released in the spring, but companies looking for more can look on the website, where data is available now, along with a video about the project.