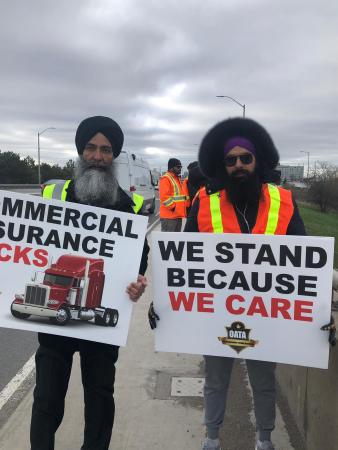 Protesters from OATA are focusing their attention on insurance rates. (Photo by OATA)

BRAMPTON, Ont. – A group identifying itself as the Ontario Aggregate Trucking Association (OATA) took to Toronto-area highways on Wednesday in a rolling protest against rising insurance costs — and they plan to return.

Dozens of their dump trucks formed convoys and choked traffic on routes including the Gardiner Expressway, Don Valley Parkway, and Highway 427 as commuters headed to work.

Owner-operator Jagroop Singh, OATA’s president and founder, confirms that the protesters have applied for a permit to gather in front of the provincial legislature next week.

Insurance rates have increased by double digits in recent years, while several insurers have suddenly dropped coverage for aggregate haulers, he told trucknews.com. Compounding matters, truck drivers who want to begin hauling sand and gravel are facing requirements for three years of experience – essentially blocking new drivers from the sector, he said.

“Rates have Doubled or Policies Denied,” protester Binder Singh posted on his facebook page last night, referring to what he called unfair commercial insurance hikes and manipulated rates. “All Trucking companies and Industry is at a breaking Cricis [SIC] Point for Survival.”

Ontario Transportation Minister Jeff Yurek criticized the protesters when providing comments to Toronto-area media. “I wouldn’t support anyone protesting by stopping on our 400-Series highways at all. I think that’s wrong,” he said, according to CityNews.

The gravel haulers made headlines during protests in September 2016, when they occupied Ontario Ministry of Transportation inspection stations in Milton, just west of Toronto. That protest focused on a crackdown on rules governing axle weights. 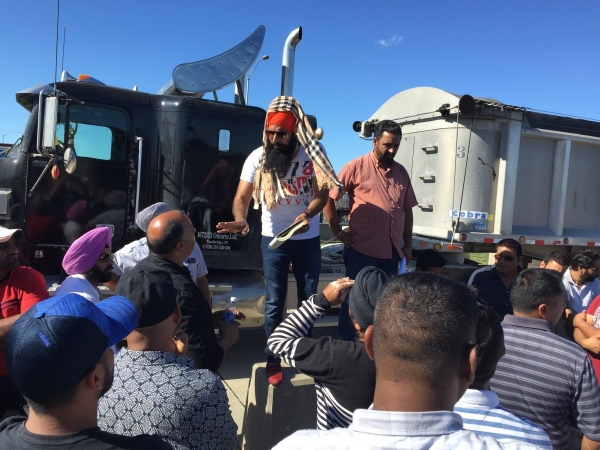 Jagroop Singh, OATA’s president and founder, made headlines in 2016 while protesting a crackdown on axle weights.