NIAGARA FALLS, ON – Canadian fleets face several new legal challenges this year in the face of plans to renegotiate the North American Free Trade Agreement, as well as a recent Supreme Court of Canada ruling that could offer federally regulated drivers a job for life, an industry lawyer says. 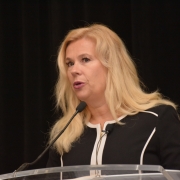 Heather Devine, a partner with Isaacs and Company, points to the pending U.S. mandate for Electronic Logging Devices as an example. That applies to cross-border drivers as of December 18. But during a presentation to the Private Motor Truck Council of Canada she said the devices could become one of the bargaining chips in trade negotiations. “I’ve heard that there are those discussions,” she warned, referring to talk of a future Canadian mandate that mirrors rules in the U.S. “It’s coming.”

The recent Wilson v. Atomic Energy of Canada ruling by the Supreme Court, meanwhile, essentially guarantees drivers who cross provincial borders “a job for life” – if fleets are not careful, she said. Citing the Canada Labor Code, the court ruled that non-managerial employees with more than 12 months of service can’t be terminated without reason.

Establishing just cause to terminate someone involves proving serious misconduct, habitual neglect of duty, or incompetence, she said. But even a bad accident is not proof of incompetence. Neither is missing work, poor performance, some acts of violence, or drug and alcohol use linked to addiction, she added.

Devine stresses the need to hire these workers on fixed one-year contracts, and completing performance reviews before the terms are done. Even then, the contracts should be renewed annually rather than being evergreen.

“You have to document details of the breach,” she added, referring to the need for a paper trail that aligns with a progressive discipline policy. “You need to have a system for documentation. That means taking notes.”

Also on the horizon for Canadian carriers is the pending legalization of marijuana – a drug that can remain in a driver’s system for a period of time. “It may still be in their system when they show up for work, so what are you going to do?” she asked the crowd. Corporate drug and alcohol policies need to be updated, and Devine also stresses the value of pre-employment, reasonable-grounds, post-incident and random testing, as well as tests that are part of a rehabilitation plan. “Make sure that your tests are legal,” she said. That means recognizing addiction is a recognized human right issue, requiring employers to pay for medical assessments and treatment, offer Employee Assistance Programs, and allow people to return to their jobs after treatment. Fleets are expected to pay for care after treatment, and the medical costs related to the disability, too.

Then there are the distractions in the form of personal electronic devices. Transport Minister Marc Garneau has promised a national standard to crack down on distracted drivers using cell phones, she said. In the meantime, fleets will want to review their policies, educate employees, and discipline those who run afoul of the rules. And take care of the language, she said, noting that she has seen policies that could be misinterpreted to mean that drivers should text dispatchers while on the road.

The distinction between employees, dependent contractors, and independent contractors also tends to present a continuing legal quagmire. The relationships for independent contractors should be able to pass a four-part test for the Canada Revenue Agency, as well as standards set by provincial and federal labor ministries, she said. Ultimately, if a fleet is monopolizing someone’s time, the driver is likely a dependent contractor and will be seen as an employee. That means there needs to be deductions for the Canada Pension Plan, Employment Insurance, and income tax. “There are penalties if you get it wrong,” she said. One way to ensure the definition is correct is to ask for a ruling before the end of a year. Rulings issued before the end of June apply to the previous year. “It’s a lot less expensive to get a ruling ahead of time.”

Some jurisdictions also present bigger legal challenges than others. “If you’re crossing the border and you’re Canadian, you have to prepare for those horrendous judgements that can come down in the United States,” she said, referring to a $100-million ruling as an example. Devine recommends separating cross-border activities into a separate company to limit liability: “Take a look at your organization and say to yourself, ‘Can a plaintiff get beyond my insurance?'” It’s also a good idea to build a relationship with a U.S. law firm before a case arises. “When you need a lawyer,” she added, “that’s when they’re hard to find.”

Cargo theft leads to another potential challenge, and Ontario was second only to Texas when it came to such losses in the first quarter of 2017, she said, citing data from CargoNet. “Make sure your insurance covers theft.” Secured yards, warehouse locations and parking lots become particularly important.

The legal issues are not even limited to the fleet itself, she said, referring to those who broker backhauled freight. The liability limit of $2 per pound applies in cases except where Declared Excess Value is involved. A contract of carriage will help to define who is responsible for losses. These documents should manage Bills of Lading, assign responsibility for losses to the shipper or carrier, and clearly state the limitation of liability, she said. “[And] make sure that your insurance matches the highest cost of the load.”