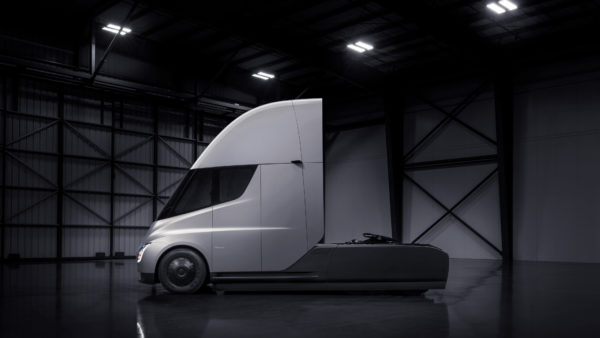 The CEO of the electric vehicle company said he was “optimistic” new specs on the truck would exceed previously released versions.

Earlier this month the truck was put to the test as it hit the road from Tesla’s Gigafactory 1 in Nevada, fully loaded with battery packs and headed for the factory in Fremont, Calif., 259 miles (417 kilometers) away.

Electrek reports the semi has also been spotted visiting customers who pre-ordered the vehicle, like Aneheuser-Busch in St. Louis, Mo., which ordered 40 of the trucks, as well as at charging stations around California.

The pronouncements from Musk about the capabilities of the truck came while he was promoting the vehicle, but weren’t elaborated on, and come during a week when the electric vehicle manufacturer ran into further problems with its Model 3 sedan.

The latest version of the electric car was set to start shipping this spring to the more than 400,000 people who have reserved one, but has suffered numerous delays.

The latest issue with the car came to light this week when current and former employees reported to CNBC News that up to 40% of parts made by Tesla for the Model 3 were faulty and needed to be reworked or recalled.

Employees say the delays are making it hard for Tesla to hit even reduced production targets and are causing bottlenecks on the production line, which had to be temporarily suspended last month to fix the issue.

While Carbuzz reports the company is trying to reassure investors the parts problems are due to their “pursuit of perfection” and the issues found are minor, not everyone was convinced and Tesla’s stock took a tumble on Wednesday, dropping more than 4%.

Other shakeups this week have included Bloomberg confirming two of the company’s top financial executives have left, making them just the latest employees to end up at ridesharing service Lyft, and leaving Musk with the task of stabilizing the environment at Tesla.

The Tesla fully electric Semi is set to begin production next year. Reports say more than 140 pre-orders have been received with a deposit of US$100,000 each. Canadian companies waiting on the truck include Loblaw Companies, Walmart Canada, Fortigo Freight, and Titanium Transport Group.