TORONTO, ON – Leadership skills are universal. There are plenty of lessons to be learned outside the trucking industry itself. And in the midst of the Ontario Trucking Association’s annual convention, executives had the chance to hear guidance from experts ranging from a “Dragon” to a six-time Olympic medalist. 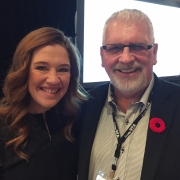 Michele Romanow, one of the leading entrepreneurs featured on CBC’s Dragon’s Den, stressed the importance of risk and embracing lessons through business failures.

“Building a business is really messy,” she said, noting how planning doesn’t always guarantee success. One of her first ventures involved renting a licence to fish for sturgeon, hiring an angler, and collecting hauls of caviar. Plenty of planning went into that. Then the government denied the required export permit, and the market for the fish eggs essentially crashed.

But the money that remained in her account after that failure ended up funding Buytopia, a website that offers online shopping deals. She also co-founded SnapSaves, which was later acquired by Groupon. But for every success, she says there have also been five failures.

“I have never, ever had one of those ‘eureka’ moments,” she added. “It’s impossible to know, as you’re innovating, what you’re going to create.”

The keys of communication

Just how many fleet executives does it take to lower a tent pole? More than you might think.

Performance coach Peggy Baumgartner used a “helium pole” exercise to demonstrate several leadership skills. Fourteen volunteers were asked to line up on both sides of a long tent pole. Once the pole was rested on their extended fingers, which had to remain in contact with it at all times, the group had to lower the pole to the ground as quickly as possible.

It took 3.5 minutes. Still faster than average, but much longer than the crowd expected.

When the exercise began, the pole unexpectedly rose. (The fingers were pushing up toward the stick.) That’s when the management lessons emerged. “We’re all running independent images of how things will unfold,” Baumgartner said. Directions were shouted back and forth. Everyone struggled to come up with a plan. And the stopwatch continued to tick.

It shows that, when the pressure is on, people don’t listen – even if everyone understands the final goal. This leads to struggles in command and control, and the inevitable blame game. The challenge is solved not only by knowing the end game, but asking questions, and improving clarity. Questions themselves also need to be properly structured, involving active listening, probing, clarifying, and reflecting observations, she said.

The fleet execs shouldn’t feel bad. One dysfunctional banking team once spent 20 minutes trying to solve the challenge, Baumgartner said. The quickest group she ever encountered was the gold-medalling women’s Olympic hockey team. Captain Cassie Campbell immediately asked that team for ideas. Whenever something didn’t work, she asked her teammates whether they thought it was a bad idea or just poorly executed. They all grunted when accepting each decision. And they were done in about two minutes.

“For the most part, people want to do a good job,” Baumgartner said. “When people are not where they need to be, it’s because something is blocking them … as a coach, we’re focused on results, but we’re also focused on commitment.”

The value of “smoke” breaks

They weren’t the day’s only Olympian lessons.

Mental fitness requires a combination of perspective, imagery, energy and focus, he explained. “You learn to manage your energy and you learn to redirect your focus.” Focus narrows as someone’s level of arousal increases, but relevant information can be missed if the arousal rises too much, he said. It’s why a quarterback might throw an interception without seeing the defensive player in his path.

While there are limits to managing time, there is no limit to managing energy, he said, encouraging the executives to think of themselves as thermostats that they are able to set.

Control like that comes in part through proper rest and recovery. Sleep breaks down into 90-minute cycles, but naps of less than 20 minutes do a lot to restore energy, he said. Breathing in for four seconds and out for six seconds also helps to relax. Even breaking up the day makes a difference. “We work well in 90-120-minute cycles,” Jensen said, stressing that multitasking is a myth. “Take a break that’s different from what you’re doing.”

For those who think that’s too difficult, consider how smokers find the time for their habit, he said. Take smoke breaks – but without the actual smoking.

The champion cyclist and speed skater told her heartfelt story on the edge, like she could break out laughing or crying with every line. Her father was a raging alcoholic, and her mother traumatized. Her sister was in and out of trouble with the law, and has been in and out of homeless shelters.

“You never know what someone can come back and do and achieve,” she said. “In my school, kids took pride in the trouble they could get into.” She recalled stealing, drinking, doing drugs, and enjoying a cigarette when she first came across TV coverage of Gaetan Boucher’s speed skating.

She vowed to pick up the sport. And she found an escape through athletics, but ultimately succumbed to an addiction to being good. Coaches and sports psychologists helped her recover after falling into her struggles of the past. It’s how she was able to celebrate a bronze, even after her dad answered a celebratory phone call with “Who is this?” and then hung up.

“The only thing that got me better was help. Clinical help,” she said. “Educate yourself. Know what the signs and symptoms are.”