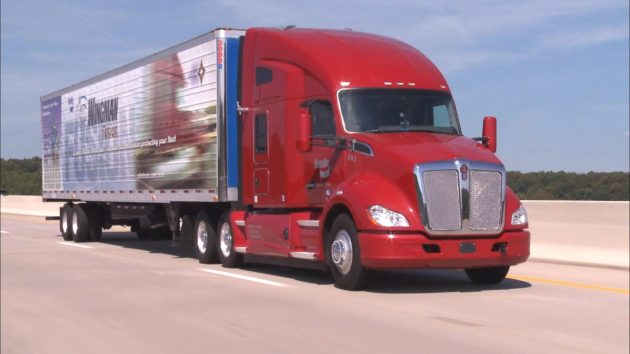 ATLANTA, Ga. – Kenworth’s general manager seem unfazed by a projected plunge in North American truck sales, stressing that the year to come will still represent “more of a normal year” for truck makers.

Fleets had been ordering more trucks than they needed just to ensure the units would be available to support any potential business growth, said general manager Kevin Baney, referring to significant backlogs that have existed.

“Everybody has gotten through that, and I think they were preparing for more of a normal year,” he told media during a briefing at the North American Commercial Vehicle Show. “Next year, the next several years, will just be a good healthy market and will be back for replacement values.”

While truck orders softened in the past three to four months, that has primarily been driven by the timing of fleet purchasing decisions, he stressed, suggesting that order intakes are expected to push higher in coming months.

There are undeniably some tough economic headwinds to come, though. The American Trucking Associations’ truck tonnage index has been volatile in the last few months, and U.S. construction activity is flat. The Purchasing Managers Index (PMI) has also contracted in the last two months. “That’s one to watch,” Baney said.

“We also look at what’s happening within our industry, and probably the most important thing is what’s going on with used trucks.”

Kenworth has adjusted its build rates and incorporated planned shutdowns at the company’s manufacturing facility in Chillicothe, Ohio. Other cuts have been addressed through attrition.

But there is positive news as well.

“Many of the economic indicators are at historically high levels,” Baney added.

Interest in vocational trucks, for example, remains strong because everyone is anticipating strong infrastructure investments, he said. The e-commerce behemoth that is Amazon also recently purchased 350 Kenworth trucks, on the same year it announced plans to expand same-day deliveries. “They’re probably evaluating whether they want to control their own destiny,” Baney said.

Kenworth is planning for the future in other ways, too. Through a partnership with Toyota, the truck OEM has been running tests with hydrogen-electric vehicles. The first five units have been built for a related test fleet. And the interest in zero-emissions vehicles does not end there.

“There are a lot of players that are getting into battery-electric and system development,” Baney said, adding that the technology will quickly develop over the next decade.

Battery-electric technologies still come at a premium price and heavier weights, but government subsidies offset some of the challenges. And while the California Air Resources Board is talking about setting requirements for manufacturers to produce a specific share of zero-emission vehicles, there is also talk about setting percentages for fleets that operate in the state, he noted.

“The rate of product development,” Baney said of various technologies, “is faster than we’ve ever seen.”