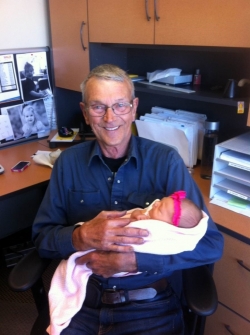 Kane’s family reported the elder Kane, 84, passed away peacefully in his home July 16 after battling cancer.

Len’s Transportation and the Kane family are inviting those that knew him to participate in a Heavy Truck Funeral Convoy, followed by a celebration of life at the Sandman Signature Hotel, on July 29. The convoy will begin at 3 p.m., leaving from the Ranger Transport yard in Surrey, B.C.

Kane Sr., who got his start as a courier in the Vancouver area in the 1950s with just a Harley Davison and a sidecar before graduating to a half-ton pickup, opened his lift truck delivery company in 1964.

A longstanding member of the British Columbia trucking community, Kane Sr. was known as an innovator and a self-taught auto body specialist who designed and built the first lift truck in the Len’s Transportation fleet before those doors opened more than 50 years ago.

Kane Sr.’s fleet grew with his reputation for being able to haul lift equipment and other heavy equipment in the Surrey area, and in 1978 his company acquired Ranger Transport, allowing operatations on both sides of the U.S.-Canada border.

Those interested in participating in the convoy and/or attending the celebration of life should RSVP to Leonard Kane Jr. by phone at 604-290-6743 or e-mail len@lenstg.com before July 28.