INDIANAPOLIS, IN — Mitsubishi Fuso Truck of America is rolling out a battery-powered Class 4, known as the eCanter, but Canadian buyers will have to wait for a taste of things to come.

The first 50 units will be made available to a select group of U.S. customers next year as part of a two year-lease, allowing them to experiment with the technology before trading up to the next generation. The first will be in Canada by 2019. And it comes at a 15-20% premium over diesel models. 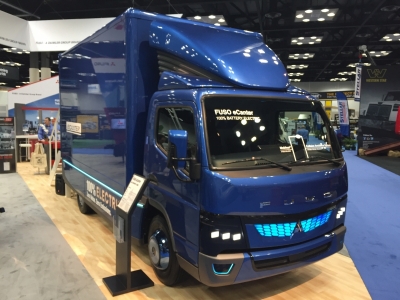 “This is the future of the industry,” said Jecka Glasman, Fuso’s president and Chief Executive Officer, referring to research that shows more people moving into cities. “It’s going to be busy, it’s going to be crowded, but goods are still going to need to be delivered.”

The Class 4 van has a 15,995-pound Gross Vehicle Weight rating, 9,380-pound payload, and 160-kilometer range. Batteries can be quick charged within an hour at a DC charging station, or over an eight-hour period using a traditional 230-volt outlet.

The vehicle’s six batteries – which offer 360 volts and 82 kwh of power — are preconditioned during charging, and the pre-heating will ensure the range is the same in cold weather and summer, says Otto Schmid, director – product management.

With its electric motor coupled to a single-speed reduction gear, there is no traditional transmission. But the motor generates 173 horsepower and 494 lb-ft of instant torque, which will be key when climbing grades, Schmid said. That’s even 34 lb-ft of torque above an equivalent V10 gasoline engine found in the company’s Class 6 truck.

While it looks different than the company’s FE Series cabovers, the drivetrain is fitted to a standard 151.6-inch cab chassis. “Customers and upfitters will find the same maneuverability and the same familiar 33.5-inch-wide frame, same body attachment capability, cab-to-axle dimensions, and box sizes as they’ve enjoyed with our traditional turbocharged diesel cabovers,” Schmid says.

Stopping power will usually come from the two-stage electric regenerative braking system, while HVAC will also be electric, and there’s a high-capacity electric Power Take Off for applications that need tools like liftgates.

Most notably the eCanter will be silent except for an audible pedestrian warning system that makes its sounds at low speed.

We’ll just have to wait for it.