TORONTO, ON – Mack is bringing the power of telematics to refuse vehicles, introducing Mack GuardDog Connect as a standard offering in its LR low-entry cabover models with MP engines.

The system monitors fault codes, giving service teams a tool to diagnose issues, proactively schedule repairs, and ensure parts are available before a truck ever reaches a service bay. And it’s all managed by Mack OneCall agents through the cloud-based Mack ASIST Service Relationship Management tool. 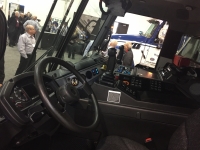 “The waste industry, it’s all about uptime,” said Roy Horton, director – product strategy, during the Canadian Waste and Recycling Expo. “To be able to monitor the engine and transmission and other vehicle faults, alert the decision makers, and then help plan to reduce any maintenance that has to be done, just increases the bottom line.”

Refuse vehicles can face particularly challenging duty cycles. In a city like New York, they could see 1,000 start-stops per day, while suburban counterparts might face the “really nasty environments” in landfill sites, Horton adds. Unlike their linehaul cousins, such trucks also tend to rely more on active regens for Diesel Particulate Filters.

“We can monitor the truck in real time, and if there’s an issue that’s going to take the truck down, we can contact the customer – a phone call, an email, a text message, whatever works for him,” said Curtis Dorwart, refuse product marketing manager. “We can tell him, ‘You’ve got an issue with the truck. It’s going to go down. Maybe not right away, but it’s going to go down soon.’ We can schedule you with a dealer, find out if he’s got the part, get the truck in there, and the dealer knows exactly what to do.”

With GuardDog, fleets can also tap into fleet management services including Telogis cloud-based intelligence software, and Omitracs, which uses GuardDog Connect’s telematics hardware to communicate data such as road speed and idling time.

Earlier this year, GuardDog became a standard offering on TerraPro cabovers, which can serve refuse, concrete pump, dump or mixer applications. It has been standard on Pinnacle, Granite and Titan models since 2013.

The LR model was first introduced to Canadian buyers during the 2015 Canadian Waste and Recycling Expo.

The Mack LR comes in three-axle 6×4 configurations, running on diesel or natural gas. The standard power comes in the form of the 11-liter Mack MP7 diesel, with 325 to 355 horsepower and 1,200 to 1,280 lb-ft of torque. Those who run on natural gas have the option of the Cummins Westport ISL G. Transmissions include an Allison RDS five-speed or six-speed automatic.