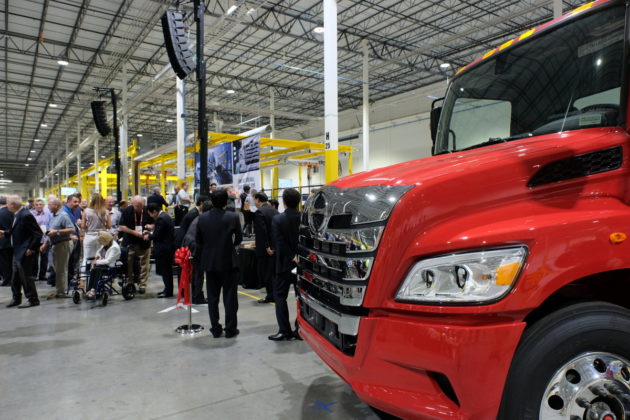 The first truck rolled off the new assembly line in June. Current production stands at 66 trucks per day on one shift. Hino expects production rates to grow to 15,000 units on one shift by 2020.

“Hino is committed to building its trucks and products in the market it operates in,” said Hino Motors president and CEO, Yoshio Shimo. “We have committed $100 million in capital investment into our new state-of-the-art manufacturing facility, generating 250 new jobs. Today, I am excited to announce an additional commitment of $40M to meet increased demand and product configurations, creating an additional 250 new jobs, totaling 800 team members.”

The current workforce stands at 470 team members with plans to expand that to 550 by next year.

The facility will build all of Hino’s Class 6, 7 and 8 conventional trucks, including the newly released Class 7 and 8 XL Series.

Hino Motors began producing trucks on American soil in 2004 at parent company, Toyota’s manufacturing facility in Long Beach, Ca. That facility closed in 2007 and production transferred to Williamstown, WV. Hino produced over 50,000 trucks at that facility. Today the Williamstown plant is vacant but remains a Hino property. All production has since shifted to Mineral Wells. No plans for the Williamstown facility were discussed during Wednesday’s ceremony.

Hino Motors Manufacturing U.S.A. president, Takashi Ono, offered thanks to the town of Williamstown for being Hino’s home for the past ten years, noting that all the Williamstown employees were transferred to Mineral Wells.

“This plant will serve as the manufacturing foundation and define the excellence of Hino Trucks in the United States,” he said. “I’m proud, knowing that from New York to Dallas to Los Angeles, the DNA if Hino Trucks will shine with the passion, dedication and craftmanship of West Virginians.

“But I believe the greatest accomplishment for us may not be this new plant or the new trucks produced here, but that we managed to keep all of our team members. We could not have asked for a better outcome. You are our greatest asset. It is what you do every day that truly defines Hino.”

Prior to the official grand opening celebration, Hino executives and visiting dignitaries took part in the traditional Japanese tree planting ceremony, and later shared the Kagami-Wari ceremony to consummate Hino’s growth commitment to the U.S.

In addition to producing Hino’s current line up of conventional trucks, the Mineral Wells assembly plant will produce a new line of Class 7 and 8 trucks, the XL series, powered by Hino’s A09, 9-liter engine.