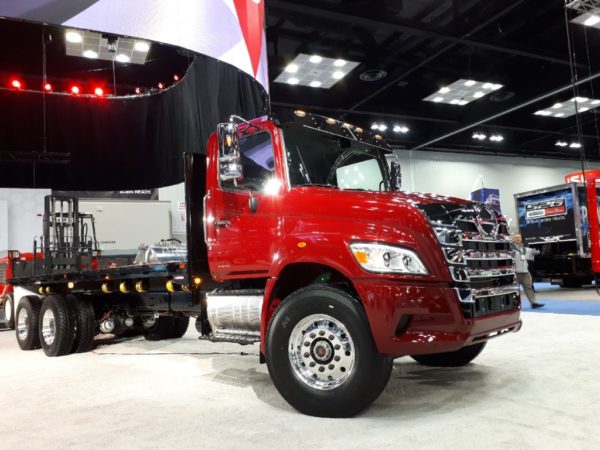 INDIANAPOLIS, Ind. – After 10 years of requests from dealers and customers for heavier trucks and tandem axles, Hino Trucks has answered the call. Its all-new XL Series line of class 7 and 8 vehicles was introduced at the Work Truck Show here in Indianapolis.

Orders on the new trucks will be taken in the fourth quarter of this year in the U.S., with production of the XL7 starting in the first quarter of 2019, the second quarter for the XL8. All models will be built in the company’s new plant in Mineral Wells, West Virginia. That facility and development of the new trucks has a price tag of US$350 million. That includes the hiring of “dozens and dozens” of engineers, according to Hino Trucks North America president and CEO Yoshinori Noguchi. He said the time was right for the company to enter the class 8 market in North America.

“Considering our remarkable success in class 4-7 in North America and our growing global presence in the class 8 market, entering the North American heavy-duty segment makes for the next logical step,” said Noguchi.

Note that only the XL8 tandem straight truck will be offered in Canada, not the  XL7 4×2 tractor. Timing of the Canadian launch at this point is unclear, though the truck will be on display at Hino’s booth at our Truck World show running April 19-21 at the International Centre near Toronto’s Pearson Airport.

Yasuhiko Ichihashi, chairman of Hino Motors, said during the unveiling that both models were extensively tested in both Canada and the U.S. They also represent more than 500,000 engineering hours.

Hino’s XL Series trucks will be available in a variety of straight truck and tractor configurations, including GVWRs of 33,000 to 60,000 lb, and a GCWR up to 66,000 lb. Wheelbase selections will run up to 304 inches.

The engine will be mated to the Allison 3000RDS transmission as standard equipment, with two other Allisons and two Eaton gearboxes as options. One of the latter is the Eaton RTLO-16913A. Hendrickson suspensions are used exclusively, including Comfort Air, along with Dana axles (rear-end ratios on the XL8 from 3.07 to 5.57) and Bendix brakes, rear discs being optional on the straight truck. Optional on all straight trucks are Wabco stability control, collision mitigation, and lane-departure warning systems.