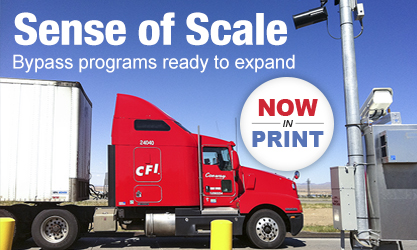 Time is money when stuck in the lineups for roadside inspection facilities. Drivewyze, the Canadian maker of an app used to bypass these ever-dreaded “coops”, has clocked a typical delay at three minutes and 37 seconds per truck – or about $12 per visit when considering fuel, labor and downtime. Those who are actually pulled in for an inspection can expect higher costs than that.

The very existence of the app proves that back roads are not the only way to avoid such delays. Pre-clearance programs including British Columbia’s Weigh2GoBC and Alberta’s Partners in Compliance (PIC) offer tools that allow inspectors to identify and wave through equipment that belongs to companies with strong safety records. Enforcement teams can then focus on companies that are more likely to run afoul of Commercial Vehicle Safety Alliance standards.

Now other provinces are looking to establish programs of their own.

The Manitoba Trucking Association established a working group to study such programs after being approached last year by Manitoba Infrastructure, and the Ontario Ministry of Transportation recently issued a Request for Information from potential system vendors.

“Enforcement attention should be focused where it’s most required,” says Geoff Wood, the Ontario Trucking Association’s vice president – operations and safety. “And we think there’s an opportunity to capture a lot more than they’re capturing.” Ontario carrier profiles known as Commercial Vehicle Operator Records (CVORs), for example, don’t account for trucks that are waved through with a clean bill of health. Ontario tracks 120,000 inspections per year, he says. “We know the interactions are significantly higher than that.” It’s more like 2-5 million trucks in that timeframe.

Capturing these numbers could make a difference on several fronts. Out-of-Service rates, which the general public sees as a barometer for overall industry safety, would drop significantly – down to as low as .026% from today’s 20%, according to the OTA. Inspection profiles and overall violation rates in CVORs could shift by as much as 5%, helping to avoid sanctions.

The current inspection model just doesn’t leave enough time to generate such reports, with each taking 15-20 minutes to complete.

“It is unreasonable to expect drivers and carriers to support a protocol that would have their trucks sitting for this amount of time simply to generate a piece of paper,” the OTA says. “Similarly, it is not reasonable for industry to expect screen/triage inspections to stop – they work. There simply needs to be a recording of the event -[electronic in long term, manual pilot in short term] and some credit given to carriers when this occurs.”

The question is what form the new bypass programs would take. Canada’s existing approaches vary in several ways.

Weigh2GoBC allows any carrier to join, uses transponders to identify participating vehicles, and relies on individual carrier profiles to determine the share of trucks allowed to pass. Once a truck checks in with a participating inspection station, it is green-lit for the next 24 hours, with the exception of some random checks.

PIC limits membership to those with the strongest safety ratings, and now uses the Drivewyze app to identify trucks that participate. Each carrier must have completed a National Safety Code audit within two years, and pass benchmarks for internal monitoring, Hours of Service, loss claims and Out-of-Service rates. Entry interviews are performed as well.

Terry Shaw, executive director of the Manitoba Trucking Association, is stressing the need to review each model, as well as similar programs in the U.S. “We don’t need to reinvent the wheel,” he says. But there are certainly some items high on his wish list, including provincial programs that might be able to work together, and memberships that would be open to anyone with an appropriate safety rating.

Of course, some fleets clearly have more to gain than others.

A truck driving from Vancouver to Calgary, for example, would in each direction pass inspection stations at Hope, Kamloops and Golden, British Columbia. Looking at the lost fuel alone, these vehicles waste about 0.41 to 0.733 liters of fuel per stop as they decelerate into a station, idle away, and then accelerate back to highway speed, according to Weigh2GoBC. Average that out to 0.5715 liters and diesel at $1 per liter, a 20-truck fleet saves $7,132 per year.

Carriers that choose not to participate may simply not pass that many scales in the course of a day. This might explain why just 600,000 of the 4.5 million registered trucks in the U.S. belong to one bypass program or another. Partners in Compliance recognizes more than 14,000 units but just 75 carriers; Weigh2GoBC represents 6,200 vehicles but 380 carriers.

In 2012, Quebec actually abandoned a preclearance program at St-Bernard de Lacolle because of limited enrolment, a spokesman with the province’s Transport Ministry confirms. Even Partners in Compliance faced the threat of funding cuts last year, before the support was renewed following -lobbying by the Alberta Motor Transport Association. The benefits of that program aren’t even limited to pre-clearance.

“I don’t think the scale bypass -program has grown to the extent that all of us would have expected,” adds Louise Yako, president of the British Columbia Trucking Association. “You see the capacity for interoperability in the U.S., but there seems to be less of
an -opportunity here in Canada.”

Pam McDermid, Weigh2GoBC’s Commercial Vehicle Safety and Enforcement manager – ITS initiatives, hopes the renewed interest from other jurisdictions will convince the Canadian Council of Motor Transport Administrators to create a common database of safety records like the Safety and Fitness Electronic Records (SAFER) system in the U.S. With that, and some common approaches, programs could reach beyond provincial boundaries, she says.

The border-related barriers include differences in hardware as much as philosophy and common records. Partners in Compliance was shifting to the Drivewyze app as this edition went to press, so Alberta won’t require infrastructure like overhead gantries to read transponders. But Alberta carriers that participate in Weigh2GoBC will need to hold onto their old transponders to support that program.

McDermid is clearly a fan of sticking with government-owned hardware. “There are no fees for our program. The data is ours. The programs are ours. We control it all,” she says.

Still, there is no small irony in the fact that Drivewyze is only this month rolling out as the technology choice in Alberta. The business was founded in the province, and already has a presence in 38 states. Another half dozen states are expected to come online in the first half of this year. Most participating fleets were simply switching on the capabilities available through platforms from the likes of Omnitracs, Peoplenet, Rand McNally and Zonar.

One clear advantage of an app-based system is how quickly it can be rolled out, insists Drivewyze spokesman Doug Johnson. No special poles need to be installed, and the systems can also be used by mobile inspection teams. “The time that it takes to roll out from state to state took the other program a decade,” he said, referring to the transponder-based Pre-Pass.

“It becomes far more expandable,” agrees Kim Hrushenski, director of Partners in Compliance. “We’ve tripled in size since I started in 2010, and I don’t see an early end to that.”