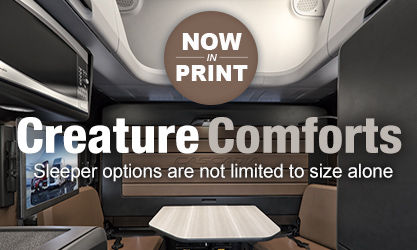 The choice of one sleeper over the next inevitably comes down to a tape measure, and for good reason. This is clearly a spec’ing choice where size matters. Regional bulk haulers, looking for every possible way to shed weight, might opt for a 40- or 52-inch area behind the seats if drivers spend only a night or two on the road. But that would be downright claustrophobic for team drivers who live long-hauling lives.

As important as size is, the various options inside determine exactly how comfortable and productive the spaces will be.

“Something as small and simple as a heated seat can make a real difference between a good and bad day on the road — and holding or losing a good employee,” says Claude Ricciardi, director of purchasing at Transervice, a leasing and dedicated contract fleet. And idling a truck won’t be much of an option if drivers head through jurisdictions which restrict idling time, or park in the individual neighborhoods which establish noise bylaws.

“Take the time to understand your driver needs and what they go through on a day to day basis. It will make a difference for them and for you in the long run,” he says.

Consider some of these factors when outfitting a sleeper.

For team drivers, an upper bunk can offer a sense of personal space, but the option often doubles as an unofficial shelf to support duffel bags and storage totes. The same nets used to restrain sleeping drivers can even be used to hold everything in place.

“Most customers, whether they’re team driving or not, will spec’ an upper bunk because it has better resale value,” adds Mike McHorse, Freightliner’s manager – on-highway product marketing. Of course, purpose-made shelves are still available for those who want to maximize the storage. Freightliner’s new Cascadia can come equipped with an upper shelf that has a lip and D-rings to secure any cargo.

No home away from home is complete without the appliances to cook dinner.

“The fridge can be very important to drivers who are concerned on eating right,” says Ricciardi. “It’s also a saver in food expenses. Eating out all the time can be both unhealthy and expensive.”

When spec’d from the Original Equipment Manufacturer, the all-important ice box comes with a streamlined look and well-sealed wiring. But a case can be made for purchasing -fridges and microwaves in the aftermarket, and looking instead for -purpose-made shelves and cubby holes to hold them in place.

Many fleets give drivers a provision to buy their own -appliances, observes Stu Russoli, Mack’s highway product manager. Those can also be easily moved when a driver changes trucks. Fleets aren’t responsible for any related damage, either.

Just keep in mind that the cubby holes and shelves may limit some options. A space that’s too tight might only support smaller 750-watt microwaves, McHorse says. He also stresses the value of storage space that’s big enough for something like a crock pot or rice cooker, or flat surfaces that are big enough to set up a -portable induction element.

The power for everything from fridges to entertainment systems can come from inverters that draw on batteries, diesel-fired Auxiliary Power Units, or connections to shore power. Even a combination of them.

The size of inverter needed to transform Direct Current into Alternating Current is largely dictated by exactly what will be powered. While a 1,000-watt model will be up to the job if someone is powering no more than a CPAP machine and flat-screen TV, appliances like microwaves crave more than that. Add up the wattage of each device to be supported, and include a 20% safety margin, advises Michael Klasen, a product manager with Eaton’s controls and power conversion division, adding that an 1,800-watt inverter offers the same power as a typical household outlet.

Granted, some fleets opt for smaller models as a way to keep drivers from over-stressing batteries, asking drivers to idle a truck when running something like a microwave. This can limit battery replacements or frequent Preventive Maintenance needs.

But the wattage is only part of the equation, Klasen stresses. The quality of power makes a difference, too. A modified sine wave inverter offers the broad frequency of energy that will be important when powering something like a microwave. A square wave inverter can cause microwaves to overheat, or cause fridge compressors to misstart, he says. Either situation will shorten appliance life. “The devices that you’re powering, they just want 60-hertz power. They don’t want 120 or 180,” he says, referring to the square waves as a “dirty form of energy.”

McHorse suggests the challenge can be addressed with a 1,500-watt inverter that has a “burst mode” capable of feeding up to 3,000 watts for three to five minutes. It’s not enough time to microwave a turkey, but who would want to eat a microwaved turkey?

And don’t forget that the inverter is part of a broader -system. Running wires through the floor without an appropriate -grommet will eventually create a rudimentary welding machine, Klasen warns. Any Direct Current supply wires also need to be robust enough to handle the current, while fuses to protect it all are best mounted right at the battery. 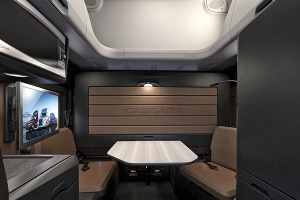 Sleepers can transform from one use to the next with the help of individual features that slide out or fold away. Consider the tables and seats that can be hidden under bunks when not in use. A top shelf that pulls out of a dresser becomes an instant work area.

About 80% of the buyers of Volvo’s 77-inch sleepers spec’ the company’s Workstation, says Wade Long, Volvo’s director of product marketing. In contrast, 35% order the same feature in 61-inch sleepers. And it can be further enhanced with a foldable upper bunk, so those who use it don’t have to sit in a cave-like space.

“It really comes down to how the truck is being operated,” Long says, referring to who will find the greatest value in options that fold and collapse.

5. A place for everything

In a well-designed sleeper, there is a space for everything and everything in its place. Items that need to be close at hand are easiest to access if they hang on hooks or sit behind the nets that enclose a shelf or cubby hole. Larger supplies can be stowed in areas under the lower bunk or behind cabinet doors. 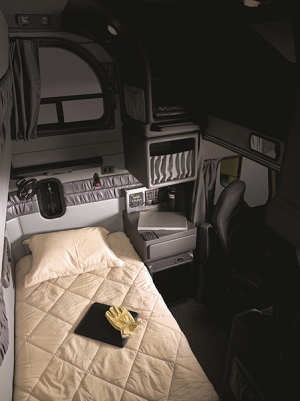 Sleeper sizes even seem to make a -difference in how the storage spaces are configured. Larger spaces are more likely to be equipped with cabinets that have doors, while smaller sleepers tend to be purchased with a wider mixture of doors and nets, Long says. The more the space is used as a home away from home, the more people want the space to look like one.

Jorge Medina, Peterbilt’s director of marketing, refers to a floor-level roll-out drawer as an example. Storage space like that, he says, is both functional and discreet.

Where hinges and latches do exist, Russoli suggests taking a look at how sturdy they feel. Anything will wear over time, but “the more robust right off the bat, the better.”

Remember that the size of every opening will play a role in how easily supplies can be loaded and unloaded, too. Kenworth, for example, refers to how its lower bunk lifts a full 90 degrees to expose storage underneath. Access is further enhanced through a combination of outer doors and hatches.

6. Go to the mattresses

When off-duty hours need to be logged, few features will play a bigger role in driver comfort than a mattress, and the choices of size and quality vary widely. Medina, for example, refers to the Model 579’s 82-inch mattress as just how big they can be. 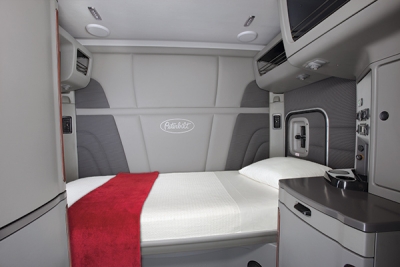 Beneath the surface, the support can come from anything from memory foam to coiled springs or premium pocket springs. Models that are expected to fold out of the way are typically thin, so it might make sense to carry an extra sleeping pad to pile on top.

Russoli also stresses the need to examine the platform any mattress sits on, as well as related supports. “If your mattress is great, but it starts to sag underneath, it doesn’t help you.”

If looking to trim costs, one option could be to spec’ a thinner and simpler mattress for upper bunks that might never be used, McHorse says. “You probably wouldn’t want to put a real high premium mattress in that.”

Skylights and windows welcome natural light, but well-placed windows can do more than that. Those who drive smaller sleepers in tight locations may benefit from windows at the back, Kenworth notes. It combines the visibility of a day cab with the comfort of a sleeper.

Just keep in mind that the extra windows which offer natural lighting could also transform a sleeper into a greenhouse.

A curtain between the bunk and the driving environment will help, but it can be claustrophobic, Long says. “It’s like stepping in the bathroom and shutting the door.” Instead, he leans toward a curtain that closes off the windshield, offering a sense of privacy while maximizing the sense of space.

Available coverings can vary in quality, too. The one that drops in front of a bunk, for example, might have a higher insulating value than the windshield model. “How hard is it to put the covers back on or close the curtains,” Russoli asks. “And does it really black out the light?” That will make a difference when parked under the lamps at a truck stop.

8. For the control enthusiasts 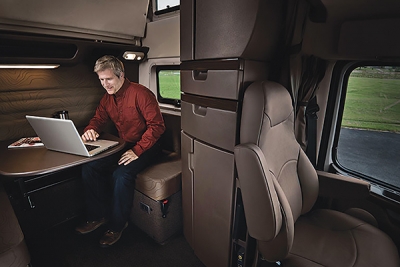 Optional control panels put the power of everything from HVAC systems to individual lights, entertainment systems and more at a driver’s fingertips. They are also available with working features of their own, such as integrated clocks, alarms and panic buttons.

No matter how comfortable a sleeper may be, the experience will be improved if the space can be easily accessed. That’s where well-placed grab handles, step designs, and seat openings will make a difference. International, for example, refers to the way its driver’s seat pivots toward the sleeper when it is time to head into the back; Medina focuses on the way Peterbilt’s Model 579 passenger seat swivels, and how the -driver’s seat has foldaway armrests. The spaces available between seats and around the dash will all make a difference.

Back in the sleeper itself, Freightliner offers a telescopic ladder for the top bunk in its redesigned Cascadia. “We joked about it being a jungle gym and needing to work with Cirque de Soleil to get up there,” McHorse says of bunks without the ladder.

Available openings can also serve dual purposes. That 2×3 hatch used to load gear into a sleeper? It can be propped open to allow a comfortable breeze to flow through.

Sleeper walls and doors require attention of their own.

“The most important thing is to spec’ a premium insulation package,” McHorse says, referring to the one Freightliner has developed using 3M’s Thinsulate material. The added layer is about more than controlling temperatures, too. It can help muffle the sounds of something like nearby diesel-fired Auxiliary Power Units.

“Enhanced lighting packages with skylights can transform the feel of a space,” Ricciardi adds. Depending on the sleeper, those can include individual task lights, brighter footwells, or snake lights that can be moved about.