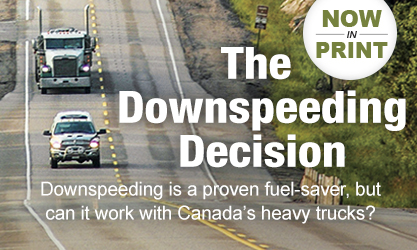 Spec’ing powertrains for Canadian operations is a tricky job. Americans take their powertrain spec’s pretty seriously as well, but how tough is it to get something that will move 80,000-pound loads on interstate highways? To be fair, our southern neighbors are always pushing the proverbial envelope, but tricky takes on a whole new meaning when it comes to downspeeding.

Downspeeding is optimized for trucks that log a large percentage of their miles in top gear. With Canadian weights, that’s not always easy.

“As long as the truck can stay in top gear, the ‘not-necessarily-interstate’ highways will work fine,” says Scott Barraclough, Mack’s technology product manager. “We have several fleets that spend a lot of time on two-lane highways, but they still have a very high percentage of time in top gear, which make them good candidates to benefit from downspeeding.”

Downspeeding is the practice of using faster or taller (numerically smaller) rear axle ratios to reduce the engine revolutions per minute while cruising at highway speed. Those who follow developments south of the border will have heard about rear axle ratios as low as 2.26:1 providing engine speeds of 1,100 rpm or less at 105 kilometers per hour. That wouldn’t be practical with a six-axle combination, even when running the Windsor-to-Quebec City corridor that is Canada’s closest answer to a flat and interstate-like drive.

But downspeeding doesn’t need to be limited to sub-1,000-rpm engine operating ranges.

“Dropping from a 4.33 rear end to a 3.90 is downspeeding, too,” notes Steve Slesinski, Dana’s director of product planning for the commercial vehicle market. “If the engine can provide the required torque and horsepower for the application at the appropriate road speed, Canadian linehaul fleets can still benefit from downspeeding.”

Downspeeding works today because recent-vintage engines produce plenty of torque at very low rpms. Most engine torque curves are flat from about 1,000 to 1,400 rpm. With a cruise speed of 1,100 or 1,200 there are still a few rpms to drop through before the torque output drops off and the transmission downshifts. With Canada’s heavier loads, we also need higher horsepower to keep the truck moving at highway speed. Again, a glance at a typical engine power curve chart shows horsepower is limited at the lower rpms, but abundant above 1,400 or 1,500 rpm — depending on engine make, model and ratings.

With that in mind, the entire relationship between peak torque points and adequate horsepower has to shift a little higher up the chart. So Slesinski’s suggestion of switching from a 4.33 to a 3.90 gear set is appropriate and a good Canadian adaption of the downspeeding concept.

“In general we see the industry moving towards downspeeding, heavy haul at a lesser extent than longhaul, but still moving in that direction,” says Allison Athey, Volvo Trucks product marketing manager – transmissions. “We’re seeing a general shift toward greater deployment of downspeeding across the industry, particularly in longhaul operations. While downspeeding is currently less common in heavy haul, we are seeing a shift.”

Athey says there is no particular limits on what can be done to downspeed the powertrain. It depends heavily on the application.

And the transmission has a role to play here as well.

“A maximum Gross Vehicle Weight (GVW) or Gross Combination Weight (GCW) for downspeeding a driveline all depends on the driveline components, the application, the route, and the average weight of the load,” she says. “The Volvo I-Shift with crawler gears Automated Manual Transmission enables downspeeding for higher GVW’s or GCW’s, and provides the ability to tailor application-specific downspeeding solutions.”

“In this case, at top speed the fuel efficiency savings is up to 3% based on the general rule that every 100 rpm reduction in engine rpms provides a 1.5% improvement in fuel efficiency,” she adds.

With the taller rear axle ratio, a really low first gear is needed in the transmission, and probably a direct drive model rather than an overdrive. Alex Stucky, global product strategy manager of Eaton’s commercial vehicle transmissions, says his 13- and 16-speed UltraShift Plus automated transmission variants are popular in Canada because they offer greater GCW flexibility (up to 140,000 pounds) and duty cycle variation.

Of course, this all depends on the rear axle and driveshaft ratings. Slesinski says his AdvanTek 40 tandem drive axle is approved for 110,000-pound Gross Combination Weights with a ratio as low as 2.26. Meritor offers its 14X drive axles in ratings of 145,000 pounds for applications with 3% grades, or 125,000 pounds on 8% grades.

The technology is there now for Canadians to cash in on the advantages of downspeeding. Granted, it won’t work everywhere in the country, but where terrain permits it’s probably worth a look.

We are so accustomed to viewing fuel efficiency in terms of consumed liters that we often overlook ton-mile efficiency — sometimes called freight efficiency. Canada’s trucks with high gross vehicle weights burn more fuel than a typical American truck. When you look at two numbers, 7.5 miles per gallon (31 liters per 100 kilometers) for an American five-axle combination versus 6.0 mpg (39 L/100 km) for a Canadian six-axle vehicle, you can’t help think we aren’t doing so well.

But when looking at the fuel burned to move a certain weight over a distance, Canadians are significantly more efficient than our lightweight southern colleagues.

It would take five US trucks to deliver what we can deliver with four, and we’d burn about 25 fewer US gallons (95 liters) of fuel overall. Our Greenhouse Gas emissions would be correspondingly lower as well.

The figures look even better when comparing an eight-axle Super-B train to the lowly 40-ton five-axle trucks used south of the border. Ton-mile efficiency is way up, even with the marginal increase in fuel consumption.

While there’s no denying the efficiency of our uniquely Canadian truck configurations, they aren’t popular with some drivers and owner-operators. From their perspective, efficiency might be just great, but their rates have to reflect the increased capital cost of a suitable power unit as well as the increases in fuel and maintenance costs.

Downspeeding the drivetrain is possible, even with these heavier loads. That improves both fuel efficiency and freight efficiency, as long as it’s done correctly.