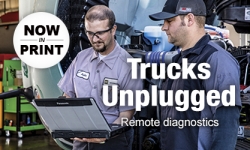 One of Central Oregon Truck’s T680s had already crossed into Canada this March when the news arrived: Something seemed wrong with the fuel pressure. Sensor-generated warnings are never exactly welcome news, but Pape Kenworth was able to confirm the fuel system was already due for some scheduled maintenance. It looked like the driver could complete the southern leg of the trip to Denver.

The engine had other ideas. The electronic warnings began to increase. Everyone decided it was best to schedule the work before the trip was done.

Troubleshooting trees have been firmly rooted in fault codes for years. The data that shines a Malfunction Indicator Light (MIL) or triggers another type of warning can steer technicians to look at specific components or complete specific repairs. But manufacturers are rolling out increasingly sophisticated diagnostic platforms that make it possible to tap into sensor data without plugging in a scan tool.

Fault codes are now being fed to fleet managers, dealerships, and call centers alike. Forget about the lamp on a dash. The data from late-model engines is feeding reports through text messages, emails, or web portals. Drivers don’t need to call dispatchers to report warning lamps; fleet managers learn about issues at the same time, in some cases with a call from a central call center or dealership team that monitors the details. Central Oregon Truck managers received word about the fuel pressure issue by email, generated through Kenworth’s TruckTech+ system. Personnel at the dealership offered a watchful eye.

“Any fault code that’s generated, we can get information back to the operator in less than 10 seconds,” says Lori Cobb, Cummins’ vice president – connected solutions, referring to her company’s Connected Diagnostics system. If the problem relates to a missed regen cycle, the warnings can even come with a “de-rate timer” that tells fleet managers how long the truck can continue before the engine power is dialed back.

It’s not the only emerging issue that can be identified through remote diagnostics. Andrew Dondlinger, Navistar’s vice president – connected solutions, refers to a coolant leak as an example. Drivers have been known to top up reservoirs when warnings are triggered on the dash. The problem is that can leave maintenance teams blind to the underlying problem. Techs might not check hoses or clamps when the equipment rolls into the service bay for other issues, or not think about warning drivers to stop the practice that can introduce unwanted air into the system.

Not all fault codes and warning indicators require a truck to be parked. But fleets still need to know about the issues that are emerging before they can make informed business decisions. The Kenworth system, for example, divides codes into four categories, from information and service soon, to service now or stop the truck.

“I wouldn’t say there were codes that were necessarily being ignored [before remote diagnostics came along]. It’s more about having the fleet understand the severity of the fault,” says Greg Treinen, sales and marketing manager – connectivity with Daimler Trucks North America, referring to the value of the systems. All too often, drivers were heading to shops whenever they saw a check engine light, only to find a repair could have waited. “It’s kind of giving them that information or that insight into helping them make that -initial -decision whether to take the truck in right away or they can keep going,” he says.

Fleets aren’t the only ones that have something to gain. Real-time data streams also help manufacturers to detect warranty issues earlier than ever. “In the past, in order to hear about those issues, you’d have to wait until you had a dealer call or customer call,” Dondlinger says. It can also take two or three months for warranty paperwork to make its way through every channel. “Now we’re able to see that [issue] within minutes, hours and days.”

Remote diagnostics is about more than a stream of sensor data. It’s about finding ways to transform it into useful information, and often involves live personnel monitoring the information before it actually reaches truck owners. Data from Mack’s GuardDog system, for example, is monitored by OneCall agents who will help decide if a code is an immediate threat or can be addressed later. “We put them in a position to make a better business decision,” says David Pardue, vice president – connected vehicle and uptime services.

The systems are also becoming increasingly refined. Mack’s first GuardDog Connect system tracked about 50 fault codes, he says. “We’ve more than tripled the number of codes and quadrupled the number of parameters.” Through a partnership with GeoTab it has even been able to extend the support back to EPA10 engines.

Still, as valuable as the data can be, it’s possible to have too much of a good thing. Email boxes can be jammed by information about so-called faults that include the “ghost codes” which simply resolve themselves. Suppliers are taking different approaches to solving that, using everything from filters to limit the types of reports that are generated, to having a live body interpret the data before calling in the news.

“Sometimes you don’t have enough data, or sometimes it’s too much data. You’ve got to add the knowledge piece to it. Data is good, but information is what matters,” says Conal Deedy, Volvo Trucks North America’s director – connected vehicle services. “When you take and understand a fault code plus some other information, we have a very high degree of certainty that this is exactly what needs to be done, and here’s what parts need to be used to fix it, here’s the type of mechanic you might need.”

“Many of them aren’t a severe-type code,” Dondlinger explains, describing the readings that can emerge. “Ghost codes come and go, and they shouldn’t be there at all.” Even when the filters are in place, he says most fleets limit themselves to reviewing the data about twice a day, just to confirm the equipment that will be available for dispatching.

“The combination of both email and the portal seems to work best, allowing fleet managers to quickly triage issues with the email before deciding if they want to dive deeper and look for more information,” says Kurt Swihart, Kenworth marketing director.

Cobb finds that larger fleets are more likely to prefer emails that are sent through to a central maintenance group rather than drivers. “They know what route that driver is on; the sensitivity of the load,” she says. Smaller fleets can actually be the ones most willing to embrace more of the electronic feedback, because they have a chance to absorb all the information.

The ultimate goal is to generate warnings that predict different issues before any warning lights or outright failures. And it is possible. Cummins engines in mining equipment, for example, draws on things like temperature readings to determine trouble spots to come.

“The on-highway space, we’ll get there, but you have to collect the healthy heartbeat data,” Cobb says. Put another way, engineers need an exact idea of how a healthy engine performs before they can create algorithms that raise the alarm as problems begin to develop. This will help to protect against “false positives” that suggest problems are on the way when everything is fine. Think of it as knowing the difference between heartburn and the warning signs of a heart attack.

“When we have the ability through seeing how that vehicle is being used, and how it is performing, we can be much more proactive in the whole maintenance and repair process to make it really efficient,” Deedy agrees.

The secret is in the combination of codes. Maybe it’s a specific coolant and turbocharger temperature that suggests a failing turbocharger. But Dondlinger says Navistar wants to be at least 85% confident in such readings before calling equipment into a shop. Otherwise, there’s the danger of swapping out something like an injector that still has plenty of life in it. “There’s a lot of data and a lot of time to analyze before you get to that certainty level,” he says.

Then there’s the matter of pulling together information from other sources, such as the location of nearby dealers that have the parts needed for a related repair.

As remote diagnostic systems are integrated into dealerships, there is the promise of checking to see if parts are available, and ensuring bays and techs are ready for the work. But there are challenges even when everyone is on an electronic system. Navistar inventory reports, for example, are only generated once per day. Maybe the turbo on the shelf was used hours before, on another repair. Determining in real time whether technicians or service bays are available is another issue.

Take it a step further, and it’s conceivable that data about the truck could be cross-referenced to an Electronic Logging Device to schedule repairs during resets or breaks, Dondlinger muses.

Daimler is exploring how the data might be used to customize maintenance schedules or service intervals, Treinen says. A focus on the engine or aftertreatment system could determine the best time for an oil or filter change. Think of it as proactive maintenance rather than predictive maintenance.

“We’re looking at what we can do with that data,” he says. “There’s a whole list of things.”

– The original version of this article has been edited to properly spell the name of David Pardue, Mack’s vice president – connected vehicle and uptime services. Today’s Trucking regrets the error.