KITCHENER, ON — Dave Taylor is a model employee by many measures. He has worked at Ontario-based Erb Transport for five years. He and his wife Fiona bought a home in Kitchener, commuting distance from the fleet yard, and their daughter Allanah attends Grade 10 at a local high school. “Dave comes in and does what he’s asked,” says Randy Steckly, corporate driver training manager.

Now the experienced long-haul driver is being told to go home. To England. 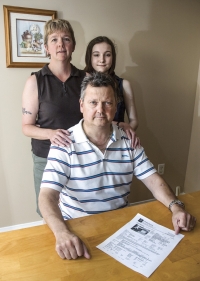 Taylor’s work visa has expired; the family home put up for sale. He applied late in 2014 to renew the visa, sending documents back and forth to lawyers, but there is little hope. The family earns a limited number of “points” under Canada’s immigration system – largely because the federal government has decided that driving a truck is a low-skilled job.

This is Taylor’s second trip through Canada’s employment and immigration channels. He first worked for Erb under the Temporary Foreign Worker program, designed to address short-term labor shortages when no Canadians can be found to fill a job. After two years at the fleet, he had to return to England in 2009.

When his wife was accepted to Ontario’s Conestoga College for training as an Early Childhood Educator, he was able to return under a temporary work visa, and Erb welcomed him back with open arms. “He was a good worker before,” Steckly notes. Not only that, this visa was good until 2016. It would be five years until the expiry date came about. The paperwork was added to the driver file, and Taylor hit the road.

Steckly admits that he didn’t give the issue another thought until Taylor broke the news that his visa wasn’t being renewed. Employing him as a Temporary Foreign Worker isn’t an option any more, either. Erb has largely abandoned the related program since it can now meet labor needs with local candidates and entry-level trainees. “It’s a lot of work, a lot of time, a lot of money,” Steckly says.

Faced with criticism that the program was being abused, the federal government tightened Temporary Foreign Worker requirements in 2014. Labor Market Impact Assessments, formerly known as Labor Market Opinions, now make it harder to prove that jobs cannot be filled locally. Application fees soared to $1,000 per worker, up from $275. Applications were also grouped into high- or low-wage categories, and the difference was defined by the province’s median hourly wage. Employers using the program also have to show how they plan to permanently fill related jobs, and face tougher recordkeeping demands than ever before.

Besides, the program does little to address long-term needs, Steckly says. When the fleet used the program to hire a half dozen drivers, most headed home early. “For a family guy, it’s really unstable,” he says, referring to the way participating drivers are shipped back and forth to their home countries after limited time on the job.

Mick Sayer, founder of Kitchener’s Advanced Road Craft training school, knows how frustrating the process can be. After every nine-month period he drove for Erb between 2004 and 2008, he had to travel back to England for three months. And he says he couldn’t work in England during the waiting periods because his home country would then tax his Canadian wages as well. The Canadian taxes would have been refunded, but it would have been an administrative nightmare.

“I was single when I did it,” he says, referring to the constant upheaval. “If I was married, it wouldn’t be an option … I’d have looked at going somewhere else.”

Sayer also experienced the immigration scams which prey on those looking for opportunities in North America. He invested $15,000 into a program that promised a U.S. Green Card and training at a Florida driving school in 1997. But when he arrived at U.S. Customs, he was informed the program didn’t even exist. That’s when he realized the true reason why he had been asked to pay the money into a Bermuda bank account. Immigration officials allowed him to proceed to the school, and report back, but the money was lost forever.

The only reason he tried to come to North America again is because another recruiter approached him in 2002. After plenty of vetting, two years and several interviews later, he joined Erb Transport as an official Temporary Foreign Worker. “They said, ‘OK, you’ve got a fruit-picker’s visa,'” he recalls. “It was classed as ‘unskilled labor’.” That was a hard thought to swallow after spending 26 years as a commercial driver, in a country where the skills are learned through formal apprenticeships.

It was previous experience as a transport manager that ultimately recognized him as a skilled worker, opening the path to permanent residency.

Work visas are tough to secure for truck drivers because of the way the immigration system’s related points are earned. Driving ranks third in a list of four possible skill categories under a system known as the National Occupational Classification (NOC) Code. Other jobs listed in this same Level C include general office workers, home care providers, and material handlers. Higher rankings lead to more of the valuable points, which are also allotted for things like -formal education.

The ranking is currently being reviewed, but slowly. The federal government only updates its definition of 40,000 jobs every 10 years. The next updates are scheduled to come in 2021.

“We’re losing a good, qualified driver because it’s not recognized as a higher skill,” says Angela Splinter, CEO of Trucking HR Canada. “We know there’s probably a lot of other examples like [Taylor] out there.” It’s why the -organization, which focuses on HR issues in Canada’s trucking industry, is asking employers to rethink the way they advertise driving jobs. “Every time a recruiter says, ‘No education required’ or ‘No experience necessary’, it implies the job is easier than it actually is,” she says.

Those responsible for updating the codes will make their recommendations after reviewing such job descriptions, recruiting ads, and other available documents. They also call employers to find out what fleets require of job candidates. For its part, Trucking HR Canada is highlighting the training offered through licensing, mentoring, and on-the-job -programs alike. The hope is that, collectively, it will lead government officials to recognize driving at a higher skill level.

One thing that the trucking industry has in its favor is the number of people employed as drivers. It is one of the -largest occupational groups being reviewed, Splinter says.

“They know the occupation requires attention.”

The changes won’t come soon enough for the Taylors. They are packing their things. A social media campaign established by friend and coworker Alfy Meyer has generated shares and likes, and even a letter to the prime minister, but none of it has found a way to let the family stay.