TORONTO, Ont. – Joanne Mackenzie, a driver for Highland Transport, was crowned the 2016 Highway Star of the Year at Truck World today.

The award, that began in 2004, recognizes drivers across the country who: embody the term ‘professional’, give back to their communities, and operate in the highest and safest regard for other road users. Winners of the award are carefully selected after nominations are submitted.

Mackenzie has been a professional driver for more than 24 years, 14 of which have been for Highland Transport. She is the first female to be named Highway Star of the Year.

“I’m so humbled. It’s a very humbling experience and quite the honour to be alongside the previous Highway Star winners,” she told Truck News. “I’m really privileged to be able to be the first woman to win this. I hope now that we’ve got that one foot in the man’s club…more women will come forward and feel comfortable to participate in stuff like this. Especially when it comes to stuff not only behind the wheel but in the community. Women need to know they can do whatever they want.”

Mackenzie is well-known in the trucking industry for her work with Trucking For a Cure – a charity that raises money and awareness for breast cancer research through truck convoys and other trucking-related campaigns.

What touched Mackenzie the most about the award was having her two brothers at Truck World there to support her and watch her be celebrated among her peers in the industry.

“It’s the first time my family has come to an industry event with me,” she said. “And they’ve supported me back home, but they’ve never driven hours to come see me. I’m so excited my two brothers are here…My family misses me on the road and I miss so many family events and they’re all so supportive and understanding. It’s great to have that family support because I don’t have to worry about what’s happening at home.”

As the winner, Mackenzie walked away with more than $15,000 in cash and prizes, including a $10,000 cheque. Freightliner, Eberspacher, Chevron and OBAC sponsor the award.

“I’m so grateful and thankful,” she said. “I want to thank everyone at Truck World, and Newcom for everything they do for the industry. Having this recognition for the driver is wonderful, it bring us to the forefront, and letting drivers know they do get recognition.” 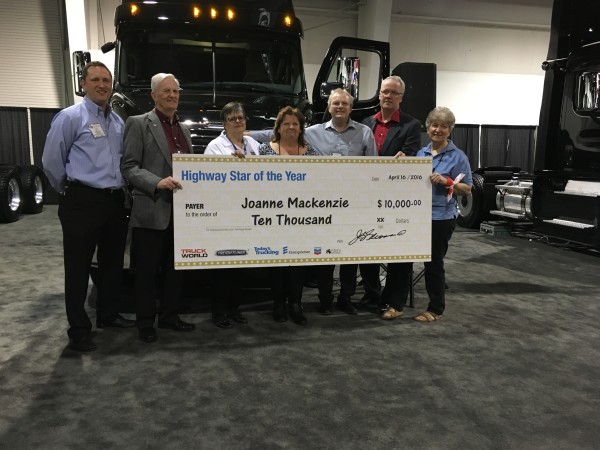