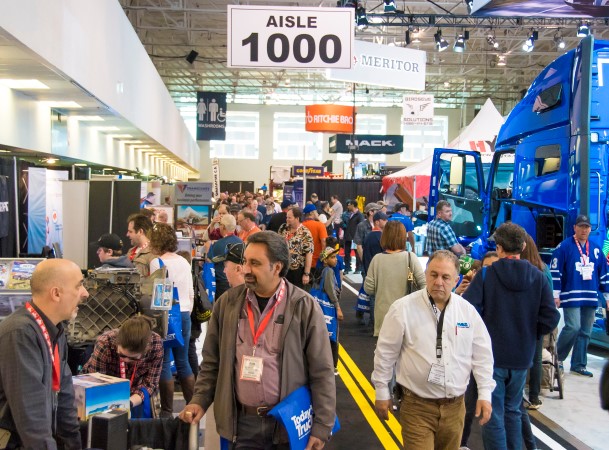 The 14,807 visitors interacted with 4,788 exhibitor representatives. And there was plenty to see in the sold-out venue that included 525 exhibits — requiring the addition of a fifth hall, and featuring 179,000 sq.-ft. of booth space across nearly 400,000 sq.ft. overall.

The event is jointly produced by Newcom Media (the publishers of Today’s Trucking) and Hannover Fairs, a division of DeutscheMesse.

“I couldn’t be happier with this year’s attendance,” said Joe Glionna, president of Newcom Media. “Starting Thursday with 450 industry professionals at the opening breakfast, having the Ontario Trucking Association’s board meeting on-site, and announcements of truck deals right on the show floor, I’m hearing a tremendous amount of positive comments from the exhibitors. I think the excitement on the show floor is indicative of the general mood across the industry right now.”

“On Friday and Saturday, the recruitment pavilion was a true success,” added show manager Thierry Quagliata. “Over 100 recruiting companies were spread out between Hall 4 and the general show floor, attracting more than 5,000 drivers looking for new career opportunities.”

Other highlights of the show included a VIP kickoff breakfast featuring David Carroll, the musician behind the social media sensation United Break Guitars. A new feature for the year included Knowledge Stops that included presentations by industry experts on topics such as trip inspections, the affect of marijuana in the workplace, and more. Platooning was a cornerstone topic for the Fleet Forum moderated by Today’s Trucking’s Rolf Lockwood.

Newcom Media also used the event as a backdrop to recognize the 2018 Highway Star of the Year, Doug McGowan of Westcan Bulk Transport. The award was sponsored by Freightliner, Eberspaecher, and the Owner-Operator’s Business Association of Canada (OBAC). A salute to women in the trucking industry was also held.

Truck World was endorsed by the Ontario Trucking Association (OTA) and the Canadian Trucking Alliance (CTA). Navistar was the event’s prominent sponsor and provided free Wi-Fi for the show, while Cummins sponsored the show’s mobile app.