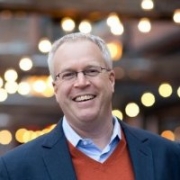 BANFF, AB — There is plenty of bad news to report. Alberta fleets can cite low oil prices and a lagging economy as just two examples. But Chris Cummins – a speaker who specializes in sales, leadership and personal development — told members of the Alberta Motor Transport Association that they have the power to change things.

It involves a positive attitude.

“Our thoughts become feelings. Our feelings become actions. Our actions become outcomes,” he said in a two-hour address during the association’s annual conference, focusing on the importance of a positive state of mind. “Oil’s going to do whatever oil is going to do.”

To prove how positive vibes can spread, he ran an experiment, leading the crowd in a polite “golf clap” and then a wild cheer. Everyone smiled. “Did it change the vibe in here?” he asked. “Sure it did … Can we just agree that it’s contagious?”

He quoted William James, one of the fathers of modern psychology, who said human beings can change external circumstances by changing their “attitudes of mind”. There was research by the author of Brandwashed who found that clicking “like” on a Facebook post returns warm, fuzzy feelings and endorphins.

Earl Nightingale, who recorded The Strangest Secret in the 1970s, found that you become what you think about all day long. Levels of the hormone cortisol soar and immune systems suffer if you feel stressed. The butterflies you feel before a speech? They are caused when your body redirects blood from the digestive system and brain into arms and legs, preparing to fight or run.

Put another way, Cummins said, we become “stupid” if stressed.

One of the paths to a positive state of mind involves reaching out to others, Cummins added. Be the only person at a networking event who is not talking about themselves, he challenged the group. It’s about the Law of Reciprocity, which says that, when we give value to a human being, that person will find a way to return value.

The way the information is conveyed is equally as important. Only 7% of effective communication involves words, while 38% involves tone and 55% involves body language, Cummins said, referencing widely cited research. The challenge is that emails, while effective at conveying data, fail to convey tone.

“Default to face-to-face whenever possible,” he said. “The most effective persuasion happens belly to belly.” The next option is to pick up the phone so someone can hear tone. Only if those options are not available should managers shift to email. “Do not persuade by email. It does not work. You will not rally troops, you will not win people over.”

One of the most positive ways to deliver feedback is to ask people things that went well, identify things that were “tricky”, and things that could be done differently next time, Cummins added. “That’s the pivot from the past to the future.” Only then is it time to offer feedback in the same order and manner. “Give value first … just help them to be better.”

And remember that sales prospects are sometimes just waiting for you to present an offer, he said. “Step outside of that comfort zone.”

“You’ve got to choose fear sometimes,” Cummins explained, asking the group of fleet managers to write down the things that scare them, current challenges, and lessons or insights they’ve picked up in the last two years. “If there was no way you could possibly fail, what would you try?”