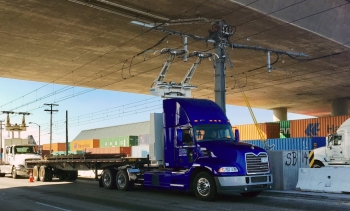 GREENSBORO, NC – Mack has added to the growing list of electrified truck prototypes, showcasing a plug-in hybrid electric driveline as part of a zero-emission eHighway demonstration in Carson, California.

The Pinnacle day cab drew power from Siemens-produced eHighway infrastructure, which came in the form of a mile of catenary systems — similar to those used to power trolleys or streetcars. Energy was transferred through a “current collector” from Siemens.

The demonstration near the ports of Los Angeles and Long Beach was in partnership with Siemens, sponsored by the South Coast Air Quality Management District.

“Mack continuously investigates alternative solutions to diesel, and the catenary system is just one of a number of projects in which we are currently involved,” said Jonathan Randall, Mack’s senior vice president – North American sales.

The manufacturer has explored several ways to reduce Greenhouse Gases, using everything from plug-in hybrid electric powertrains to alternative fuels such as dimethyl ether (DME).