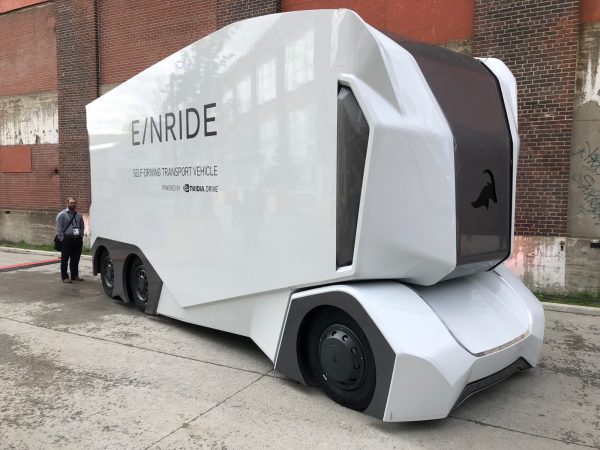 The T-Pod, an electric vehicle with no space for a driver, will roll out in two phases at the Michelin facility. The first work will be restricted to a confined, fenced area. With regulatory approval, the tests would expand to shipments along local roads.

Einride chief operations officer Niklas Reinedhal said during an announcement at the Movin’On Summit that the truck can travel 200 km on a full charge, and is designed to carry as many as 18 pallets and 16 metric tonnes of freight. While it can travel at speeds up to 80 km/h, it’s currently constrained to 15 km/h during tests in Sweden.

It’s built on the same vehicle platform as the T-Log, which was recently used to demonstrate autonomous shipments in logging applications.

While most movements are controlled through truck-based systems, some moves are steered using remote controls stationed as far as 120 km away, he said.

DB Schenker is currently testing the truck with shipments between a warehouse and terminal in Jonkoping, Sweden.