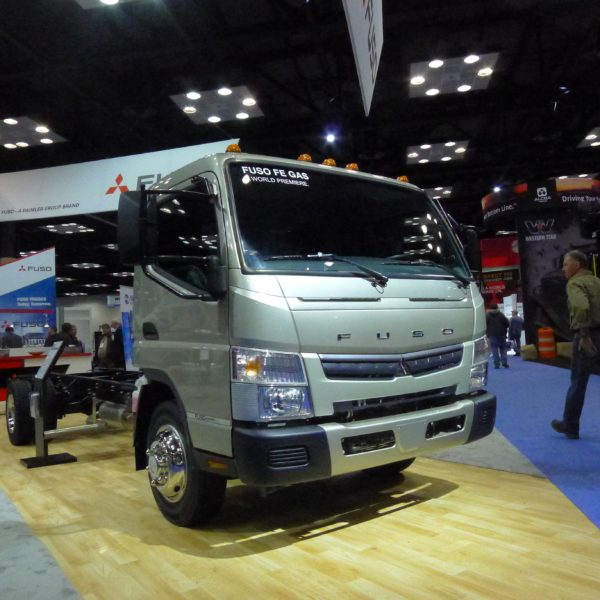 INDIANAPOLIS, Ind.– Allowing that diesel still owns something like 60% of the medium-duty market, Mitsubishi Fuso thinks that there’s a sizeable group of users who simply want the simplicity of gas engines. Just ‘turn it on and go’ is what they want, having no wish to fool with DEF tanks and the like.

To that end, the company used the Work Truck Show to introduce its gasoline-powered 2019 class 4 and 5 FE cabovers. The new trucks feature not only the General Motors 6-liter V8 engine and an Allison automatic transmission, but also a new cab interior designed to improve driver comfort and efficiency.

The Daimler AG business unit also showed a production-ready model of its battery-electric eCanter, built in the company’s plant in Portugal. It’s now available for sale in Japan and will be soon in the U.S. Canada remains a question mark. In the next few months 50 eCanters will be deployed in American fleets, including several at UPS.

The gas and electric trucks will be sold alongside diesel models, giving Fuso the broadest product offering in the category.

Fuso will eventually offer a gaseous-prep package from the factory to allow buyers to use compressed natural gas or propane autogas. The trucks come equipped with a 40-US-gallon rear-mounted gas tank.

The gasoline engine will be paired with an Allison 1000 automatic transmission with Fuel Sense 2.0 transmission management software, including adaptive shifting technology that improves fuel economy by as much as 6%. The software uses a Neutral-at-Stop feature that further reduces fuel consumption.

The FE gasoline trucks will also arrive with enhancements in the cab’s interior, including improved driver seat bolstering.

Fuso will assemble the gas models at the Freightliner Customer Chassis plant in Gaffney, S.C., a first.