LEEDS, ON – An Ontario truck driver was charged on Tuesday after members of Ontario Provincial Police’s (OPP) Highway Enforcement Team (HET) stopped a tractor-trailer near Mallorytown on the 401 after observing significant damage on the trailer. 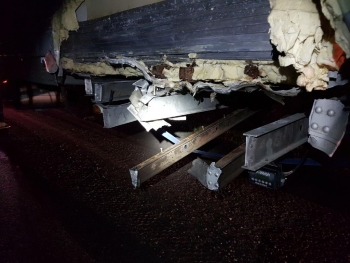 After investigating, OPP found that the driver had hit a loading dock in Montreal causing major structural damage to the trailer.

According to OPP, the structural integrity of the trailer was gone completely and the driver had used a nylon strap to tie up the broken cross members of the trailer. The driver’s intention was to haul the damaged trailer to Toronto where he would have it fixed.

The driver, a 23-year-old man from Windsor, was charged under the Highway Traffic Act for driving a commercial motor vehicle with a major defect. His plates were pulled and the trailer was removed from the highway.