September 18, 2014
Truck uses GPS to chart course then drives to its destination without input from the driver

DETROIT, Mich. – The steering wheel seemingly had a mind of its own. We watched from the co-pilot’s seat in a stubby little single-axle Peterbilt 579 day cab as its wheel spun furiously on its own, keeping the bobtailed rig precisely on a pre-plotted, GPS-guided course around a large parking area on Detroit’s Belle Isle during the ITS World Congress.

Processors in the tractor had been programmed with a series of GPS waypoints, like electronic breadcrumbs leading around the lot, which the 579 autonomously followed on its own with bloodhound accuracy. How accurate? On one such loop, after the tractor left its starting point, a full plastic water bottle was placed where its right front tire had started. 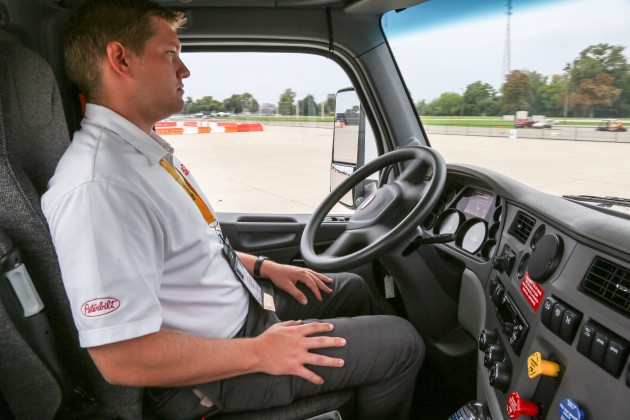 Look Ma, no hands – and no feet. Peterbilt’s autonomous-assist demonstrator repeatedly and accurately drove itself around a GPS-plotted course during the ITS World Conference.

After meandering around the tarmac acreage for a couple minutes following the GPS plot, the truck then returned itself to its starting waypoint with sufficient accuracy to squash said water bottle with that same right front tire. All the while, the 579 driver’s hands never left his knees and his feet never lifted off the cab floor (but he was still responsible for situational awareness and looking out for obstacles).

This 579 was an “autonomous-assist” technology demonstrator, which in this demo was showing how future Peterbilts might harness extremely accurate global positioning plots combined with other automation features to effectively maneuver themselves through unfamiliar distribution centers, cargo terminals, or port facilities. Or wherever. The system certainly isn’t ready for prime time just yet, but gives a clear picture of the sort of driver aids that technology might provide in the relatively near future.

“The autonomous truck of the future is an extension of existing, individual systems already available for today’s commercial vehicles,” said Bill Kahn, Peterbilt principal engineer and manager of advanced concepts. “The vehicle we demonstrated during the ITS World Congress showcases how these technologies can integrate to provide the next generation of advanced cruise control and automation features.”

Those existing technologies – from companies like Bendix and Meritor Wabco – include radar-based adaptive cruise control (ACC) as well as lane departure warning systems (LDWS) that use on-board cameras to detect lane edges and striping, and alert the driver when the truck strays outside of its lane.

In currently on-sale systems, it’s up to the driver to correct any course drift and bring the rig back within the desired lane. But Peterbilt’s concept 579 takes this one generation further by empowering the LDWS with the ability to self-correct, automatically keeping the truck within its lane via integration with the cab’s electronically controlled power steering system. This tractor’s ACC system also has the ability to use on-board cameras to bring the vehicle to a complete stop if necessary and then reaccelerate, thereby making life in heavy traffic a whole lot less stressful on the driver – especially if the rig is equipped with an automated manual transmission. 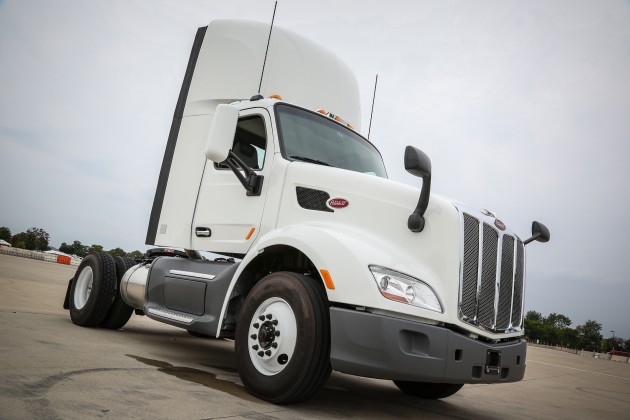 The demo tractor was an unassuming single-axle 579 day cab. That humble, steel-wheeled exterior obviously hid a lot of existing and down-the-road technology within.

“Heavy trucks are an ideal platform for automated operation,” said Kahn. “Compared to motorists, commercial vehicles travel a majority of their miles on modern highways, at constant speeds and for extended periods of time.”

Kahn stressed that such automation technologies are not intended as driver replacements, but rather to complement the truck operator. But what if such systems make life a bit too comfortable and effortless to the point where a driver might begin to lose concentration as his rig essentially drives itself down the highway?

When it comes to timing of this emerging technology, Kahn’s crystal ball sees the automated lane retention and enhanced cruise control systems emerging to market within a couple years. The GPS self-guidance systems, however, are longer-term proposals. While the technology exists to enable the GPS concept, we get the impression there’s still much work to be done to cost-effectively integrate that technology.