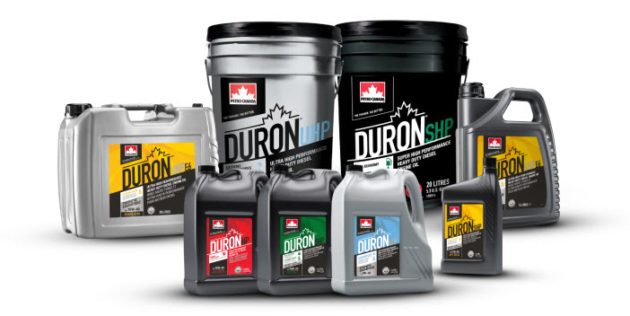 TORONTO, Ont. – Petro-Canada Lubricants is actively exploring the limits of heavy-duty engine oil, and early tests with a 0W20 prototype are just the beginning.

“We’ve got these oils in real-world trucks today,” said product specialist John Pettingill, during a media briefing at the Honda Indy in Toronto. “It’s super exciting because you don’t see this  … that’s passenger car language, but we’re talking heavy-duty here.

“We’re asking how low can we go with viscosity, and what’s the point of going lower?” he added.

It’s all about striking a balance between reducing friction in the name of fuel economy and creating a protective coating between metal surfaces. The CK-4 and FA-4 oils on the market today have High Temperature High Shear (HTHS) limits between 2.9 and 3.5 cP (centipoise) – a measure of viscosity. Petro-Canada engineers wonder where they can go from there.

It’s all part of a steady downward march in terms of viscosity. Most engine manufacturers began filling their sumps with 10W30 oils rather than 15W40 formulas because of benefits such as easier cold starts and improved cooling capabilities. In general, the fluids just flow better and still protect components.

“We have embraced the 30s, they’re definitely taking off,” Pettingill said.

The trucking industry certainly seems to have embraced the latest CK-4 oil category.

“It by far was the largest industry change in the last 10 years,” said Barnaby Ngai, category manager – heavy-duty engine and driveline oils, referring to the December 2016 rollout. “Overall we feel it’s been a very successful transition in the industry in general, and specifically to us.”

He says Petro-Canada Lubricants has maintained its market share despite competitors that continued to offer the previous generation of CJ-4 oil for an extended period of time, too. “CK-4 is just that much better than CJ-4 – fully back serviceable,” he said. “Why add another level of complexity?”

Still, buyers have been slower to embrace the corresponding FA-4 engine oil formulas, with market shares measured in single digits despite the promised fuel economy gains.

“It’s an adoption rate we’ve fully expected,” Ngai said, noting how some engine manufacturers have yet to make the transition.

But field tests continue to demonstrate how well the CK-4 and FA-4 formulas work in the meantime.

Petro-Canada Lubricants tests conducted in four Detroit Diesel engines operated by one fleet, for example, are showing promising results in terms of base numbers and acid numbers. And the base numbers are vital when it comes to addressing the acids that are created as fuel burns.

“When the base number is just about equal to the acid number that’s generally where you’ve used up your base reserve,” Pettingill explained.

Another fleet boasting gross vehicle weights closer to 140,000 pounds is seeing positive results with Navistar MaxxForce engines. Drain intervals there are stretching 10,000-30,000 km beyond the points that competing products would be drained, Petro-Canada says.

Bigger loads lead to bigger stresses, too. “When you have more of that combustion you’re going to generate more acids you’re going to be generating more wear,” Pettingill said.

A Man racing truck in Europe is pushing Petro-Canada’s 20W60 oils further still. After six races, the oil stayed within grade, while iron limits were under 20 ppm.

“They drive those trucks flat out,” he added.

Commitments to research and development are clearly continuing in the wake of the company’s purchase by HollyFrontier more than two years ago.

For now, that means a focus on the CK-4 and FA-4 categories. But even those categories will need to change in time.

“They’re hoping to get, from what I understand, 10 years out of it,” Pettingill said, referring to the way evolving emission limits tend to drive the formal requests from engine manufacturers. “But it takes five years to get that going.”

Oil suppliers are looking to the horizon, however.

Pettingill saw the first email to reference a Proposed Category 12 oil a couple of weeks ago. It’s coming, even if a deadline has yet to be set.