Back at Convoy headquarters at the TA Travel Centre, stacks of cash and oversized cheques were being collected and presented. The biggest of these was a $25,000 contribution from Cervus Equipment and its employees.

“This money was raised by all our employees and we basically matched what our employees were doing,” Matt Preston, operations manager for Cervus Equipment and its 13 Ontario locations told Trucknews.com at the event. “Our employees did payroll deductions and one-time deductions. It’s a big cause for our group.”

Among the convoy participants, the driver raising the most funds this year was Joanne Hayward, who raised $5,795 and earned the honour of leading the convoy. The Top 10 driver fundraisers (listed below) raised a total of $21,784.85 between them.

Many in the convoy drove for someone special, who has been touched by this disease. They drove for those who’ve survived, those who’ve succumbed and even the 25,000 or so women (and men) who will be diagnosed with breast cancer in the coming year.

Awards were given for the Best Pinked Out Trucks. Winning the award in the men’s category was Ryan Southern of Outer Limits Transport. Taking top honours among the women was Candy Bourgault, Locomote Transport.

Second place went to Ken Layton of Molson-Coors, third to Dawn Simpkins of Travelers Transport and fourth to Barb Taylor of Hyndman Transport.

The drivers were dressed as colourfully as their rigs. There were pink shirts, pink hair, pink slippers and pink tutus. The Best Pinked Out Team award went to Outer Limits Transport.

During the awards presentation that followed the convoy, organizer Joanne Mackenzie took time to recognize some of the volunteers who made the event possible. 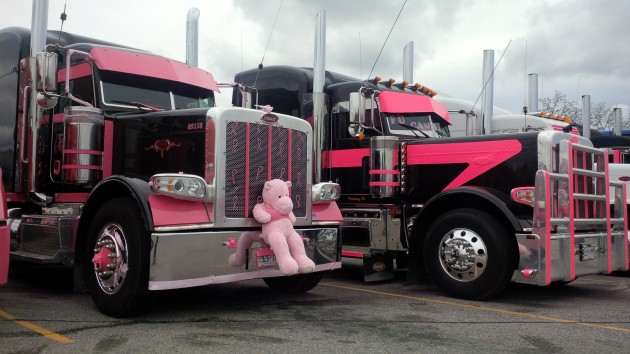 Due to the cold, blustery weather, the good sports at TA Travel Center invited organizers to take the post-Convoy presentations inside. This included a rock’n’roll show from Head On and a performance by Anne Finley. There’s a very good chance this was the loudest rock show ever performed in a truck stop.

Mackenzie said this year’s event was a huge success. While the number of trucks was down by about 15, to 65, she noted a second convoy was added earlier this month in Prescott, Ont. and about 15 Eastern Ontario-based drivers were diverted to that one. It raised about $20,000 on its own, with 43 trucks participating.

“I just want to say thank you so much to everyone for being here,” she said. “Your commitment to this event, and to Joanne, for her passion for this event, is amazing. At the Foundation, we are overwhelmed by her and by all of you here today. On behalf of the Foundation, I’d like to thank you so much for your support. Thank you for creating a future without breast cancer.”