VICTORIA, B.C. – Despite the B.C. government’s announcement that Project Cargo Corridor would make it easier for carriers to acquire permits to move overweight and over-dimensional loads, the provincial trucking association says the regulation only scratches the surface.

The new project, which does streamline the process for carriers looking to acquire a permit to move extraordinary loads from the Lower Mainland to the Alberta border, is a step in the right direction for B.C. Trucking Association president and CEO Dave Earle, but one that took too long to come to fruition.

“This has been a long time coming. It did go live about a year ago, but the difficulty we have with this is it’s taken so long, and it’s the first step of many that need to be taken,” said Earle. “We’re still working in an environment where if you don’t fall under this very specific program of very specific parameters, you’re still having to jump through in excess of 800 pages of regulation.”

Much of the issues arise due to B.C.’s unique and varying topography, and the fact that depending on where you are located in the province there could be sharp curves, steep grades, and bridges for vehicles to navigate.

“Where I struggle, is that these issues are not new,” said Earle. “The curves that are there and the hills that exist are not new.”

Because of the differing terrain, regulations around overweight and over-dimensional loads have been reworked several times, creating a pile of paperwork and various rules depending on where an extraordinary load needs to be moved.

“The structure of the regulation is so terribly flawed that until we really decide to get serious about addressing how extraordinary loads move through the province, this will continue to stifle economic growth and be an irritant for our industry,” said Earle, adding that the system has led to what he called “massive non-compliance.”

“What we hear from the ministry, is that the level of non-compliance in this field is really high. There’s an awful lot of bootleg moves happening and I’m not surprised…when you’re telling me it’s going to take 10 days to get a permit…that customer is going to find somebody who’s willing to take the risk and move it without a permit,” Earle explained. “A lot of it is attributed to the delays and the complexity that go into getting these types of permits. It continues to be absolutely unacceptable.”

In some instances, Earle said carriers looking to acquire extraordinary load permits can wait for several weeks before they are issues.

It is not the fault of government workers, according to Earle, why this is occurring, but rather the fact that they have an “impossible job.”

The BCTA wants to see the government move away from regulations that are specific to certain locations, and instead look at the province as a whole. Earle said vehicle dimensions are tightly regulated in B.C. to ensure they are able to travel anywhere in the province. But once you move up in weight and size, there are specific envelops where loads can be accommodated.

After completing lidar scans of the area, Project Cargo Corridor was able to determine what size loads could safely move from the Lower Mainland to the Alberta border. Earle would like to see this work completed for the entire province, and use the data already acquired over the years of issuing overweight and over-dimensional permits to carriers throughout the province, along with lidar technology.

“We need to take a step back and say ‘what is it that we’re trying to do,’” said Earle.

Project Cargo Corridor pre-approves commercial trucks from the Fraser-Surrey Docks or Lynnterm East Gate to the Alberta border via Hwy 16. It applies to vehicles with eight to 13 axles superloads, GCVW up to 125,000 kg, up to 4.88 meters high, five meters wide, and up to 50 meters in length. 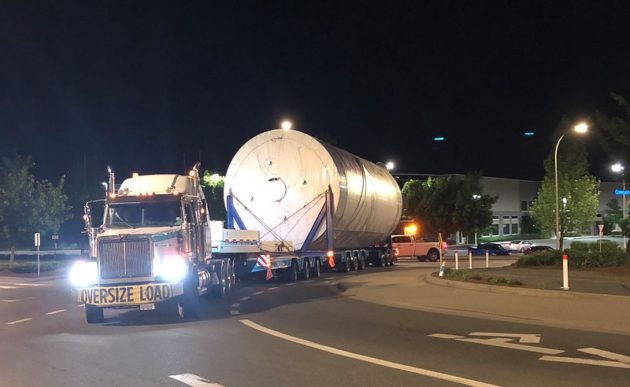