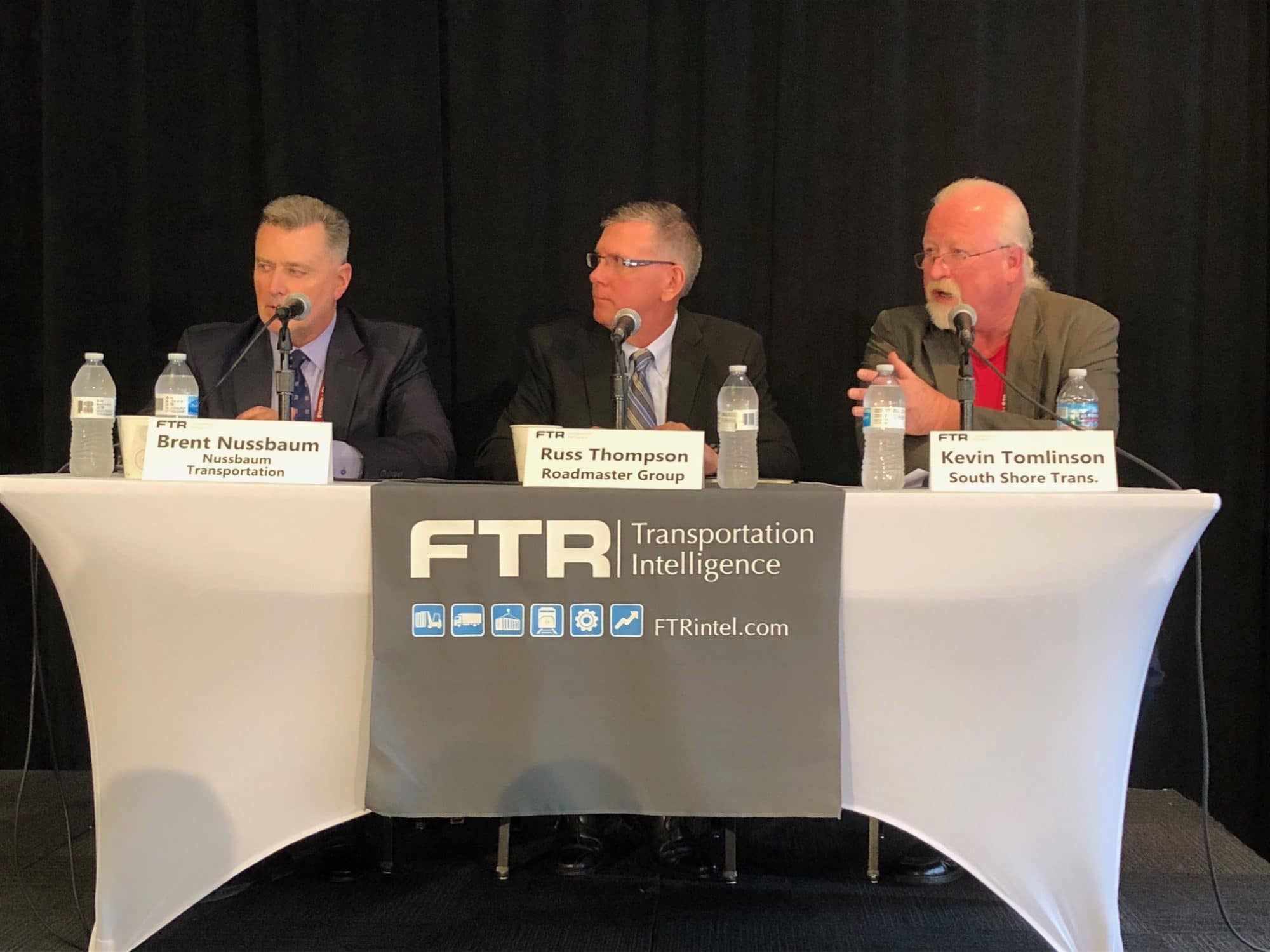 INDIANAPOLIS, Ind. – Safety and driver comfort are driving the way fleets spec’ trucks today, even at the expense of payload.

That was the consensus from three fleet managers who participated in a panel at the FTR Transportation Conference.

“Years ago, we always spec’d for weight,” said Kevin Tomlinson, director of maintenance for 160-truck Ohio flatdeck fleet South Shore Transportation. “We wanted to put as much on the deck as we can. That worked well until everyone started adding exhaust systems, adding driver comfort features, extra batteries, air-conditioning. So we keep changing our tractors around for that.”

At Roadmaster Group, a growing fleet that specializes in high-value loads and hazardous waste, safety has been driving changes to how trucks are spec’d.

“In the last three to four years we have spec’d a very safe truck,” said Russ Thompson, executive vice-president. “We have looked at collision avoidance, roll stability, adaptive cruise. And we spec’ a very easy to operate truck, with air release fifth wheels and automated transmissions.”

Automated transmissions have won over all three of the executives on the panel.

“My theory is, if a driver has his or her hands on the wheel when they’re going down the road, and they’re not worrying about what gear they have to switch into, they’re a much safer driver,” said Brent Nussbaum, CEO of Nussbaum Transportation.

All panelists agreed reliability has greatly improved on the latest generation tractors. They also agreed that spec’ing decisions play a big role in driver retention. Other strategies to fill seats include increasing pay (Roadmaster just put through its biggest pay increase in its history) and training less-experienced drivers.

“We have pilfered each others’ drivers for years,” Nussbaum admitted. “Some years back, we recognized we were going to have to do some training or we were going to be in trouble. We couldn’t afford to take other peoples’ drivers and quite frankly, sometimes we didn’t want to.”

Nussbaum partnered with a local college that offered a truck driving school, and now accepts graduates from that program for finishing under the carrier’s own tutelage. Many of these drivers are college-educated and younger than the average truck driver. The program allows Nussbaum to train them on efficient driving before they learn bad habits elsewhere.

All three fleets indicated they’ll continue spec’ing trucks with large sleeper cabs, even for drivers who don’t do long runs. Nussbaum said it’s tricky to sell day cabs, and even mid-roofs are more challenging to sell than an over-the-road truck.

Nussbaum has installed in-cab cameras that are forward- and rear-facing, but the cab-facing camera can be deactivated by the driver when the truck is stopped.

“We lost five drivers over it, but three came back the next year,” Nussbaum said. “It’s almost a non-event, we don’t even hear about it anymore.

Both Nussbaum and Roadmaster are spec’ing tractor disc brakes, but would like to see the cost come down further before making the switch on trailers.

“We’re still at $3,000 (more) a trailer,” Nussbaum said. “With all the safety technologies we have on them, we just haven’t seen the payback on that yet. We’ve been pushing for a cost reduction but are struggling to make progress on that.”

“If you bonus them on fuel, you’ll get them to open those tails up,” he said.