PARIS, Ont. – It’s convoy season in Ontario — and one of the longest standing convoys in southern Ontario rolled down Hwy. 401 this weekend for a good cause.

The 12th annual World’s Largest Convoy in support of Special Olympics Ontario kicked off in Paris, Ontario on September 17 and lived up to its reputation as being one of the more heartwarming trucking events of the year. 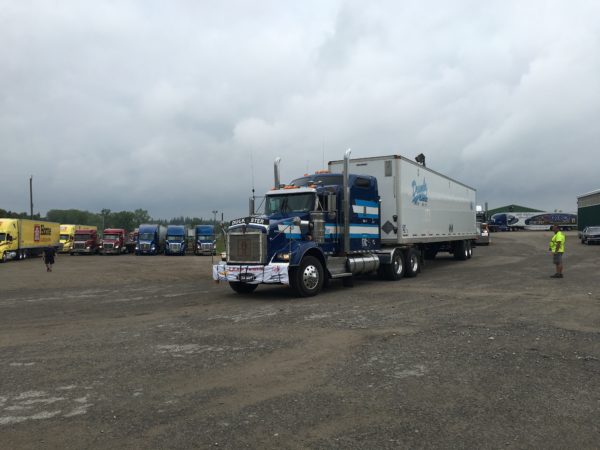 The convoy is unique from others in that drivers who raise money for Special Olympics Ontario to participate in the convoy, get paired up with a Special Olympics athlete who rides in the truck with them for the 120 km trek from Paris to London, Ontario and back. And from the time the athletes walk through the doors of the Paris Fairgrounds to meet their driver partners, it’s all smiles – from the drivers, volunteers and the athletes themselves.

“The truck drivers are so sincere,” said Kaitlyn Lindensmith, a district devlpoer for Special Olympics Ontario. “As soon as they walk in here they’re beaming and they’re so excited to be partnered up with an athlete. They come here and they tell us about how they remember the athlete they had ride with them years ago in the convoy.”

“And for the athletes, it’s just a hoot for them,” added Jim Murray, event advisor for Special Olympics Ontario. “They love riding in the trucks with the drivers.”

This year, the event saw 74 trucks participate (up 2 from last year) and Tammy Blackwell, the long-time event coordinator, said that this year the event had the most athletes ever join the convoy.

“We have 50 athletes here today which is the largest number of athletes we’ve ever had at the convoy, so we’re really happy about that,” Blackwell said. “I have seen the impact the convoy has had over the years, not only on the athletes but with the drivers. This event and the relationships between the athletes and the truckers go beyond just this one day.”

“And we have law enforcement here from all over — Halton, London, and Peel who are helping to support the cause,” Blackwell added.

Since its inception in 2005, the event has raised more than $530,000 and that number is growing. At the time this story was published, funds weren’t all tallied up, but Blackwell said she knows the funds raised this year already surpass last year’s $52,000 raised. 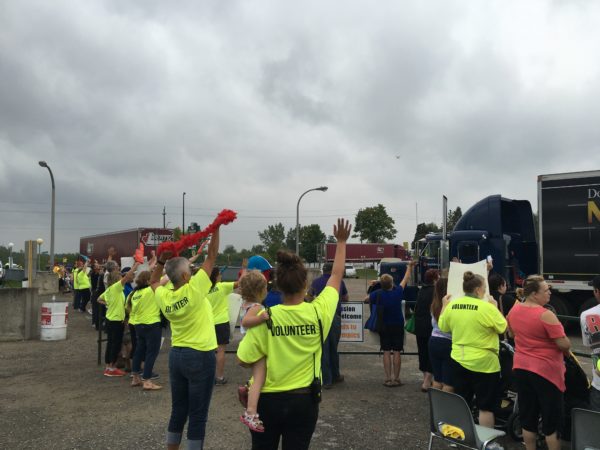 “Our drivers and our sponsors blow me away every year. Just when I think I’ve seen it all, they surprise me and bring in more money than I can imagine,” she said. “We’ve had some drivers bring in $10,000 themselves and I don’t know how they do it. But we are so thankful for them.”

One driver in particular was honored this year for his long-time generosity to the cause. To date, Donald Poll of Drumbo Transport has raised more than $50,000 for the event and to thank him, Blackwell had a special Kenworth Texas bumper made for him and his truck.

Special Olympics Ontario says the funds that get raised at the convoy goes right back to the athletes and the community one way or another, whether it’s to pay for renting out arenas, sports equipment or to help pay for transportation for the athletes to travel for different sports events. Most of all, the event really raises awareness for Special Olympics and what they do for communities all over the province.

“One of the Special Olympics’ biggest obstacle is public awareness,” Lindensmith said. “Not many know about us or what we do, so having a big convoy driving down the 401 for us is huge because it gets us out there.”

“It’s the big hearted trucking community that helps raise the funds and awareness for the Special Olympics movement,” added Glenn MacDonell, president and CEO of Special Olympics Ontario. “The athletes and those that benefit from the proceeds look forward to this event every year.”

The event also had a 50/50 draw and a raffle to help drive up funds raised.

The Top 12 fundraisers for this year’s World’s Largest Truck Convoy for Special Olympics Ontario were as follows: