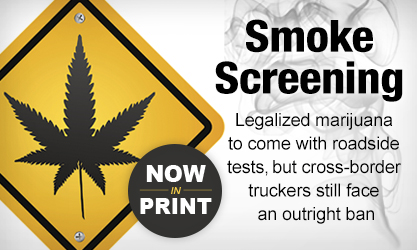 Think of it as one of the first steps to help clear the air around a campaign promise.

The federal government has officially unveiled its plans to legalize recreational marijuana by July 2018, and promised as well to introduce some of the toughest impaired driving laws in the world – complete with roadside saliva tests that can be demanded by police.

“There is a great deal of work ahead of us,” said Bill Blair, parliamentary secretary to the minister of justice, stressing that lessons will be learned from earlier legalization in Colorado and Washington State.

The shift will undoubtedly make a difference in truck driver testing regimes, most of which have focused on operations that cross the Canada-U.S. border. The U.S. Department of Transportation is standing firm that it does not allow truck drivers to use any Schedule 1 drugs including marijuana. Even if the marijuana comes with a prescription or was consumed in a state that allows recreational use.

“The U.S. is not likely to respond well to Canada’s legalization of marijuana for recreational use, especially when it comes to its use by commercial drivers,” says William Hurst, a lawyer based in Indianapolis, Indiana. “While many U.S. states have recently legalized medical marijuana and even its recreational use, the federal government seems to be moving in the opposite direction, as evidenced by U.S. Attorney General Jeff Session’s obsession with demonizing the drug.”

When the U.S. Department of Justice told federal prosecutors in 2009 that they shouldn’t focus on people who complied with state laws when using -marijuana, the Department of Transportation balked. As it stands, “it remains unacceptable for any safety-sensitive employee subject to drug testing,” the regulators say in a 2012 policy that continues to guide decisions.

“These circumstances lead me to believe that truck drivers from Canada who may choose to indulge in the recreational use of marijuana would still be criminally charged and punished if they were driving while marijuana was present in their system,” Hurst adds.

The Canadian Trucking Alliance is already exploring the truck-specific testing issues as part of a coalition of about 20 employer -associations and employers in safety–sensitive roles.

“We’re not getting involved in the issue of social policy,” says David Bradley, Chief Executive Officer of the alliance.  “Our concern first and foremost is with respect to public and workplace safety … we don’t really care what people are doing in their own personal time as long as they show up at work, fit for duty.”

“We need to have a regulatory framework in Canada to be able to conduct workplace testing – including the old chestnut of random testing.”

In about two decades since the U.S. pulled Canadian carriers into testing requirements south of the border, there has been “no end” to legal challenges, human rights challenges and reviews,
he adds.

Employers did win one recent challenge. Ontario Superior Court Judge Frank Marrocco ruled that the Toronto Transit Commission should be able to conduct random drug and alcohol tests. That had been opposed by Amalgamated Transit Union 113. But the tests are now a reality, and the first tested employee even failed.

“There will be more testing, and specifically random drug and alcohol testing,” says Connor Page, a spokesman with DriverCheck, which provides driver medicals and drug screening. “There’s really nothing restricting companies, assuming they don’t have a unionized workforce. We have lots of clients that already do that, and there are some court cases that set a precedence for allowing that.”

But employers that currently use urine tests in their programs will likely begin the shift to testing for oral fluids, Page says. Even if a test can’t prove a driver is impaired, the tighter time windows that come with the oral test results will help determine if someone consumed marijuana during their shift, he adds.

“It’s going to become an ever-expanding problem,” says Mike Millian, president of the Private Motor Truck Council of Canada, which has been among several industry groups to host panel discussions about drug testing ahead of the federal announcement.

But employers need help, he says. The group has already reached out to the -federal government, requesting support for testing regimes.

“The federal government is saying, ‘We’re going to legalize it and good luck to you,'” Millian says.

— The online version of this story corrects a typographical error in our print edition. The U.S. Department of Transportation is standing firm that it does not allow truck drivers to use any Schedule 1 drugs including marijuana. Today’s Trucking regrets the error.