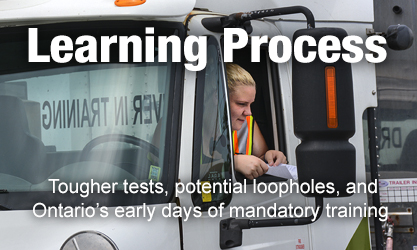 TORONTO, ON — Darryl Robitaille belongs to a rare graduating class, one of the first future truck drivers to study under Ontario’s new Mandatory Entry-Level Training (MELT) regime. That means he had to complete at least 103.5 hours of approved training before the Ontario Ministry of Transportation would allow him to take the road test for an AZ licence to drive tractor-trailers.

He failed on the first attempt.

“The road test I did fine on,” says the resident of Caledonia, Ontario, referring to actions like steering and backing. His challenge was with new questions linked to pre-trip inspections. “I was extremely nervous,” Robitaille adds. This despite the fact that he personally completed a 200-hour training program, well above the mandated minimum introduced on July 1. But with a little extra studying he passed the test on his second attempt. Now he is looking to secure his first job behind the wheel.

Robitaille can take comfort in knowing he wasn’t alone. Exact figures have yet to be compiled by the Ontario Ministry of Transportation, but training schools across the province have reported higher-than-usual failure rates in the face of new tests at Ontario’s DriveTest centers.

Written tests now include 30 questions, up from 20 that existed earlier in the year, and are more specifically geared toward related licence classes. The directions of road tests are also more prescriptive than ever before, specifying the number of tasks and subtasks that licence candidates need to demonstrate, so there’s less room for interpretation by evaluators. In a bid to break away from circle checks that some trainees were memorizing, the ministry has also introduced randomly generated questions about pre-trip inspections. When presented with a component, those being tested must explain the minor and major defects that can arise, as well as what they would do in each case.

It’s been a learning process for trainees and trainers alike.

“When procedures change, there’s
obviously going to be some growing pains.”

“When procedures change, there’s obviously going to be some growing pains,” says Matt Richardson, sales and operations manager at KRTS Transportation Specialists, where Robitaille completed his training. “It’s got to do with the examiners getting used to a new way and protocol of testing.” 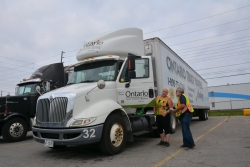 “The more-difficult test is better,” Richardson says, suggesting that the new training regime will bring an end to most of the so-called licensing mills that prepared trainees for ministry licensing tests but often failed to develop the skills needed to earn a job.

Yvette Lagrois of Ontario Truck Training Academy, headquartered in Oshawa, is among those who believes there is still room to improve the new test procedures themselves, particularly when it comes to the layout of backing exercises. “Previously the cones were further back,” she says, suggesting that today’s layouts for 90-degree turns align more with day cabs than highway tractors.

While schools have insights that could help address issues like that, she says the exact test changes came as a surprise. “We should have had at least some sort of meetings with those who are providing the training,” she says. “I’m sure there’s some political reason why we didn’t get it.”

But Lagrois also believes the new training standards have helped to force out schools with questionable training practices. “They’re looking for different business models,” she says of those operations, many of which had no dedicated training facilities. In some cases that might mean shifting training businesses to focus on DZ licences, which allow a driver to operate a truck or vehicle combination weighing more than 11,000 kilograms if the towed vehicle weighs less than 4,600 kilograms. That licence class is not included in the new mandatory training regime. “These people who were in the business for training were also freight operators,” she adds. “Those will probably move back into being owner-operators. They’ll have to figure out how to make money.”

It hasn’t stopped some private career colleges from looking for shortcuts in the new training path, as they search for ways to attract lucrative students who can represent thousands of dollars in tuition.

In the weeks following the rollout of mandatory training, the Ontario Ministry of Advanced Education and Skills Development issued a blunt memo on news that some schools might not be complying with their approved training programs and conditions – specifically when it came to upgrading BZ or DZ licence holders to an AZ licence, or offering hourly lessons. (The holder of a B licence can drive a school bus that seats more than 24 people, while the Z endorsement indicates the licence holder can operate a vehicle with air brakes.)

“Any AZ training which does not adhere to the MELT standard does not provide the student with the ability to challenge the AZ road test,” the memo stressed, threatening potential fines of up to $250,000 for corporations as well as $50,000 fines and one-year prison terms for individuals.

Approved schools must now use an online portal to identify students who have met the new training requirements, before the individuals are allowed to take the road test. Prior to July, anyone could be tested.

Schools that don’t comply with the new rules could have programs revoked, requiring refunds for students, wrote Terry Tretter, manager – compliance and enforcement unit at the Ministry of Advanced Education and Skills Development’s Private Career Colleges Branch. Ads promoting unapproved licence upgrading programs and other “non-vocational AZ programs” could run afoul of the province’s Consumer Protection Act, too, which has similar fines and includes maximum two-year prison terms for individuals.

Like private career colleges that support other industries, these schools and trainers can issue “advanced standing” — and that counts toward the mandated 103.5 hours, depending on a trainee’s previous experience or demonstrated skills. Each school must have its related policy assessed by someone recognized as a qualified third party, and approved by the ministry’s superintendent.

“The application submitted by a PCC (Private Career College) is reviewed separately by the adult education experts and sector subject matter experts,” explains Ministry of Advanced Education and Skills Development spokeswoman Ingrid Anderson. “The advanced standing policy may include such factors as the documented types of training received, the number of years of driving experience, and other relevant qualifications that would make an individual eligible for advanced-standing status.”

The emphasis on “may” is ours. Each school can propose its own standards.

“It’s not something that’s new. The schools, or some of them, have been doing it for some period of time,” says David Bradley, the retiring Chief Executive Officer of the Ontario Trucking Association, and now interim Chief Executive Officer of Trucking HR Canada – the organization that established National Occupational Standards, which helped define minimum training outcomes.

The concept can also make sense depending on an individual’s background, he says, referring to DZ drivers with many years of experience, or people who grew up around farm machinery. “Ultimately what you would want is a situation that provides for advanced standing, but is subject to enough oversight that it precludes the irresponsible people from taking advantage of the situation.”

“If you can exempt as many hours you want, then MELT is melted.”

The lack of common tests to confirm advance standing concerns Naeem Cheema, the owner of Pine Valley Driving Academy in Etobicoke, especially since individual policies are ultimately approved by ministry personnel who are not necessarily experts in trucking. 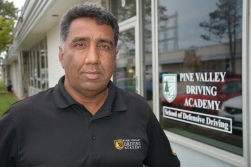 “We should have a standard how the road test should be, [and] there should be a knowledge test,” Cheema says, suggesting that there should also be limits on the number of training hours that can be trimmed. “Advanced standing has to be standardized in terms of how many hours in class, in vehicle, in yard you can exempt … If you can exempt as many hours you want, then MELT is melted.”

In the weeks after the 103.5-hour minimum was introduced, he says he heard from potential students who were promised they could be trained for just $2,000, covering all the material in a fraction of the hours. “These are not too many hours,” he says of the 103.5-hour limit. “So what? Make them know more.”

If he had his way, the 103.5 hours would be the bare minimum. Long-term drivers may still lack formal training in factors like Schedule 1 inspection standards and Electronic Logging Devices, he says as an example. “MELT, the way it’s laid out, is beautiful.”

“Maybe we need to make them enter the number of training hours they had behind the wheel,” suggests Private Motor Truck Council of Canada president Mike Millian, referring to the information that schools provide about trainees with advance standing. Someone who has worked for 20 years as a DZ driver is not going to require the same amount of training to secure an AZ licence, he says. But even then, he believes there is room for more training than they had in the past.

“You shouldn’t be able to go any lower than half (the required behind-the-wheel hours),” Millian says. “They’re still pulling a trailer.”

Regardless, the advanced standing option doesn’t apply to carriers who train and upgrade employees under a Driver Certification Program.

“At the end of the day, when we went into this thing with MELT, we said we wanted to take back our industry from the training schools,” he adds. “The benefits still far outweigh the issues. It’s a work in progress.”