SCHAUMBURG, IL – Advanced driver assistance systems like the ones that sound an alarm if you’re tailgating — or even apply vehicle brakes automatically — are proving themselves to be more than a novelty.

Schneider has already equipped 12,000 of its trucks with autonomous emergency braking systems that will act if a crash seems imminent. Related collisions have now dropped by 69% and their severity has plunged 95%, says Thomas DiSalvi, the fleet’s vice president – safety and loss prevention. “This is ready for prime time.”

The underlying technologies have clearly come a long way, according to participants in a roundtable hosted this week by the U.S. National Safety Council. 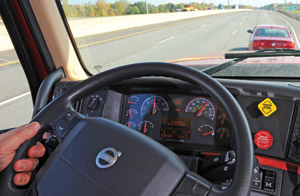 Fred Andersky, director – customer solutions and marketing at Bendix Commercial Vehicle Systems, refers to early Eaton VORAD collision warning systems as “the old bridge detection system” because of false warnings that were triggered by more than surrounding hazards. But it all laid the groundwork for the idea that technology could generate safety-related responses, he said.

Gains have also been based on another longstanding equipment update in the form of Antilock Braking Systems (ABS). Those made possible the Electronic Stability Controls (ESC) that automatically apply selected brakes to help prevent rollovers. Meanwhile, the data from cameras and radar needed to monitor lane positions and following distance have built on such brakes and stability controls to create collision mitigation systems that keep a virtual foot hovering above brake pedals.

It’s why Andersky is concerned by suggestions that the U.S. Federal Motor Carrier Safety Administration might sacrifice plans to mandate Electronic Stability Controls – answering a presidential order to identify two regulations that can be eliminated whenever a new regulation is introduced. “It does become that foundation to getting these advanced safety technologies retrofitted in the future,” he said.

Canada has mirrored the pending U.S. stability control mandate that rolls out beginning in August.

Meanwhile, there are still plenty of questions to be answered as advanced driver assistance systems evolve, such as exactly how alerts and warnings should be delivered, roundtable participants stressed.

Feedback is currently offered using everything from lights in the dash to buzzers and vibrating seats.  The latter example of haptic feedback tends to do the best job at attracting attention, said Ananda Pandy, a Wabco system designer. “The driver is able to react much faster.”

No matter how warnings are delivered, there is a learning curve for those who sit in a driver’s seat of any kind. Systems that apply foundation brakes often include a delay before taking action, Pandy offered as an example. “We need to make sure the driver still has control and he has all the time to react,” he said. Drivers also need to know the difference in gentle brake applications linked to adaptive cruise control and the aggressive braking to help prevent or minimize a crash.

“It can’t just be, ‘Here’s the truck and go,'” stressed Schneider’s DiSalvi. “There’s a lot of technology in the truck and [drivers] will confuse different systems.”

Different approaches are being used to inform drivers about what a truck has and how it will react. Information screens sometimes display details when a truck is first started. Bendix has also developed training videos with different truck models, in part because there are limits to traditional manuals. How many people, Andersky asked fellow participants, have read the operating manuals for their car?

Any of it comes with a price, of course. An automated emergency braking system might add up to $150 per month to the cost of a truck over a five year lease, Petty said. Then again, that is a minor expense when compared to the price of a collision.

When it comes to identifying a Return on Investment, reports from one technology can also help to make the business case for the next. If most warnings are triggered because drivers are following too close, for example, that might identify the need for autonomous emergency braking systems.

While such tools could control insurance premiums, that takes time. These costs tend to be based on five years of experience, explained Robert Crescenzo, vice president of Lancer Insurance. Even when an investment is made, a fleet still needs to account for the previous four years and 364 days. But it will make a difference.

“If you reduce the frequency in the number of claims, it is likely you can reduce the [crash] severity,” he said. “It’s injuries that we spend the most money on. Repairing people is much more expensive than repairing vehicles.” And when people are injured, lawyers look for the deepest pockets. Like truck fleets.

There could even be cases where technology contributes to a crash. Some of the most expensive insurance claims related to trucks running off a road can be traced to fatigued drivers who had the cruise control engaged, he said. And what if a vehicle behind a hard-braking truck doesn’t have the technology and crashes, asked Kevin Lewis of the American Association of Motor Vehicle Administrators. Who is at fault there?

For his part, Andersky stressed that there are limits to what the technology will do.

“These are driver assistance systems. They aren’t driver replacement systems,” he said. “They’re to back up the safe driving practices and safe driving habits that drivers have today.”

“You can equip a truck with all the greatest stuff in the world,” agreed Adam Gregori, president and Chief Executive Officer of Sentinel Transportation. “If you don’t use it properly it can be your worst enemy.”

– An earlier version of this story was edited to remove a comment that had erroneously been attributed to Adam Gregori. Today’s Trucking regrets the error.