TORONTO, Ont. — Try as they might, managers at Sutco Transportation Specialists couldn’t find the drivers they needed. A booming B.C. economy ensured of that. Job ads were answered with a deafening silence, and the pressure to find new personnel continued to mount.

“We kind of exhausted the options,” says Doug Sutherland, Sutco’s vice-president and general manager. “We had trucks sitting that weren’t running, and then we had customers looking to grow and we couldn’t help them.”

Since 2012, the Salmo-headquartered operation with 135 employees has been welcoming temporary foreign workers under a program that allows foreign nationals to fill short-term labor shortages. To date it has sourced about 60 experienced drivers from Jamaica, Poland and Croatia. Forty are still with the fleet today.

British Columbia fleets like Sutco are the largest employers of such drivers these days, hiring 934 in 2017. Quebec was the next-closest province with 166 approved drivers, while New Brunswick rounded out the top three jurisdictions with 108.

The numbers vary widely from one region to the next, but that’s by design. Each opening is approved only after a successful Labour Market Impact Assessment (LMIA) — a process used to prove there aren’t enough Canadians available to fill a region’s specific job opening.

But Sutco has never seen the program as a “temporary” solution. Once one of the drivers has been with the fleet for nine months, they are led to B.C.’s Provincial Nominee Program to apply for permanent residency.

It isn’t the only fleet taking this approach in the face of an intensifying labor shortage.

Manitoba-based Arnold Bros. Transport recruiters tell applicants right away that the fleet has no plan to renew work permits. Each “temporary” employee is expected to apply for permanent residency after six months. “We want you to work for us because they choose to work for us – not because our name is on [work] permits,” says Rob Wensel, director of driver services. It also helps with the related $2,500 application fee, spreading the personal cost over seven to eight months of payroll deductions.

“There’s not enough people in our country that want to be professional truck drivers,” says Stephanie Theede, vice-president of human resources at Westcan Group of Companies, which has successfully sourced drivers from more than 20 countries including the U.K., Germany, Romania and the Ukraine.

And these are all experienced drivers. Sutco’s applicants have at least two years of experience in their home countries. But they are still required to complete further training at Mountain Transport Institute before earning the licence needed to drive here.

Training needs can also vary depending on a driver’s country of origin. The drivers from Poland and Croatia have winter driving experience, but tend to need more language support than their counterparts from Jamaica, Sutherland explains. Those from the island nation tend to have stronger language skills, but require additional training after the first snowfall.

This is on top of the visas to secure and paperwork to process. And the fleet also helps with the many “little things” needed when relocating to Canada, such as establishing a Social Insurance Number, bank account, finding a place to live, and getting a cell phone. “There’s a window when you come to Canada you don’t have a medical for about three months,” Sutherland adds as an example. “We bridge that gap.” 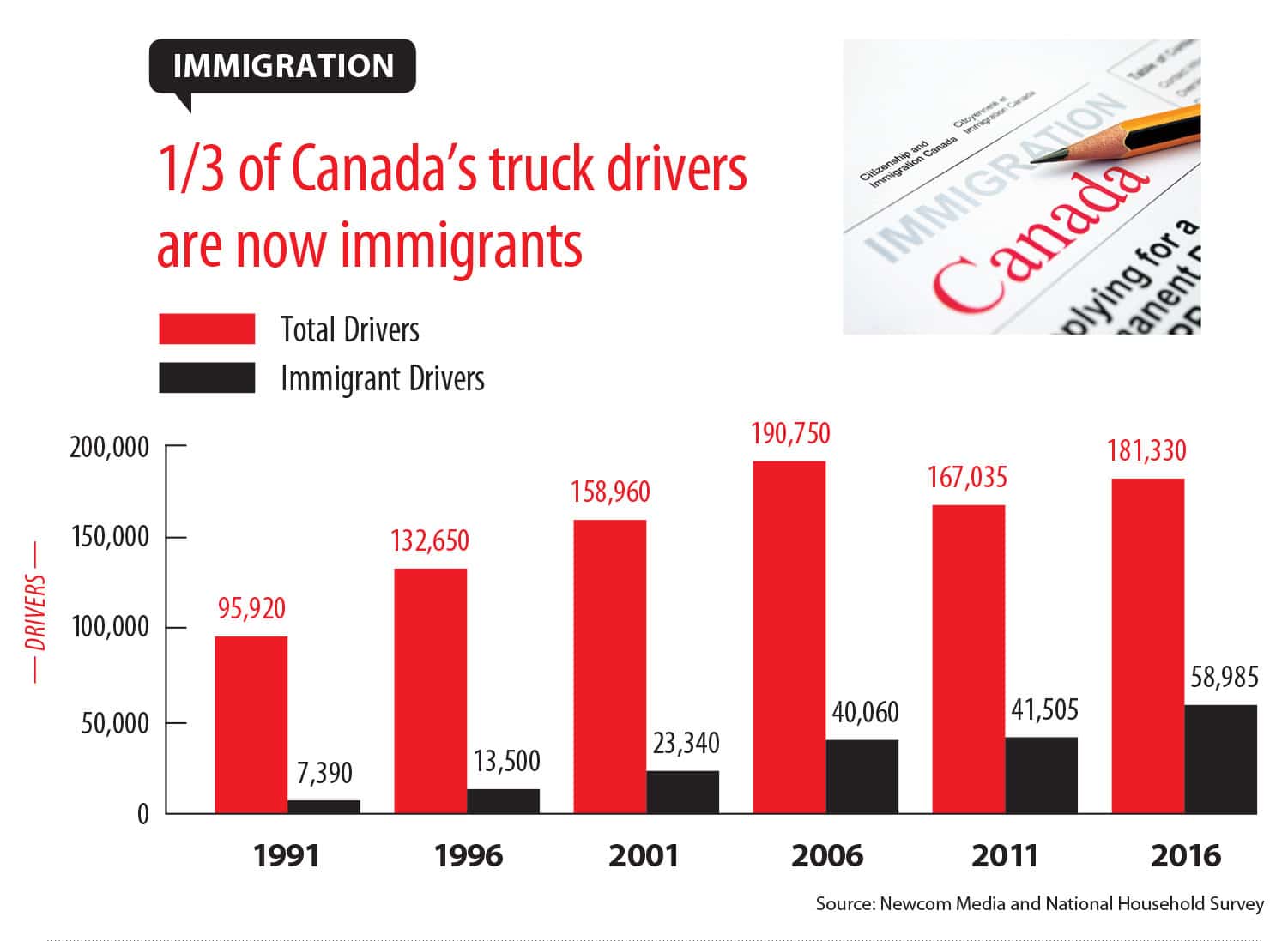 Canada’s Temporary Foreign Worker Program hasn’t been without controversy. Individual employers have been accused of abusing a process described as a “last and limited resort” to been labor needs. In 2014, governing Conservatives tightened application processes and increased fees, and banned the use of the workers in regions were unemployment rates were above 6%.

“At the time, the political climate was such that they wanted to try to discourage some abuses of the program,” says Angela Splinter, the CEO of Trucking HR Canada. Some fast food outlets, for example, were using the program to find people to flip burgers.

Wensel says that has led to many misconceptions about how the program has been used to meet trucking’s intense labor shortages. “Part of the perception, whether it’s your drivers or the general public, is [that temporary foreign workers] are brought in at a lower rate of pay, and they’re brought in to replace Canadians. In transportation, that’s simply not true,” he says.

But the changes clearly affected the way the broader program was used. Where 163,000 temporary foreign workers were approved in 2013, the number plunged to 90,000 by 2015.

There are still challenges to overcome. Auditor General Michael Ferguson issued another scathing review in 2017, questioning things like the way regional labor shortages were confirmed. “These findings matter because the program was designed to help employers fill job vacancies that they cannot otherwise fill,” Ferguson said in his report. “Canadians expect the department to manage the program in a way that makes sure the program is used to respond only to real Canadian labor market shortages.”

Sutherland agrees that the system needs careful checks and balances. “This is really important for our industry, but it’s also extremely important that it’s not abused,” he says. And there are clearly cases of abuse happening. He’s answered calls from job candidates who asked where their fees should be sent. They sound surprised when learning there are never any fees involved. It’s because other carriers have told them it would cost $5,000 to add their name to the all-important LMIA needed to identify openings, he says.

But the fleet executive is also frustrated with the bureaucratic red tape that surrounds legitimate applications.

When Human Resources and Social Development teams hosted trucking industry roundtables across Canada this summer, they heard many common frustrations — particularly as they relate to the shifting requirements of an LMIA. The related applications cost $1,000 per identified job opening, and they can be cancelled because of something as innocuous as a poorly worded recruiting ad, Sutherland says. One mistake and the fees are lost.

Sutco had one application in the works when the region’s median wage rate jumped $6 to $32 per hour. The only way that particular paperwork would have been approved would be if he had applied that wage across the entire fleet. The application was withdrawn, but the government kept the $15,000. The only saving grace was that the next application was processed in two days rather than the typical two to three months.

“Everything with the LMIA has to fit into their comfortable boxes,” Wensel says of the all-important documents. Individual sections focus on hourly wages, and how much overtime will be paid after 40 hours of work. But drivers are not paid overtime until after the 60th hour, and few are paid hourly. “You have to fill it out and add a huge addendum page that re-explains how you pay them.”

Application fees were another sticking point. The labor needs of an employer with 500 trucks or 10 trucks will be different. Not only that, the information still has to be delivered by fax or registered mail rather than some sort of web portal that shows where an application is in the process. “It’s like playing roulette,” Wensel adds. He also questions whether those already participating in the program should require the same vetting process for every subsequent application.

Splinter sees the value in establishing a trusted employer model, which would expedite applications for those who have already demonstrated sound HR practices. And the Canadian Trucking Alliance has been asking for the government to open more immigration channels to industry employers.

Success stories are often connected to fleets that have offered support beyond a job offer and paycheque alone. Wensel, for example, sees the value of pairing new hires with other foreign nationals who have been in the country for a year or more.

Splinter stresses the value of recognizing that there are different cultures to integrate, too. “You want to ensure you’re managing any tensions or cultural biases that may exist,” she says.

“There is a sense of community among our international employees,” Theede adds. “There’s been somewhat of a buddy system and a community formed … when one person comes and is established, they’re pretty inclined to be helpful.” And that has led to more successes, as existing participants refer other applicants.

The successes don’t end there. “We’ve added 150 people to the neighborhood around our officers,” Wensel says, referring to the affect on the broader community. “They’re becoming Canadians.”

Adds Sutherland: “With most of them it’s changed their lives and what their lives will look like moving forward.”

From Wales to Westcan

Chris Harris was flipping through a Welsh newspaper when he found an ad promoting employment opportunities in Canada. He had fallen in love with the place during a vacation, and he and his wife Sandy were already looking for a new adventure for their family of four.

“Why not?” they asked each other.

The pair went to an employment fair that largely featured immigration consultants, but Chris knew he already wanted to continue his career as a driver. It’s at this show that they bet recruiters from Westcan Bulk Transport. Everything seemed to fit.

Soon they were landing in Calgary, and heading to Edmonton to work. Chris set to training for a Class 1 licence because his U.K. qualifications weren’t recognized by the government. Sandy was hired as a driver administrator, moving into the HR department a year later. The fleet actually helped her obtain her HR designation through the University of Alberta.

The move came with its share of culture shocks. Canadian employers offer less vacation time than those in the U.K., Sandy says as an example. Then there was the shock of an Edmonton winter. “We wondered what this would feel like,” she says with a laugh. “It was cold, but it was also an adventure. We came to Canada knowing that there would be massive changes, and embrace the change that came to us.”

“Canada has been a land of opportunity for all members of our family,” Sandy says. “We came here to embrace change. Canada has certainly lived up to our expectations.”

‘It’s amazing what life brings to the table’

Mario Sipek was frustrated by his job as a truck driver in Croatia. He liked the work, but the pay was irregular. It was time to find something new — and the opportunity came in the form of an ad on a Croatian website that said Canada needs truck drivers.

“That’s when my wife started the research about working permits and the program,” the Sutco Transportation Specialists driver says. And there was plenty of paperwork and waiting time to follow.

Sipek was hired this January, and the fleet’s LMIA was approved in June. The next month he was on the plane.

“It may sound funny, but my biggest surprise was that when a truck or trailer malfunction occurs, my only job is to notify the employer. I don’t have to change tires on my own or find the nearest shop. I don’t have to troubleshoot my way out of it,” says the 15-year driver, now a permanent resident.

The biggest challenge was starting life from scratch, Sipek says of the transition. “I didn’t even have a spoon. I had a suitcase of clothes, memories and hopes.” But in just two years his standard of living was already higher than it was in Croatia.

The Sutco driver remembers watching a documentary about trucking in the U.S. almost two decades ago, telling his family that he wanted to do the same thing someday.  “They laughed, but it happened,” he says. “It’s amazing what life brings to the table.”