TORONTO, Ont. — Randeep Sandhu was working as a production supervisor for a Tier 1 automotive manufacturer when he and a friend began to discuss opportunities in trucking. There was work to be had and freight to be moved in 2005, and a clear need for drivers.

He pulled the AZ licence from his pocket, shifted gears, and never looked back. Their business became LSI (Load Solutions Inc.), which now has about 170 drivers plying the highways of Southern Ontario and crossing the border into the U.S. Most of those who work for the fleet are from South Asia as well.

They are hardly alone. Immigrants from South Asia have accounted for a massive shift in the demographics of Canada’s truck drivers, according to an unprecedented research project conducted by Newcom Media’s editorial teams, drawing on more than 25 years of Canada Census data.

“It’s Punjab in particular,” says LSI’s Sandhu, now the fleet’s vice-president of sales. India’s northern state has a rich agricultural tradition, giving many of the immigrants from there an early exposure to trucks and heavy equipment before they arrive in Canada, he says, suggesting that as a possible reason. And now the applicants are more likely to see themselves reflected in workplace ranks.

Trucking also offers unique economic opportunities for newcomers from any country. While it can take years for an Indian doctor, engineer or accountant to be accredited to apply the skills in Canada, there is a relatively low barrier of entry to earning a truck licence – offering an immediate path to the all-important paycheques needed to establish a new life.

“This is a field you can get into with a minimum of education,” notes Vik Gupta, senior vice-president of sales and operations for Pride Group Enterprises, headquartered in Mississauga, Ont. Compared to the years of schooling that can be needed to secure some jobs, entry-level driving candidates can earn an AZ licence in Ontario with 103.5 hours of training. In other provinces, there are no minimum limits for the training at all.

“Many educated people find this as a good option to get off the ground,” he adds.

It has clearly become more than an interim source of work, though. Many of the newcomers who turn to driving are sticking with the trucking industry. Gupta, who moved to Canada in 2002, was once one of a couple of truck salespeople in the Toronto area who spoke Punjabi. Now he can name dozens who are able to conduct business in the language. Many of the customers he once counted as owner-operators are now running successful fleets. 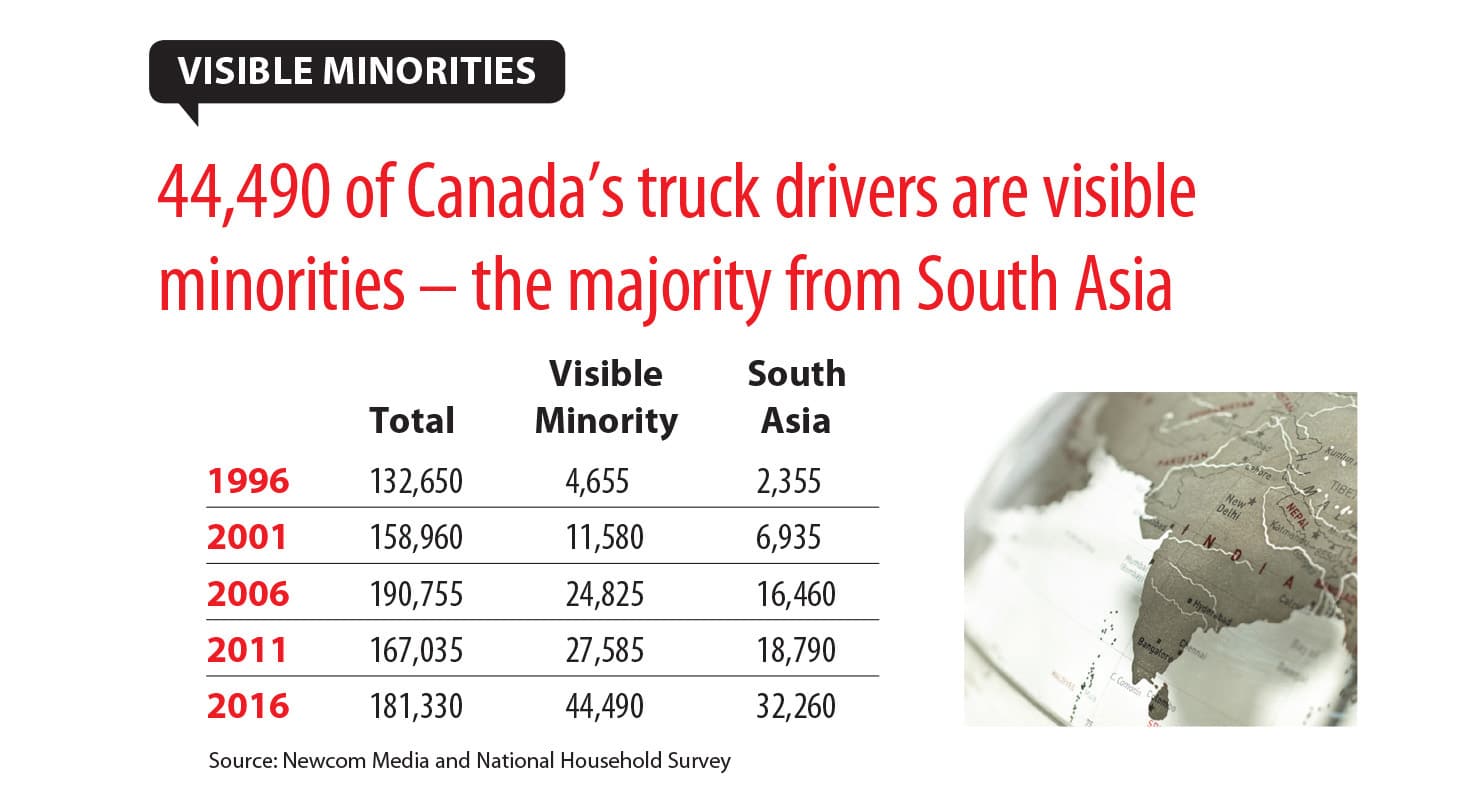 The demographic shift has been nothing short of dramatic.

The numbers are particularly striking in the metropolitan areas of Vancouver and Toronto. In Vancouver, South Asian immigrants now account for the majority (55.9%) of drivers. The share in Toronto is not far behind at 53.9%.

Several factors could account for the connection between this demographic group and trucking. Gupta compares the South Asian­­­ immigration wave to the surge in Italian immigrants from the 1950s to 1970s. “Many Italian or Portuguese immigrants, they found their niche in construction businesses,” he says, referring to the post-war building boom that was happening during that era. The wave of South Asian immigration has coincided with a demand for truck drivers. And when a newcomer knows others who have found success in trucking, they are more likely to consider the career path as well, he adds. 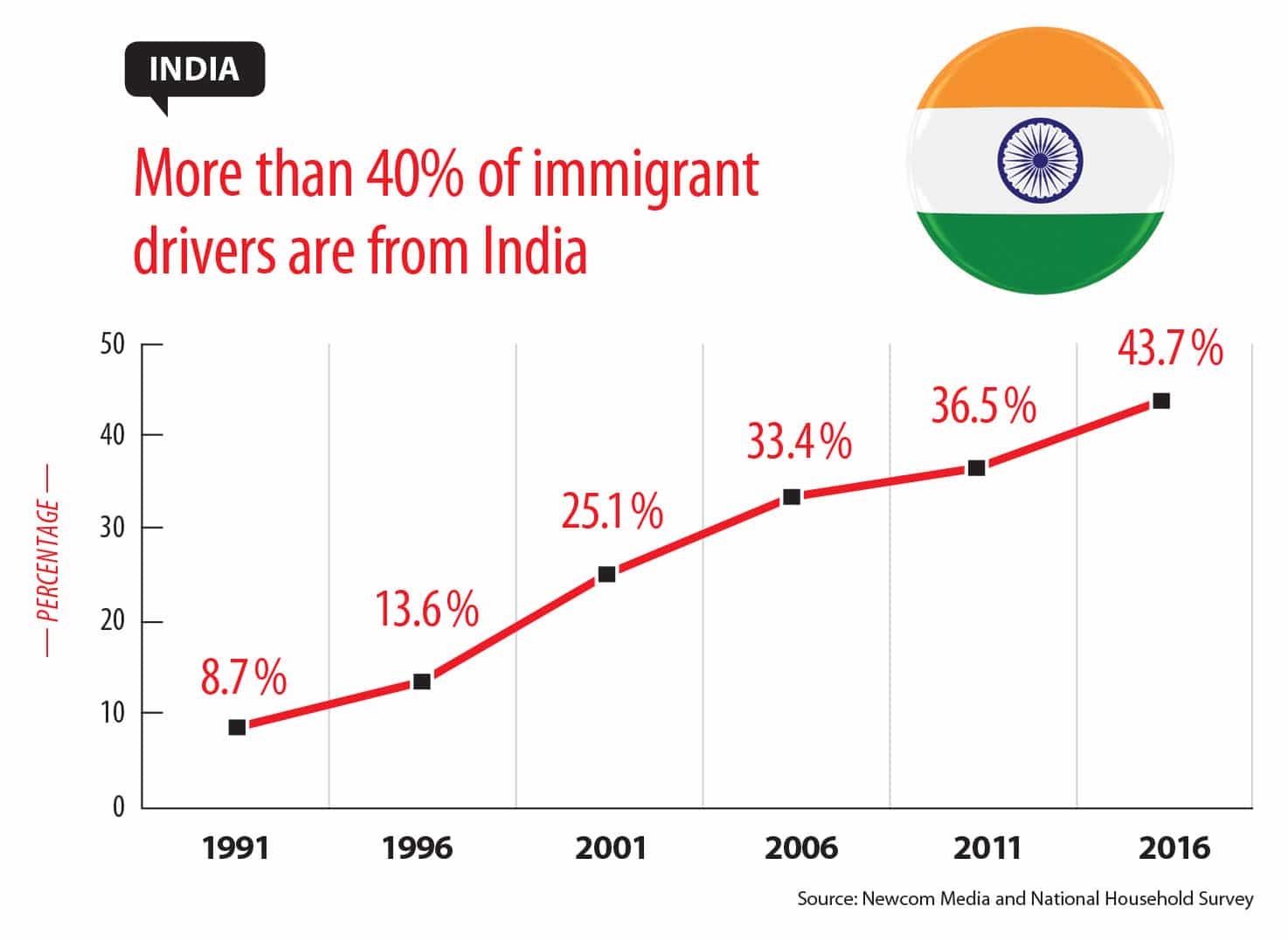 While the most significant demographic shift has involved immigration from South Asia, Canadian fleets are increasingly looking to countries around the world to offset an intensifying shortage of those who want to work behind the wheel. A 2016 report by the Conference Board of Canada predicts Canada will experience a shortage of 25,000 to 33,000 for-hire truck drivers by 2020. The rising age of an average truck driver – now at 48 – means an increasing share of existing drivers are also approaching retirement. Their replacements need to come from somewhere.

Increasingly, the job candidates are coming from elsewhere. Canada had 181,330 truck drivers in 2016, according to the Census data – and 58,985 of those drivers reported that they came from outside Canada.

India has played the biggest role of all. In 1991, just 8.7% of the drivers who identified themselves as immigrants were from that country. By 2016, the share from India had swelled to 43.7%. 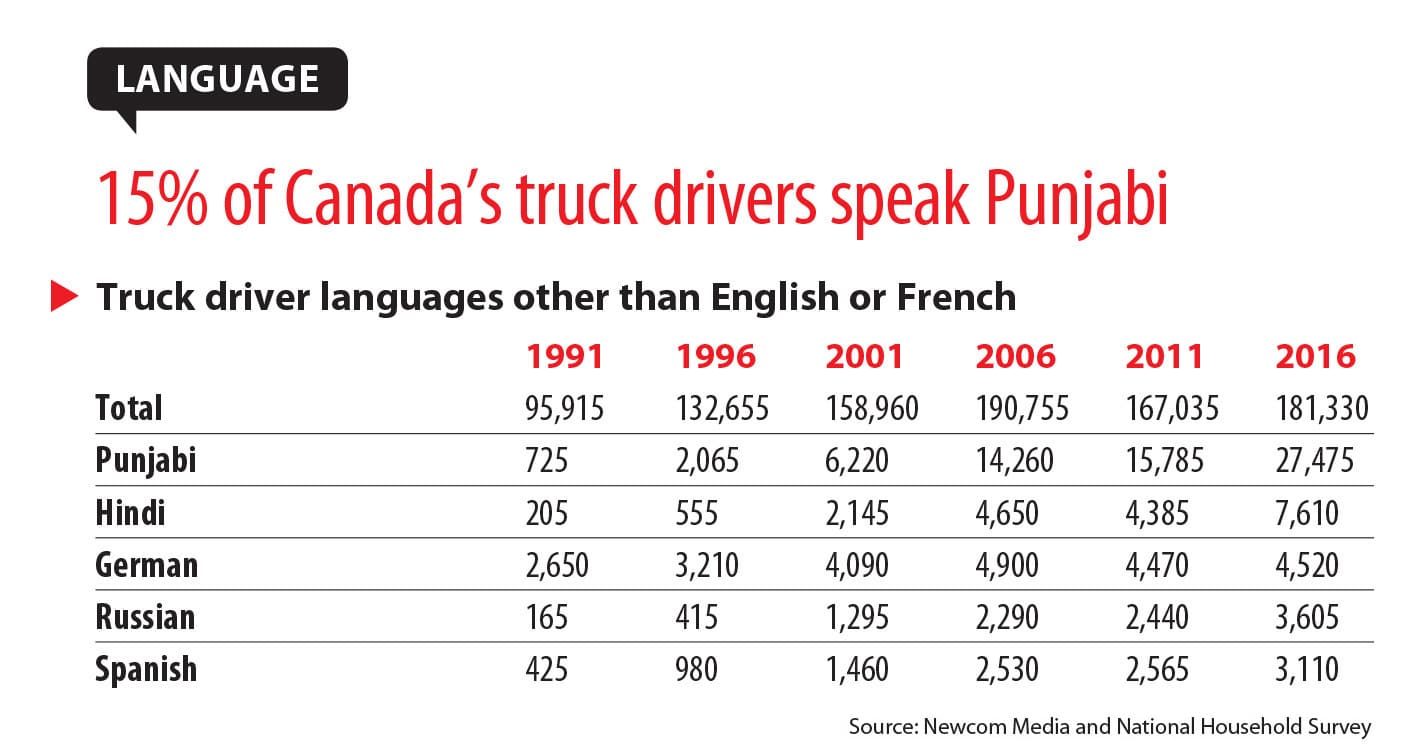 There will be more potential job candidates to come. The federal government has announced plans to expand overall immigration levels to 340,000 newcomers in 2020, up from the 310,000 expected this year. Against this backdrop, the Canadian Trucking Alliance has recently been asking the federal government to focus on matching the newcomers with industries like trucking that face severe labor shortages.

“It doesn’t look like it’s going to slow down,” Gupta says of the shifting demographics. “At least for a decade or so.”

See Change of Face at trucknews.com