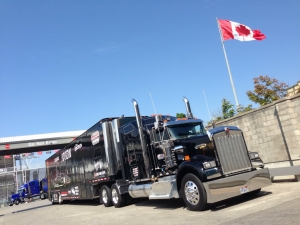 TORONTO, ON – On the NASCAR circuit, support trucks are known as “haulers”. Maybe because the term just rolls off the tongue with a southern accent. (“We haul, y’all.”) But among INDYCAR teams, the tractor-trailers that move cars and equipment from one track to the next are known as transporters.

And they’re in Toronto for this weekend’s Honda Indy.

Teams pulled into Exhibition Place on Wednesday morning, lining 75 of the transporters inside the cavernous Enercare Center as the road track itself was finalized around them. It’s just the latest stop in a series that began in St. Petersburg, Florida in mid-March, and runs until mid-September when everything concludes in Sonoma, California. 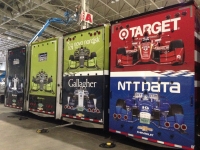 The time windows are tight. The trucks were marshalled in a staging area so they could polish up and show up between 10 and 11 am. Once race day is done, they will all be loaded and back on the road within three to four hours. INDYCAR’s own support vehicles will be out within five hours.

Permanent tracks are the easiest to access because they are designed to accept trucks. Road courses like Toronto present unique challenges. This year especially. The paddocks have traditionally been assembled outside, but a new hotel being constructed in the downtown core required another venue. And that also meant finding new access points around closed streets and redirected traffic.

Tasks like that are left to Louis Parsons, who lays out the paddock area and ensures the trucks arrive. He also has trucks of his own to move, coordinating INDYCAR’s seven support vehicles for business affairs, administration, tech teams, safety equipment, the B-train holding 24,000 liters of fuel to cover the race, and a medical trailer. He is also the go-to source for teams that run into truck breakdowns.

“Pretty well everything from the time we get here to the time we leave,” he says of the many truck-related tasks. As for the most challenging one? “Traffic,” he says without missing a beat. It’s apparently a universal problem for truck drivers of every sort.

Penske Racing is one of the largest teams on the circuit, and has six of its transporters on site. Four Featherlight trailers with spread axles and air ride suspensions haul the equipment and cars, with Gross Vehicle Weights running between 74,000 and 80,000 pounds. Then there’s the truck and trailer known as RP1, which is Roger Penske’s personal office. A support truck holds minibikes and golf carts that deliver team members around the track. The cars themselves are stored in the trailers’ upper decks, each holding a complete race car with motor, a backup with a suspension, and a spare motor. 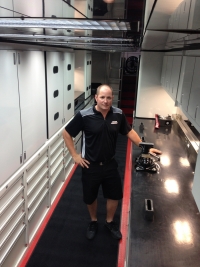 Simply referring to the equipment as trailers would fail to reflect the way they’re used. Four of them interconnect into a single warren of offices, storage and workshops.The gearbox trailer holds workbenches and an office area where the team manager defines strategies and oversees daily operations. This connects to a fabrication shop with a lathe, welder and press, and storage for brakes and consumables. From there a passage connects to the trailer with the engineering office and storage for parts produced in house. Anchoring the far side is the engineering trailer with space for four engineers and their drivers, and double-tinted doors to separate competing teams.

Yingst personally drives Transporter 3, but he has other roles to fill, just like any other truck driver on the circuit. In his case that means focusing on team logistics, and running the jack for the Number 3 car.

As challenging as the races are, logistics represents a significant role for every team, especially as the transporters pass back and forth across the Canada-U.S. border. 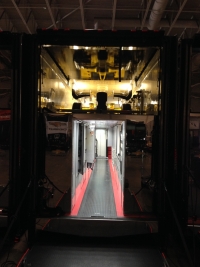 “The manifests are a bit of a hard thing because constantly you’re hauling different chassis, different tub numbers, different engine numbers,” Yingst explains. “In Iowa, we started the weekend out with a motor and ended it on not such a good note, and had to change that. So within the paperwork you have to detail in your manifest how you label all that stuff when you go across the border.”

Van Zant admits that some shipments have been delayed, but nobody has ever missed a race because of it. “If a driver’s licence number is wrong, if a passport number is wrong, there’s some kind of a hiccup or inconsistency in the paperwork, it can be a red flag,” he says. “We take great detail in specifying and instructing the teams on what is needed and how to present the paperwork.” Details like that are shared through memos and an internal website, as well as driver meetings such as one held during a recent stop in Texas.

Hours of Service presents another challenge, depending on how far apart the races are located. Head offices make a difference there, too. “We’re always going back to Charlotte in a day or two turn,” Yingst says, referring to the Penske headquarters in North Carolina. “For us the hard part is constantly watching the Hours of Service and projecting how the weekend is going to turn out as far as getting resets, being able to drive the truck legally.”

The laws governing highways are just the beginning. Transporters also need to comply with strict rules that govern the INDYCAR circuit. The paddock areas are closely measured, with space assigned based on the number of team cars. Four cars can be supported by six transporters. Each gets 30 feet of space in the paddock.

And while everyone is here for a race, the paddock areas also support unofficial show-and-shine competitions among teams. “That starts in house with Roger [Penske]. He loves his trucks. He loves his transporters. And as you can see, he loves things that shine,” Yingst says, pointing to the gleaming trailer doors as just one example.

“They take a lot of pride in their stuff,” Van Sandt agrees. “As far as INDYCAR goes, even the lower teams have a pretty nice setup.”

Team members clearly take pride in their work. Many of those at the wheels of the transporters have been on the job for decades. The driver of Penske’s personal office has been with the team 35 years.

“It takes a certain type of individual to do this,” Yingst says. “You’re gone quite a bit. It’s hard. But we strive for the best and win races, and that makes it a little bit easier.”