The event was a milestone, not only for the companies involved, but for the trucking industry itself as it marked the first ever shipment by a self-driving vehicle in the world.

The self-driving truck was made by Otto, owned by Uber. And the journey was part of a partnership between the company, and Budweiser. 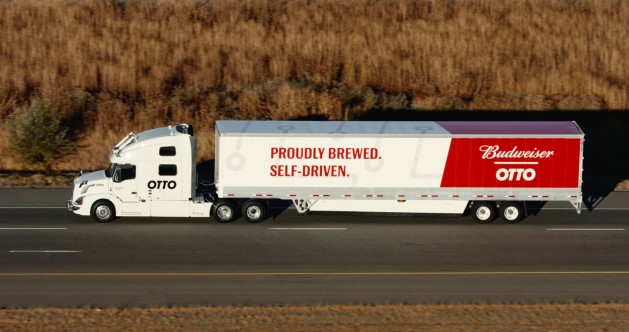 In total, the truck hauled 51,744 cans of beer though downtown Denver to Colorado Springs using cameras, radar and Lidar sensors. Otto said its system completely controlled the vehicle (acceleration, braking and steering) to carry the beer, “exit-to-exit without any human intervention.”

The truck did carry a driver, however, he simply monitored the truck’s progress from behind the driver’s seat while in the sleeper berth.

“This shipment is the next step towards our vision for a safe and productive future across our highways,” Otto said in a statement. “With an Otto-equipped vehicle, truck drivers will have the opportunity to rest during long stretches of highway while the truck continues to drive and make money for them. When you’ll see a truck driving down the road with nobody in the front seat, you’ll know that it’s highly unlikely to get into a collision, drive aggressively, or waste a single drop of fuel.”

Otto added that Budweiser was the best fit for the milestone, as it is committed to safe driving and reducing carbon emissions.

To learn more about the self-driving truck, you can sign up at freight.uber.com or email freight@uber.com.

You can watch the video Otto released of the delivery below: