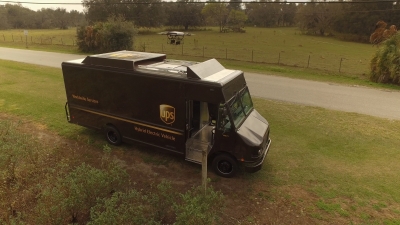 LITHIA, FL – UPS says it has successfully tested a drone that launches from the top of one of its famed package cars, delivering a package to a home and returning to the truck while the driver continues along the route.

The test was conducted in Tampa, Florida on Monday with Ohio-based Workhorse Group, which developed the electric truck and drone used in the test.

The Workhorse HorseFly™ UAV Delivery system includes an octocopter delivery drone that docks on the roof of the truck. A cage underneath the drone extends through a hatch in the truck. The driver loads the package into the cage and sends the rechargeable drone on its pre-set autonomous flight. It has a 30-minute flight time and can carry packages that weigh up to 10 pounds.

“This test is different than anything we’ve done with drones so far. It has implications for future deliveries, especially in rural locations where our package cars often have to travel miles to make a single delivery,” said Mark Wallace, UPS senior vice president of global engineering and sustainability. “Imagine a triangular delivery route where the stops are miles apart by road. Sending a drone from a package car to make just one of those deliveries can reduce costly miles driven. This is a big step toward bolstering efficiency in our network and reducing our emissions at the same time.”

Saving each of the company’s 66,000 delivery drivers just one mile per day over the course of a year can reportedly save UPS US $50 million.

“Drivers are the face of our company, and that won’t change,” Wallace said. “What’s exciting is the potential for drones to aid drivers at various points along their routes, helping them save time and deliver on increasing customer service needs that stem from the growth of e-commerce.”

Last September, UPS staged a mock delivery of medication between Beverly, Massachusetts and an island three miles off the Atlantic Coast. Drones have also been used to deliver blood and vaccines to remote locations in Rwanda.