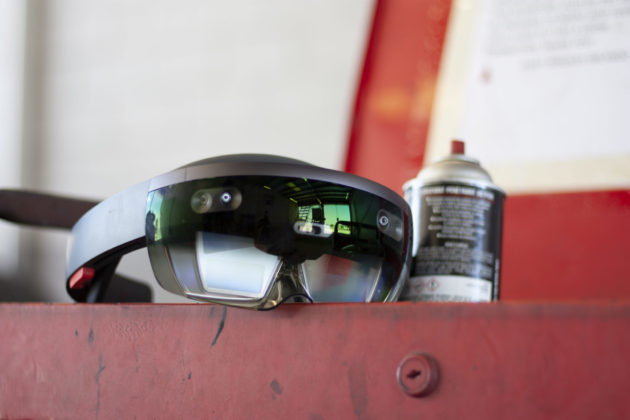 Perception and reality can be more closely aligned than you think. When the general public perceives the work of a diesel mechanic as a low-tech job, that feeds into the reality of an ongoing shortage of people willing to adopt the career path.

“You have to overcome that perception,” says Matthew Johnston, division head for commercial solutions at Design Interactive, a company developing augmented reality solutions for training purposes and daily operations.

Virtual reality (VR) offers a way to “immerse” a trainee in an artificial world, safely replicating a given environment to prompt reactions and analyze the results. Think of a truck simulator or goggles that plunge you on a virtual street, complete with animated traffic and stop lights. That technology is already used for truck drivers, and it could be applied to mechanics and technicians as well.

At a recent truck show, Chevron was using virtual reality goggles to demonstrate the role that lubricants play in truck engines. Philippe Marcil, a bodywork teacher at a Montreal area technical school, also uses virtual reality goggles dubbed SimSpray from a company known as VRSim when making presentations to simulate vehicle paint jobs and attract youth to a career in bodywork. Each time, the virtual reality kit is a hit with the audience, Marcil says.

Meanwhile, Volvo Trucks uses virtual reality-based learning during its worldwide technician’s competition called VISTA. And it proves to be one of the most popular technologies among the technicians, says Jan Strandhede, Volvo media relations director in Sweden.

“This was a new type of experience and a different challenge than they were used to. It also gave them a concrete example of how new technologies like virtual reality can be used in training,” Strandhede says. Volvo dealers and techs could have access to virtual reality tools sooner than later. The company sees it as a “possibility to create a more interactive, true to life, and inspiring self-studies out in the workshops,” he adds.

“Virtual reality is typically used in situations where you want to give people an opportunity to practice stuff, to handle the hands-on part of it, or pretend they are actually doing something,” says Mark Murrell, president of CarriersEdge, an Ontario-based training company.

In contrast, augmented reality (AR) is more of a “see-through” approach, where training material like videos and diagrams are superimposed over real-life vision of actual objects in real environments, Johnston explains.

Kenworth has begun experimenting augmented reality at a small scale at its Chillicothe assembly plant in Ohio, using Microsoft’s HoloLens system. And Peterbilt is working on an augmented reality solution called “AR Tech” to optimize technicians’ understanding of complex truck systems, as if they x-rayed the vehicle. 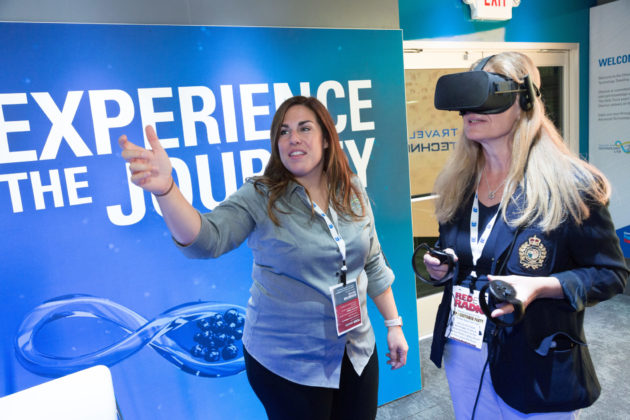 Renault Trucks’ technicians – part of the Volvo Group – are already working with augmented reality in the United Kingdom. The Optiview system they use allows technicians to tap hands-free into various corporate resources such as videos and manuals as they work on vehicles. Voice command is also part of the package.

An potential benefit of augmented could involve students troubleshooting the root cause of uneven tire wear, Johnston explains. Instead of having 20 real tires with 20 different wear patterns hanging on a wall, the information could be displayed in the learners’ headsets. The content would go to the students rather than requiring students to go to the content.

Similar scenarios could be used to show different types of corrosion or cracks on a brake pad. Multiply that by all the different parts on a tractor and you have an idea of the multiple learning scenarios that can be created without trainees actually needing to access physical parts, Johnston says. “That’s the math that I think people need to do.”

While some of this may sound like science fiction, these new approaches are already providing benefits in shops near you. As an example, Penske Truck Leasing recently performed its millionth voice-directed preventive maintenance inspection. The method is both paperless and enhances productivity.

The company is now contemplating augmented reality as a next step for attracting technicians and customers alike, says Mike Hasinec, vice-president of maintenance at Penske Truck Leasing.

He feels augmented reality would be a good fit with other Penske technologies such as the how-to videos the business produces in house, attaching the material to a repair order so that technicians could view the information while completing a repair, Hasinec says. The technician would only need to click the “how-to” icon on a tablet to access the video rather than asking a colleague for the correct procedure. 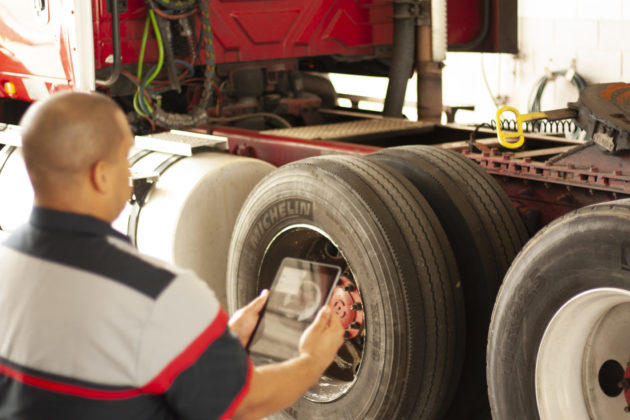 The information is also thought to be appealing for a younger generation of workers that is already used to multitasking.

“Today’s learners may have two or three different input streams happening all at once. They may have an audio track going and they’re watching a video that’s got captions turned on, and they’re sort of scanning some document at the same time. That’s a normal experience for them,” Murrell says.

The new technologies could also accelerate learning curves as well – something that will be particularly important as shops search for a new generation of technicians to replace retiring baby boomers.

“We know we have to speed up our process to get these younger folks that are coming into the industry trained, so that they can become proficient in a much more condensed period of time,” Hasinec says.

Besides, many other activity sectors are coveting the same pool of millennial workers. “We are competing with other industries, not even just in transportation,” says Holly Gerke, director of technical training at Penske Truck Leasing.

That’s why the business deploys as much as technology as it can during career days, trade shows, or other venues where youth can be reached. “We need to find people who may not have known anything about the transportation industry,” Gerke says.

“It is a differentiator in a tight employment market”, Murrell adds, referring to the value of displaying available technology.

But could all the technical layers leave experienced technicians feeling overwhelmed? 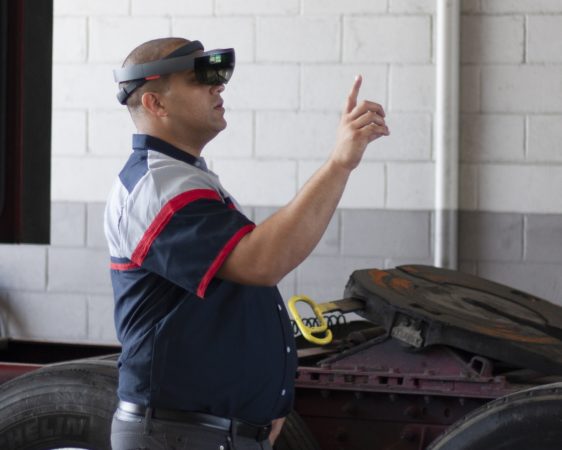 Design Interactive’s Johnston doesn’t think so. “Don’t underestimate your workforce,” is what he tells fleet managers when they ask the question. Older workers have still encountered and mastered many changing technologies over the years.

Those more tenured technicians are the holders of what Hasinec refers to as “tribal knowledge” that no company wants to disappear as people retire. And since augmented reality has proven to be an effective mean of “hands-on-like” remote guidance, mentorship could be made easier. Picture younger technicians on a night shift asking for diagnostic help from a mentor who is sitting at home.

But for any of that to happen, younger people need to put their feet in a shop in the first place, and that’s where the a changing perception becomes vital. “It’s perceived as being dirty, that shops are rough, and that people that work in these places are uneducated,” Johnston says, referring to how the uninitiated might picture a repair facility.

To change that perception, employers could emphasize more of their technological portfolio when posting job offers, says Murrell. Millennials expect the convenience that comes with technology, he adds.

Penske’s Hasinec is confident that youth will demonstrate interest toward the “new and improved” job of a diesel technician. “They removed that paradigm of this being an industry where they’re just going to get dirty and greasy,” he says. 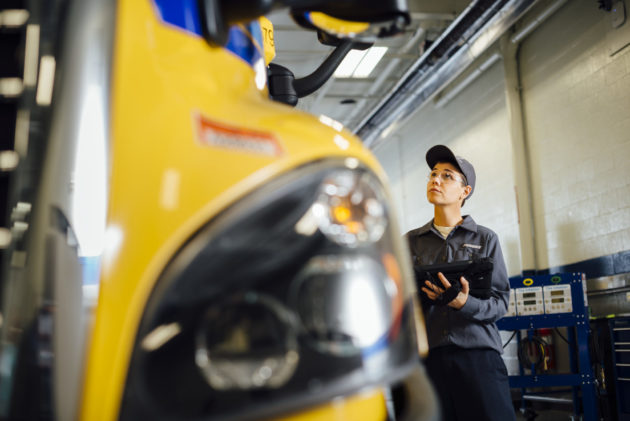 At the same time, maintenance managers need to work on new tools’ acceptance among staff. “You can deploy all the tools you want in an organization, but they’re worthless if the technicians aren’t going to use them,” Hasinec adds.

According to Johnston, fleets that do their homework and crunch the potential return on investment can probably afford augmented reality tools today.

“Don’t assume it’s expensive,” he says, noting how the emerging technology can already provide tangible returns. “The organizations that are considering augmented reality just need to get started.”

Call it a reality check.