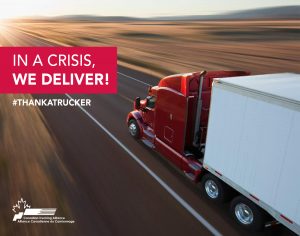 TORONTO, Ont. – The response to Covid-19 is often described in the language of battle. It’s a fight against the virus. We’re mobilizing resources. It’s a wartime strategy.

It’s only appropriate that the Canadian Trucking Alliance (CTA) has come to refer to virus-related meetings of trucking executives and association managers as a War Room.

It’s not a room, exactly. They’re not all huddled around a long boardroom table. In these days of social distancing – and reflecting the need to tap into expertise from across the country — the meetings of Canada’s largest trucking association come as conference calls.

But there was a need for plenty of them, and in a hurry, given how quickly public measures to control the virus evolved.

On Monday, March 9, board members were merely wondering how the spread of the virus might affect a scheduled annual general meeting, says CTA chairman Scott Smith. By Wednesday they knew the question would require a closer look. It was the same day the NBA canceled its season. By Friday there was clearly a need to reschedule the AGM.

That was on the beginning.

“Nobody thought this would ramp up as quickly as it did,” Carruth says. But it did.

“By Friday the 13th, ironically, everyone knew the world was changing,” Smith says, referring to the day traditionally associated with bad luck.

“We wondered if daily [calls] was going to be viewed as overkill.”

Collectively, the group agreed on the need for common messaging, maybe with a few regional nuances to address specific needs. “You saw from time to time, if you had a provincial ministry that went off message … it would cause a lot of angst,” Smith explains. “We wanted to be uniform in the messaging so there was no confusion.”

Between 25 and 30 people dialed into the individual calls. Each covered about six or seven agenda items identified by association staff, covering topics as diverse as border procedures, labor policy, and just about any government announcement that could affect trucking.

“We had excellent participation. Not everyone could be on every call, but it was remarkable,” Carruth says. “We had some high-end topics, and some of them we had to get down into the details to assist the government.”

“One of the key things to me was the staff’s ability, along with the executive, on the onset being able to prioritize the first four or five hot buttons that we had to be involved in.”

The border was clearly an early priority, as they looked to identify what the government would do, and what was merely a rumor. They needed to know how truck drivers would continue to travel back and forth across the international line that was becoming thicker by the day.

The changing border rules were a nervous time, Laskowski says, referring to the government’s decision to ban non-essential travel on March 21.

“We collectively held our breath and we waited for the phones to light up,” he says. As it turns out, the process “went as smooth as could be.”

Laskowski is quick to praise the fleet executives who play a central role in all the work.

“We’re also blessed with some of the best business leaders in the country that are very giving of their time,” he says. “This really has been a significant team effort – it’s not just the staff, it’s from the chairs to the executive members, from the provincial associations.”

Provincial and federal politicians alike have also been open to reaching out and responding, whether in the morning or late at night, Laskowski says. He also credits CTA policy director Lak Shoan for having already established strong relationships with representatives at every port of entry.

“We’ve tackled a lot of issues over the past 17 days,” Laskowski says. “They looked at a common good – what is the common good for the industry.”

The initial surge of government announcements is starting to ease. The War Room itself now convenes three times a week. “At some point we get into a grind,” Smith says.

But there are also new opportunities to leverage the growing public awareness about the trucking industry, now promoted through the #ThankATrucker social media campaign established by CTA staff.

“It’s like nothing we’ve seen that I can remember,” Smith says of the outpouring of public support.

In the meantime, Carruth and Smith also need to focus on how Covid-19 and its economic implications will affect their respective businesses.

“Now we’re settling into how do we get through the grind of revenues dropping, volume dropping, having one-way traffic,” Carruth says.

On March 16, he had 35 people working in the One for Freight dispatching, customer service, and administration offices. Today there are eight employees on site, with the rest working from home. They continue to work on the processes to keep documents on the move.

“We’ve been lucky enough to stay fairly steady,” Smith says of JD Smith, referring to a significant number of clients in the food sector. But there is still work to do, including daily facility audits.

“A lot of it has been contingency planning, best practices for prevention,” he says.

“It’s so brand new and different for everybody.”