Coming this summer: Gas stations running out of gas. So read the ominous headline on CNN.com April 27. But while the article wasn’t foreshadowing the Colonial Pipeline shutdown that made the headline startlingly prescient, it spoke to other risks, including the struggle fuel haulers may have in finding the labor needed to transport fuel to stations as Covid-related travel restrictions are lifted and demand ramps back up.

Who took down the Colonial Pipeline?

Quoted in the article was National Tank Truck Carriers executive vice-president Ryan Streblow, who claimed 20-25% of tank trucks were currently parked due to a lack of qualified drivers, more than double the units parked a year earlier.

The driver shortage is an industry-wide challenge that isn’t new to trucking. However, it could take on a new urgency for fuel haulers this summer – even in Canada – if consumption skyrockets.

“We have robust technology that allows for accurate forecasting, and serving diverse product lines allows us to draw talent from other commodities hauled. The key is to keep in close communication with all stakeholders, including shippers, consignees, drivers, and all other parties involved in the supply chain for fuel deliveries. If rail, other carriers that focus strictly on fuel deliveries, or any other supply chain disruptions occur, then all transport companies will be challenged to meet fuel delivery demand.”

Gasi notes the pandemic resulted in an “almost dead stop” in demand for airport fuel deliveries, and stay-at-home orders negatively affected fuel haulers as a result of decreased consumption. In some cases, layoffs ensued, and the industry could be challenged to bring back those drivers. Meanwhile, new entrants are nearly non-existent because training schools, licensing agencies, and FAST enrolment centers were all shut down. Attracting drivers from other segments is an option, but considerable product handling training is required before they can be productive.

“If provinces fully open, this could cause an immediate surge in fuel consumption, straining the supply chain,” Gasi said. “Companies that are solely focused on hauling petroleum products may struggle to bring back qualified drivers and equipment in short timeframes. They will need to hire new drivers, and go through extensive training and product handling to safely deliver product. This delay in training could cause inventories at fuel stations to be lower or in some cases out of fuel until delivery can be made.

“The unanswered question remains: Will consumers return to traveling immediately when restrictions ease, or will it be in phases?” Gasi pointed out. “The brief history tells us it will be in phases which should allow companies to scale up as volume increases.”

When the diesel went down in Georgia

A lack of fuel hauling capacity isn’t the only threat to the country’s fuel supply this summer. On May 7, the Colonial Pipeline, which transports 45% of the fuel consumed on the U.S. Eastern Seaboard was victim of a cyberattack.

Several truck stops along the pipeline’s routes were temporarily out of diesel, but the gasoline shortage was more widespread due to consumer hoarding. While short-lived, the fuel shortages served as a reminder of how vulnerable our fuel transportation infrastructure can be.

Worryingly, the Colonial Pipeline operators confirmed to media they paid about US$5 million in ransom in order to restore service, which could incentivize future pipeline attacks. The payment of ransoms in such cyber-attacks is not all that uncommon. Canadian cybersecurity firm eSentire cites a survey by Veritas Technologies that found 66% of ransomware victims admitted to paying all or part of the demanded ransom.

“Sometimes it’s the lesser of two evils,” reasoned Mark Sangster, cybersecurity expert with Waterloo, Ont.-based eSentire. “Would you criticize a small healthcare institution in Southwestern Ontario that’s been shut down and can’t give critical life-saving care, so they pay the ransom? On the macro side, it’s the economic engine and the more you pay ransoms the more that encourages criminals.”

Paying a ransom, like Colonial Pipeline did, isn’t illegal. However, the U.S. Treasury has recently put out two advisories, one of which prohibits the payment of ransom to known terrorist organizations. France has outlawed ransom payments altogether.

But he adds paying the ransom doesn’t assure the data will be decrypted and service restored. After all, he reasons, you’re negotiating with criminals when responding to a ransomware attack. Asked if the Colonial Pipeline attack should raise concern about the fuel supply infrastructure’s susceptibility to further attacks, McLeod noted attacks against critical infrastructure were already on the rise.

“Most of those types of companies, because of the critical nature of their business, means they make very lucrative targets,” added Sangster.

Ironically, in 2012 former U.S. Senator Joseph Lieberman warned that “Privately owned and operated cyber infrastructure can well be, and probably some day will be, the target of an enemy attack,” according to Bloomberg News. Lawmakers pushed to force energy companies to strengthen their computer security, but the movement died when the industry lobbied against the requirements.

And then there’s the question of the future status of Enbridge’s Line 5 pipeline, which transports crude to refineries in Ontario and Quebec. Michigan Governor Gretchen Whitmer has made shutting down the pipeline, which travels under the Straight of Mackinaw, a priority.

“The potential closure of Line 5 has not only woken up the politicians but also the media who seem fixated on the threat to gasoline supply and the associated probable price spikes,” said Roger McKnight, chief petroleum analyst with En-Pro. “But it isn’t gasoline that drives the economy, it’s diesel that brings food to the table along with all other forms of commodities the consumer relies on and takes for granted. For the diesel-powered transportation sector there should be concerns if Line 5 is closed.”

He noted not a single drop of oil has leaked from the pipeline into the Straight of Mackinaw, but questions the political willpower to defend Line 5’s continued use. McKnight explained wholesale diesel prices in Canada follow reference point rack prices in the U.S.

“If they increase or decrease from day to day in the U.S., then so do the racks in Canada. If the refinery hub in Sarnia and Suncor’s in Montreal are suddenly starved for crude feedstock then there will be no option but to import diesel and gasoline from the U.S. by rail or truck from Alberta,” McKnight said.

It costs about four times as much to move crude by truck and two to three times more by rail, compared to pipeline.

“The immediate effect of a Line 5 closure would be an increase in the prices of diesel, jet fuel, and gasoline in the range of 12 to 16 cents per liter,” McKnight said. 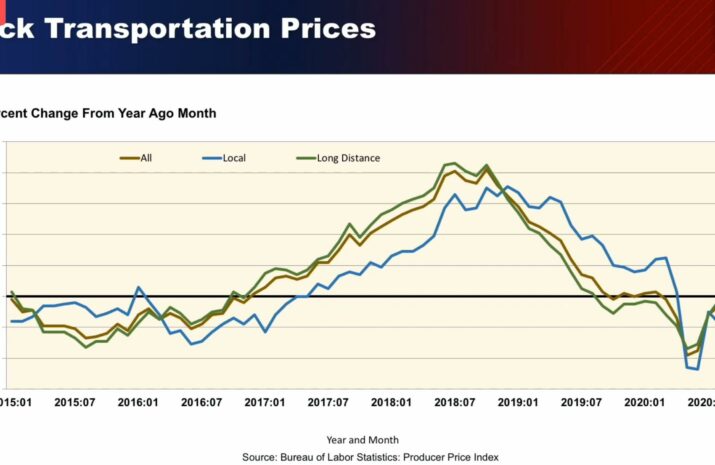