TORONTO, Ont. – Canadian carriers and brokers benefited from a strong market in 2017, and are optimistic about the current year, according to a new report from TransCore Link Logistics.

TruckTalk: Load volumes, investments, profit margins summarizes findings from a survey that was sent to the head of every business in the company’s database. Seventy-three per cent of respondents were carriers, while 27% were brokers.

However, 21% of carrier respondents said the increase in volumes had a negative effect on their business, primarily because they didn’t have sufficient trucks and drivers to keep up. Those carriers cited an inability to find quality, experienced drivers, as a problem.

Only 38% of responding carriers said their expenses increased in 2017, compared to 2016. The survey found 80% of all respondents made investments in 2017. Technology was a key area of investment for carriers, with 71% saying they invested in technology.

Fifty-two per cent of carriers said they invested in trucks, and 45% invested in new staff. Other areas of investment for carriers included: building space; trailers; security; and electronic logging devices (ELDs).

Interestingly, 6% of brokers said they invested in new trucks.

“It is possible for brokers to expand into the carrier sector by purchasing trucks,” TransCore noted. “With freight volumes at an all-time high, brokers may be struggling to find trucks. This could lead them to invest in a trucking division of their own.”

Not surprisingly, carriers with higher profit margins were less affected by the U.S. exchange rate. Seventy per cent of responding carriers and brokers said the “Trump Effect” had no impact on their businesses.

More than half of carriers and brokers felt freight volumes, rates, and fuel prices would rise in the first quarter of 2018. But concerns remain. Changes to NAFTA, the driver shortage, and the ELD mandate were cited about equally as top concerns.

“Even with these concerns, businesses having a positive outlook on the future are certainly justified,” said the report. “The beginning of 2018 showed that load volumes are the highest they have ever been.” 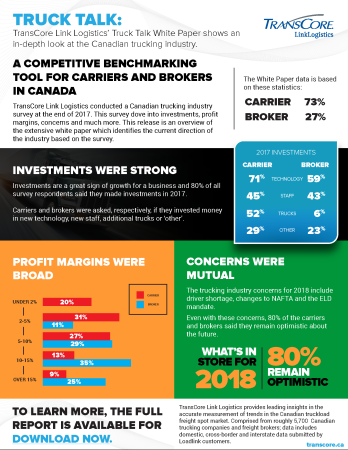