The flatbed sector is leading the way for a surging U.S. trucking industry.

That was the assessment of FTR, which addressed the implications of a tight trucking market in its most recent State of Freight webinar May 10.

“Flatbed is very hot, and we expect loadings to be up 7-9% year-over-year throughout the year,” said Avery Vise, vice-president of trucking research with FTR. “Dry van and reefer are not that robust, but will both see solid growth through the year.”

Vise said the flatbed market is seeing “unprecedented tightness,” while dry van and reefer demand stabilized in April. The disconnect could be attributable to strength in the manufacturing and construction segments, and stronger petroleum prices resulting in more production activity. Or, suggested Vise, it could be the electronic logging device (ELD) mandate hit flatbed carriers the hardest, as they tend to be slower to adopt technologies.

Flatbed rates are up 45 cents a mile since the end of 2017, Vise noted, while dry van and reefer rates have decreased since their peak at the end of 2017 and beginning of 2018.

Carriers on the webinar responded to a poll, with 72% indicating the ELD mandate has had a moderate or severe impact on truck capacity. Only 23% reported a minimal impact, while 5% said there has been no impact.

“The numbers do not suggest any kind of catastrophe related to hard enforcement,” Vise noted.

The greatest impact on capacity seems to have occurred between December 2017 and April 1, 2018.

Looking at ELD violations, it’s the small carriers that have struggled the most. Interestingly, violations dropped sharply when hard enforcement began, indicating fleets either waited until the last minute to comply, or quit trucking when enforcement began.

Single truck carriers have contributed more than 20% of the violations since December 2017, and 40% of all violations were assigned to carriers with three or fewer trucks. Fewer than 1% of violations were committed by fleets with 1,000 or more trucks.

Vise said the truck market in the U.S. should remain strong, as almost all economic indicators are positive. The only concern may be rising inventory levels, but Vise said this could be in response to the tightening capacity and difficulty in getting freight delivered. One cause for concern is rising trade tensions.

“The mere uncertainty over trade can dampen business investment and capital spending somewhat,” Vise warned. Rising gas and diesel prices are also a concern for carriers and shippers.

Truck orders remain robust, but Vise said most of those are to replace current vehicles, not for additional capacity. And those strong orders will take some time to hit the market, with backlogs now stretched to the end of the year. Strong trailer orders are also making it challenging for manufacturers to source all the components they need to meet demand.

All these factors are creating an excellent scenario for trucking productivity. Dry van rates are expected to remain elevated, Vise said, through the second quarter before softening. Contract rates tend to lag the spot market by six to nine months, so Vise is projecting contract rate increases in the range of 10-12% year-over-year in the next quarter or two. Reefer rates should follow that trend as well, while flatbed rates have already seen significant growth and could moderate. 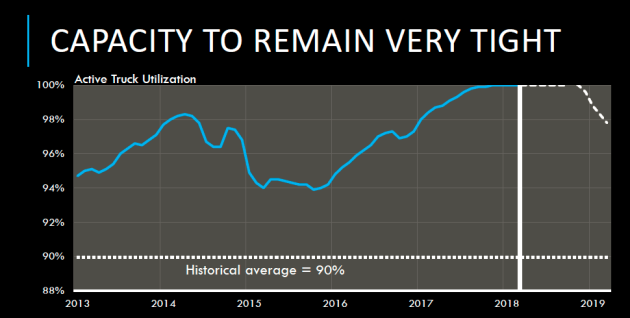