TORONTO, Ont. – Canadian spot market load volumes were in line with normal seasonal trends in the third quarter, and the truck-to-load ratio did not change from August to September, according to the latest data from TransCore Link Logistics. 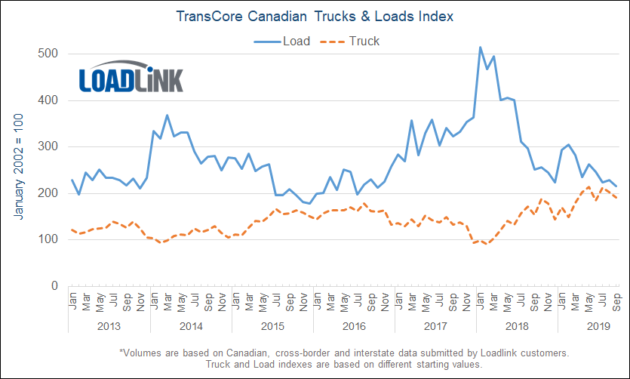 Freight volumes softened in September, following a modest improvement in August. Loads were down 6%, as were equipment postings. There was a rally in load volumes during the final week of September. Most of the decline was due to a 7% drop in cross-border freight entering Canada.

But in the final week of September, cross-border loads into Canada were up 15% compared to the prior week.

The late-month recovery was largely due to jumps in outbound loads from Vancouver, Southern Alberta, and Moncton.

TransCore noted a sharp uptick in loads out of Minneapolis, Minn., with loads from there to Mississauga, Ont., up 225% on the month. Loads to Minneapolis were also up, particularly from Brampton, Ont., Hudson Bay, Sask., and Winnipeg, Man.

Third quarter load volumes were down 10% compared to Q2, and 22% lower than the same period last year. Equipment postings reached an all-time high in the quarter, and were up 25% compared to Q3 2018.

The Q3 truck-to-load ratio was up 12% compared to the second quarter, and up 60% year-over-year. 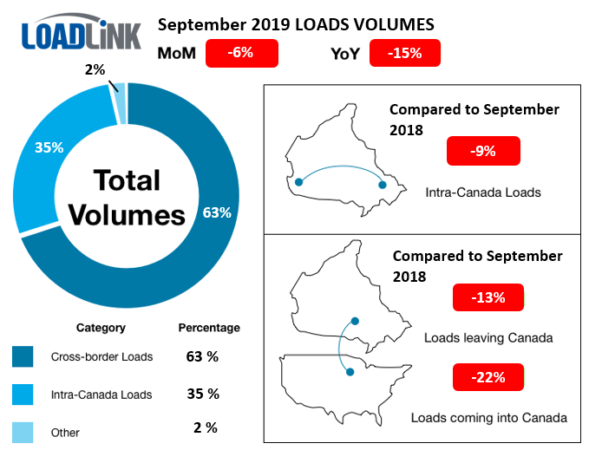