Canadian Tire said the container – seven feet larger than the standard 53-ft. trailer – is the first to be used in North America, and will serve as an intermodal solution to increase productivity and efficiency, as it allows the retailer and CP to transport more products – 13% additional freight – as well as reduce transportation costs and greenhouse gas emissions.

The larger containers are currently only regulated for use in Alberta and Ontario, and the demonstration of the 60-ft. container in Calgary was the kickoff for its first venture onto Alberta roads.

“Things like LCVs (long-combination vehicles), the acceptance of those grows over time and I think this will be no different,” Jonathan Wahba, vice-president of sales and marketing for CP, told Truck West. “This is the next evolution of 53-ft. containers to 60s, and over time it will evolve.”

Wahba said when LCVs were rolled out in Ontario, there was engineering that was required to on- and off-ramps, but that will not be the case with 60-ft. containers.

“With LCVs there were certain routes that you could travel and only certain interchanges that were approved by the government where you could make the turn,” said Wahba. “With (60-ft. containers) that engineering is not going to be required.”

Neil McKenna, vice-president of transportation for Canadian Tire, said his company has one of the largest transportation networks in the country, moving more than 100,000 different types of products to 500 stores in Canada.

“Our supply chain infrastructure is one the most modern in Canada, capable of supporting growth and efficiently managing the increasing number of products we transport,” McKenna said. “This new configuration will enable us to increase the volume shipped in each container by 13%, which ultimately allows us to carry more good per trip, resulting in an improvement in service to our stores and our customers.”

McKenna highlighted the non-extendable 60-ft. chassis that was on display at CP’s Intermodal Terminal in Calgary – six of which are currently on the road – as well as the expandable chassis, which goes from the standard 53-ft. length to 60-ft., which takes seconds to expand, which was revealed to Truck News in Quebec.

“At CP, we are constantly looking for ways to do our business better, safer and more efficiently in order to serve our customers and the nation’s economy,” said Wahba. “In Canadian Tire, we have found an innovative partner that shares our passion for customer service, sustainability and safety.” 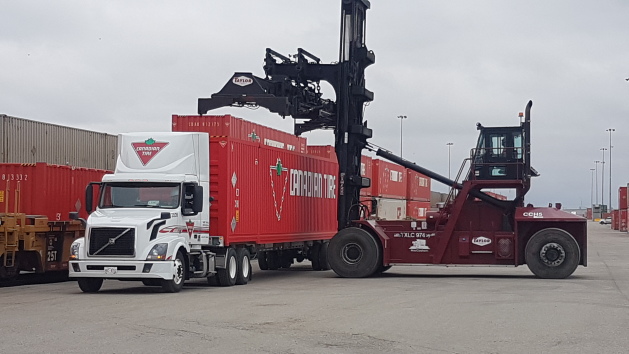 Canadian Tire and Canadian Pacific roll out the first 60-ft. intermodal container to be put on Alberta roads in Calgary, Alta. April 26.