PUERTO VALLARTA, Mexico – Freightliner strengthened its Mexican market share in a soft market and is anticipating a stronger end to the year as a new administration takes the helm. 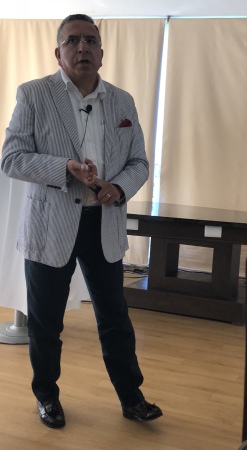 The country saw GDP growth of about 1.5-2% in 2018, and the transportation industry was stable but didn’t experience exponential growth. Rivera attributed this to the election.

“This led us to have a first semester of 2018 that was very calm and after our elections, and during the second semester of the year, the industry took a new dynamic,” he said. In Mexico, the transportation industry accounts for 5.5% of the nation’s GDP. There are 145,000 transport companies there, 80% of which are referred to as “man trucks” – or small operations comprised of one to five trucks.

The total truck population in Mexico is 530,000 units with an average age of 17 years. The country in 2019 will adopt EPA10 emissions standards, but challenges remain, such as the availability of ultra-low sulfur diesel. About 69% of the trucks in Mexico don’t yet comply with the current EPA04 emissions standard.

“So, the challenge we have for our transportation services and for our country is the truck renovation,” said Rivera. “We need to remove these trucks and use new ones.”

Daimler’s approach to this is to bring technologically advanced trucks, such as the new Cascadia, to the market. Fuel has increased in price by 92% in the past six years, and now represents 57% of the total cost of operating a truck. Freightliner is hopeful rising fuel costs will help fleets see the value in buying newer, more efficient trucks, which are also better for the environment.

Its Classes 6-8 market share is now 40%, up from 24% as recently as 2014. Rivera credited the company’s dealer network consisting of 110 service points for the growth. The company is now the leading brand in 26 Mexican states, up from just eight in 2014. However, Rivera cited research that shows 17% of Mexican buyers are focused on purchase price, with an average fleet age of 22.2 years.

Most buyers, 66%, are looking for better performance out of their trucks and are willing to invest in safety technologies. Their average truck is 9.6 years old. Another 17% are “progressive” fleets, looking for the most advanced technologies and have an average fleet age of 4.4 years.

Rivera expects the new Cascadia, made available here only in November, to be popular among those buyers. The company has also taken steps to capitalize on the growing popularity of cabover engine trucks, which make up 20% of the market. They’re especially popular in the smaller Classes 6-7 segments.

“We are sending a message to the industry that is very important – the global presence of Daimler,” Rivera said. “This vehicle with German technologies, manufactured in Asia and distributed in Mexico is a clear example of how a global company can be in markets such as the Mexican market because of its diversity.”

Rivera welcomed the new trade agreement between the U.S., Canada and Mexico, and said there are no plans to change Daimler’s production locations as a result of it, or tariffs imposed by the U.S. It has two truck production plants in Mexico and employs about 8,000 people in the country.